Cherry Cupcake Cake Cooking is an Android port of a Flash game by Girl Games Plaza, a site apparently dedicated to keeping women in the kitchen by making cooking simulations and dress-up games their only form of entertainment. And by “port,” I mean a direct copy and paste of the code with no change for screen resolution.

As a rule, simulations exist to give players a chance to experience things they never would otherwise, such as running a game company in Game Dev Story, or leading a meaningful and productive life in The Sims. It follows that GGP made this redundantly-named simulation for those poor souls incapable of actually making cupcakes for themselves. These people likely have fragile, pin-sized fingers that couldn’t lift a bowl without snapping in two, which would explain why the game’s buttons border on microscopic sizes. 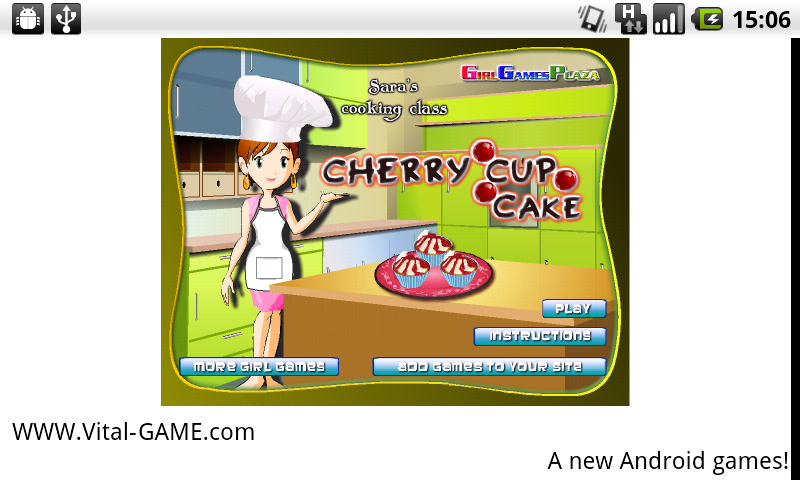 The first major challenge involves getting past the title screen, which boasts buttons unflinchingly resistant to the idea of working. At first, frantically tapping at the millimeter-high “play” button accomplished nothing but making the attractive woman sitting across from me slowly make her way to the other end of the room.

The idea of writing the game off as broken like all three reviews in the Android market tempted me.  But I make a point of going the extra mile in my search for all things awful and scorn-worthy, and after the finger-tapping equivalent of a drum solo to the beat of the eleven-note title song, the screen realized that I might actually want to play, and faded out at about three frames per second to reveal the game in proper. 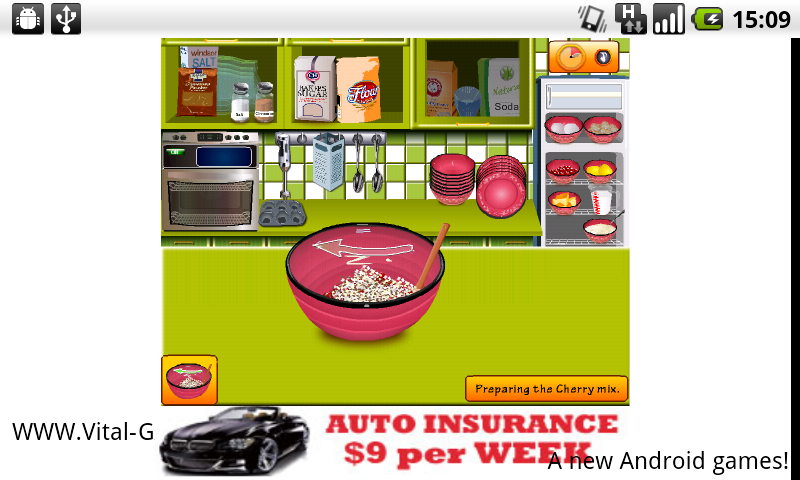 Pretty sure this doesn’t mean “Spaz out.”

The main crux of the game involves getting ingredients out of the cupboard or fridge according to what a little box in the corner tells you to, then dragging them around until you reach the exact point where the game decides that, yes, you do in fact want to put the bowl down on the counter rather than flail it about the kitchen like a madman.  There’s also points where you have to do something involving following an animated arrow, though I found that randomly scribbling a finger back and forth over top of it works better than following whatever the arrow is trying to tell you.

Then there’s the oven.

After I fumbled the oven open and flailed the mix around enough to get it inside, I realized I had no idea what to do next. The little instruction box still showed a picture of the oven, but my elite tapping skills didn’t manage to register any reaction. Never one to let a complete lack of functionality keep me from playing a horrible game, I loaded up the online flash version and tried to figure out what I needed to do.  It turned out that I was supposed to hit the oven’s “on” button, which was about half the size of a grain of rice on my phone’s screen.

After tapping a faithful recreation of the drum solo from In-A-Gadda-Da-Vida on a button with a label so small I mistook it for an attempt to make the button shiny, the oven’s finally turned on. After the timer counted down, the batter miraculously teleported itself back the the refrigerator, teaching impressionable young players that while it’s important to take everything out of the fridge first, you never have to put anything away. 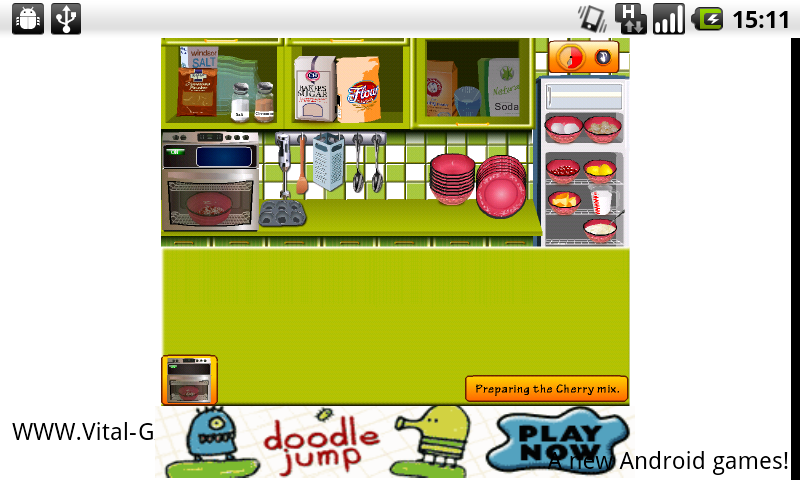 Yeah, good luck with this one.

After a few similar phases of ingredient-flailing, squigglefests, and conspicuously-absent clean-up, the game decided that even it was tired of this crap, and refused to let me move on to the next step.  I tried the game again three times, and once again on the online version, but it always stopped working before I could behold my digital cupcakes in all their baked glory.

Since this meant I could stop playing, it brightened my mood considerably.

But to my horror, when I hit the home screen button, the game’s music continued playing through the phone’s speaker, serving as a haunting reminder of my dreadful experiences in its digital kitchen.  I needed to restart the game and exit through the menu to keep the ear-grating tune from infecting my phone until the end of time.

It could be argued that this game was meant to be played on a tablet, where the buttons could conceivably be finger-sized.  But that would imply that the game was “meant to be played,” rather than “meant to be deleted from every device in existence while a team of train professionals hunt down the developers in a quest to administer their own brand of justice.”

But, on the off-chance that this game sounds like the kind of way you want to waste your afternoon, you can pick it up off the Android Market for free.