WipEout is the undisputedly fore-running futuristic racing game on any platform. Hence, it comes as no surprise that others would try to imitate it, and build upon its success. Enter Flashout 3D, a futuristic racer that bears an uncanny resemblance to WipEout, mixing racing with combat. Keeping aside its somewhat obvious similarities with WipEout, how does Flashout 3D fare in its own right?

The main meat of the game is the career mode (there’s quick race and time trail too), which features seven cups in all and they get progressively harder. To win the races, you’ve got to be good in both the racing and combat aspects of Flashout 3D. There are boost pads and shortcuts hidden behind barricades that can give you a vital edge over your opponents. There are also random power-ups (such as shield and boost), and special switches that activate the upper levels of the racetrack. 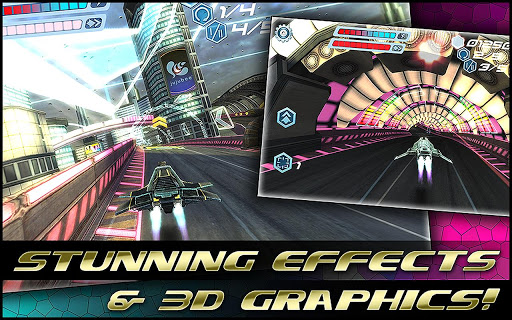 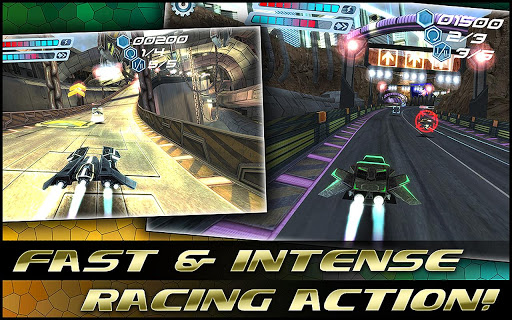 As for combat, your ship is equipped with two weapons – machine guns and missiles. The weapons auto-lock on your opponents once you are within a given range, but you will need to time them nicely as your opponents will strafe to avoid fire. Likewise, once you come under fire, you’ll need to strafe too. Ammunition is limited but can easily be refilled by picking them up on the racetrack.

Your ship gets destroyed if it takes too much damage, and you’ll be adequately punished with a slow respawn while painfully seeing your rivals whiz by. The combat can be difficult at first (both attack and defense), and it will be especially heartbreaking when you get destroyed right before the finishing line. But with practice these frustrations will go away. In fact I got to the point where I raced alone at the front, so I never got to see much combat at all beyond the initial stages of the races.

Gold coins are scattered around the tracks, and you will need to collect these in order to purchase new ships or upgrade. Frankly, the upgrades are useless as they don’t improve the speed or handling of your ships. Instead, they are power ups or ammo that help to give you a head start in races. If you’re good enough these aren’t necessary at all. The only other way to earn gold is by winning cups. You can get them via very reasonable IAPs too, but you can get enough from the game so these aren’t a necessity. 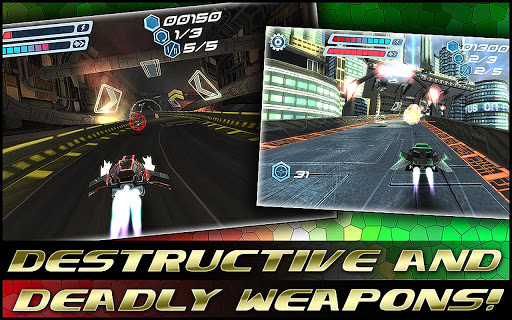 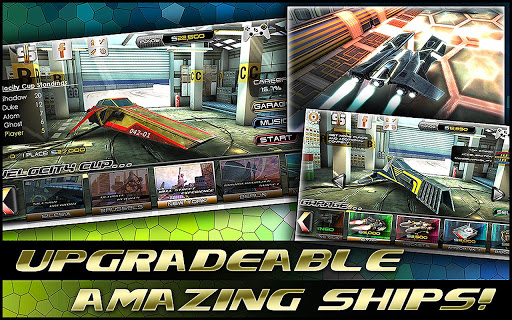 One aspect of the game which Flashout 3D has nailed really well is the choice of controls. You’ve got tilt-to-steer, floating joysticks and on-screen buttons, each with a variety of configurations. Your ship accelerates automatically, so you don’t have to worry about that. There is a brake button, but this is fairly redundant since you can go round corners at full speed and I have only ever used it strategically to let my opponents move ahead of me.

Graphically, the game has got this futuristic look and feel to it. The tracks are lined with pulsing neon lights, and there are some nice background animations on certain tracks as well as familiar landmarks such as the Birds Nest Stadium in Beijing. As for the audio, the techno soundtrack is pretty good, though I find the sound effects (such as when your ship gets fired on) to be slightly disappointing.

Some of the negative aspects of the game include a lack of variety in the weapons department, tracks that look and feel similar to one another, pixelated track surfaces, lack of air brakes and too few opponents (only four of them). There is a bit of a learning curve to master the controls too since the ship has a weird handling. The game does encounter stutters here and there, but it’s not game breaking.

There is a bit of depth in Flashout 3D as you explore the full extent of the tracks, but the racing and combat aspects of it could still be more fleshed out. Despite its limitations in the gameplay department, I did enjoy the game and it isn’t overly complex for the mobile audience. The handling of the ships may seem awkward at first and make the game appear harder than it should be, but once you get the hang of it Flashout 3D is well worth the one play through.