Over the last few days I’ve been really busy. As soon as I thought I was going to get some time to enjoy a game, what ended up happening is something else turned up that required my attention. There was just no way for me to actually take a decent amount of time to play a game. And here is where Pixel Dungeon came to the rescue.

Editor’s Note: This is a community submitted review. If you want to check out more from this author feel free to check out CrisR82’s blog over on the DroidGamers community forums and blogs.

Pixel Dungeon is a roguelike turn-based game, with (as the title suggests) pixel-art graphics. The game puts you in a randomly generated multi-level dungeon filled with monsters ready to turn you into a pile of bones. For those of you unfamiliar with roguelikes, let me explain:

The gameplay is essentially based on a simple idea – you progress, you die, you start over. Unlike traditional RPG games, here death is part of the game. Roguelike games are generally accompanied by as many randomly generated elements as possible, which is nearly guaranteed to keep your interest though the many hours you might end up playing. Well, the twist with Pixel Dungeon goes beyond that – the item and weapons are randomly generated as well. Just because in your first play though a blue potion heals you, doesn’t mean it won’t set you on fire the next time you play through the game. 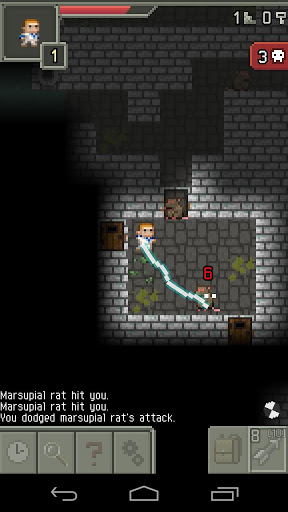 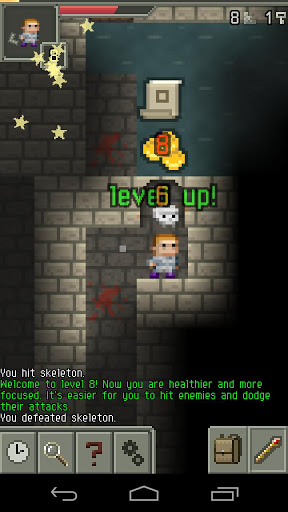 As I mentioned before, this game is turn-based, which means unless you move – monsters and game time in general doesn’t pass, which is important to know since in this game you also have to keep an eye on your character’s hunger – if you’re starving, you’ll start to lose HP.

The game starts you off on the first floor of a 15 floor dungeon (which will be expanded in future updates according to the developer), with a basic melee weapon, a shirt and one ration of food. On that floor, players will be fighting rats and encountering an occasional trap. Players should take advantage of the easy difficulty of the first three floors and fully explore them to obtain as many items and as much experience as possible since later on this can become really hard to do. The deeper levels contain different and stronger monsters include fox-like creatures, crabs, skeletons, wraiths, and bosses, all with their distinct movement and attack speeds.

Items are pretty varied: HP potions, stat bonus, fire potion (which is either thrown at enemies/doors or consumed to burn yourself), poison potion, enemy visibility (which shows you the location of all enemies on the floor), upgrade scrolls, random teleportation scroll, map reveal… there is just a lot. And each run, the graphic representing the item is switched to make it much more daring – will you gamble your last few HP points on a potion that may heal or kill you?

Weapons and armor though work a bit differently – there are a few types, but when you find one, it’s not identified. These can end up being either normal, carry a specific bonus, or be cursed which will have negative effects and can’t be removed unless you upgrade it.

Design wise, I’m personally pretty happy with Pixel Dungeon… just simple pixel-art graphics. They are clear and represent everything just fine regardless if you’re playing on a small phone or huge tablet screen. While you might begin to think that the tiles are a bit repetitive at the beginning of the game, they do change once you start accessing the deeper levels. I would’ve preferred it if after each boss it could vary the dungeon aspect a bit by switching the wall materials earlier in the game, similar to how old-school dungeon crawlers used to. I should also point out that a couple of updates have changed some graphics and effects already so we will see where it goes.

I should also mention that the game uses some “realism elements” such as vegetation blocking your view, ability to set vegetation/doors on fire (and they will burn down, which is required to acess certain secret areas) and water removing the fire from you in case you decided to drink a fire potion.

Now I guess I should talk about the monetization and business model… well, get this – it’s free… and I mean fully free, no ads, no IAP, no purchase. I’ll be honest here, for the quality of this game, I’m pretty surprised. It doesn’t feature any fancy effects or anything, yes, but I’ve seen games which are by far inferior to this one yet they have a $1 price on them. I applaud the developer since it takes a lot of guts to make a decision like that.

Overall, this is a really good game to play while waiting at the bus stop, waiting for your turn to see the dentist, or if you just have 10 spare minutes. Of course it is also good if you’re really into roguelike games like me – just drain half your battery with it in the afternoon. I was trying to think of a complaint to post about it and the only thing I could come up with is that the first boss might be a bit too hard for most players. I just can’t think of anything else wrong with it or out of place.