Earlier this year we covered some of the Kairosoft games that we were hoping to get translated and ported to Android OS. Kairosoft has released the Japanese version of their new farming simulation loosely translated as Firmament Hectare Farm to the Play Store. The game seems like it is more of a sim management game unlike thier last release Ninja Village. It focuses more on growing and selling foods and trying to become the number one farm. During your growing of vegetables and fruits you will have to attract tourists by building facilities and for them to stay at and use. As usual there will be the contests to see which farm grows the best quality items and becoming more profitable.

Now I am playing the game in Japanese so I don’t quite understand everything that is being said in the game but I can tell you a little bit about my experience with it thus far. The game starts you out on a small plot of land with two farm houses and a some fields to tend as well as what looks like a food stand. Off the bat you can build fields and those can  grow carrots, strawberries, and tomatoes. You can also build more housing for more farmers and the usual flowers that buff up stats of what you set it down next to. You can also outfit your farmers with various clothing and equipment that will help them harvest and grown better foods. 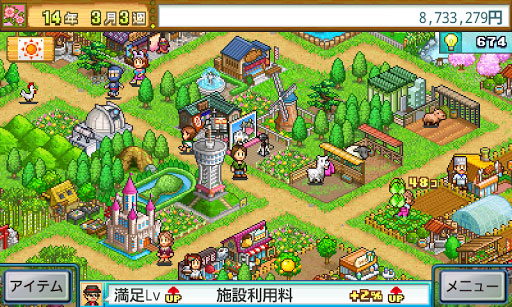 Like most Kairosoft games there is a icon that represents what you can spend to upgrade and train new skills or improve your fields and this is represented as a light bulb. You gain more of these as your farmers tend to the crops and visit the food stand (if that’s what it is).as well as gain money from what I assume is selling the crops. There seem to be different seasons and each brings different weather which again I assume effects how your crops grow. I do notice that, like Ninja Village and Epic Astro Story, there seems to be different sections that you can unlock for a price. This give you more room to build and expand your farming as well as unlocking people that need particular foods. These people will also help you unlock new items or vegetables and fruits if you can help them. At the end of each year you get ranked on how well you did and what your ranking is.

So far the game seems to move along at a decent pace with events happening frequently enough to keep things moving. The animations are still the cute pixel art we all have come to expect from Kairosoft so even older devices should have no problems running this game. If Kairosoft sticks to its usual routine we should see a English translated version of this game in the next month or so, but If you curious to get a head start or can read Japanese you can head to the Play Store and pick it up now for $4.65. One final note, when the game does land on Google Play for everyone, it will most likely have a name change to something a lot better sounding.