In our earlier article about Supercell’s revenues for 2013 and this year as well, we mentioned that the company was gearing up to release a third game called Boom Beach. Interestingly enough the company is labeling this a ‘risky’ game as in they have made some choices that they deem as risky, eluding to the possibility that it may flop as a game if players don’t like these development choices.

Of course when you’re making $5+ million a day from your other two games, you can afford to take some risks with your next title. So what exactly  are these risky choices in Boom Beach? Well basically the company is straying from their tried and true format of clans and combat to something else. As Supercell CEO Ilkka Paananen states: “There aren’t any clans in the game and the combat mechanic is different to Clash of Clans.“ 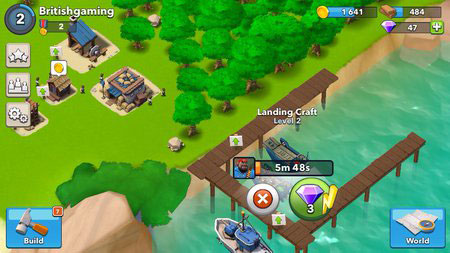 Even though the game has no clans and different combat, the focus of the game is basically the same as Clash of Clans. This time around though you have tiny little soldiers instead of Norse warriors and that combat is done on beaches on different tropical islands in Boom Beach. Other than that there isn’t a great deal of difference between the two games, at least from what we can tell right now.

Supercell has Boom Beach for Android slated for release sometime in March if all goes well. It will also be free to download when it is released.