OrangePixel has been working on a new game for mobile called Space Grunts and has been recording the entire process of building the game. Well most of the process. Anyways, each week OrangePixel releases a new video showcasing the work done to the game during the past week and today there is a new video to check out.

For those of you who missed our previous coverage regarding this game, here is the quick and dirty explanation for Space Grunts. Originally this game was actually going to be a sequel to Heroes of Loot. However, along the way Space Grunts has evolved so much that it is now very different than Heroes of Loot so OrangePixel has decided to rename the game to Space Grunts and make it a totally new IP instead. Space Grunts is a dungeon crawler style of game similar to Heroes of Loot except that it is a hybrid turn-based / arcade shooter. Making a hybrid of this nature is pretty difficult for a variety of reasons so OrangePixel is documenting the entire process.

In Week 5 OrangePixel has appeared to make some pretty good progress in the game’s development. Space Grunts is starting to look quite good. Of course you have to be into the whole retro-style of games. The video is 5 minutes long so be sure to pick a seat and relax for a few minutes while you watch it. There are actually about 4 more videos OrangePixel posted this week relating to the game’s development, all of which are available on their YouTube channel. 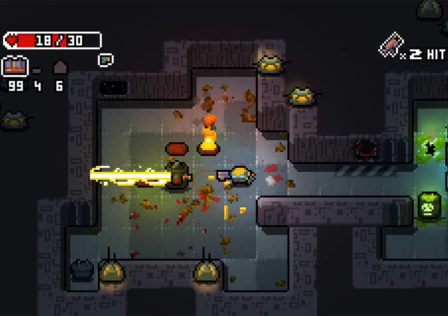