Deus Ex: The Fall is a First Person Shooter from Square Enix. There’s more to this game though, as fans of the series can attest. The game includes elements of stealth, computer hacking, RPG customizations, and moral decisions within the gameplay. The story also has several different threads to it: crooked pharmaceutical companies, whistleblowers, rogue paramilitary groups, assassinations, human augmentation, and more. All in all, it makes for an intriguing story.

The setting for Deus Ex is near-future, a few decades out from the present day, and played out primarily in Panama City. Players assume the role of Ben Saxon, a former British soldier, who has been physically augmented in a world where said augmentation is increasingly becoming the norm. In this world, augmented people require a drug called Neuropozyne, in order to keep their bodies from rejecting the augmentations. At the time of this game, there is a worldwide shortage of this drug, forcing Saxon to go in search for more, as withdrawal has several negative side affects in addition to forfeiting the use of any augmentations. 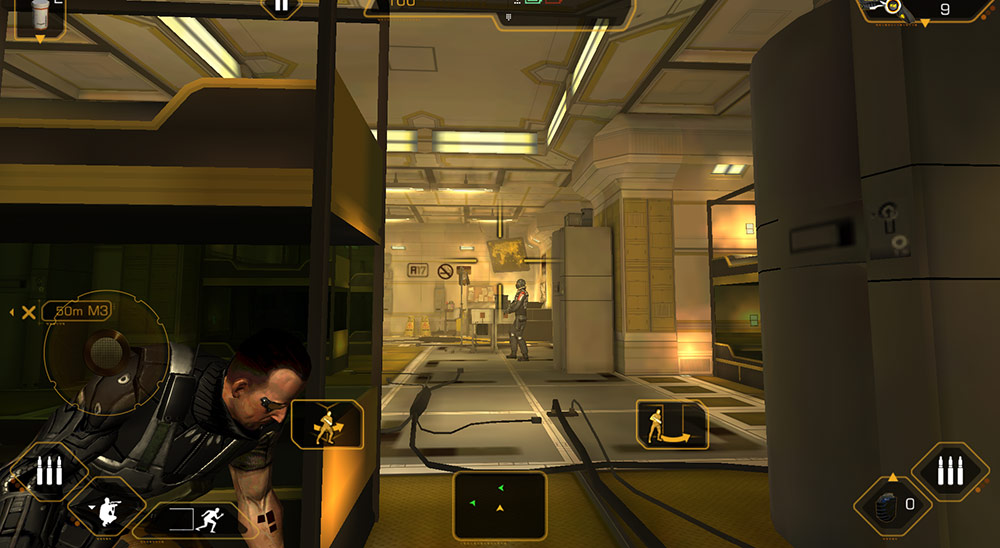 At the start of the game, he’s in a safehouse with an associate Anna Kelso and is recounting how he parted ways with a black ops unit that calls themselves the Tyrants, only to see Anna begin to react to her lack of Neuropozyne. This kicks off the players venture to acquire more, and in doing so, begin to sniff out all the corruption. While the end of the game doesn’t wrap up the story as neatly as as I’d like, what they give you is quite intriguing and worth playing through. As an aside, there was adult language used within the game, if that’s a concern for you.

**SPOILER: Here’s why I find the ending so inadequate. Without a warning up front, the games ends on a cliffhanger, with some dialogue from both villains and Saxon, then credits begin to roll. In the game’s main menu, there’s an option for “more content”, but selecting it simply brings up a promise for more to come soon. I think gamers would be better served if they indicated that this was part 1 of something larger, but they clearly whiffed on this, since nothing was indicated on the Google Play page, nor at the outset of the game.** 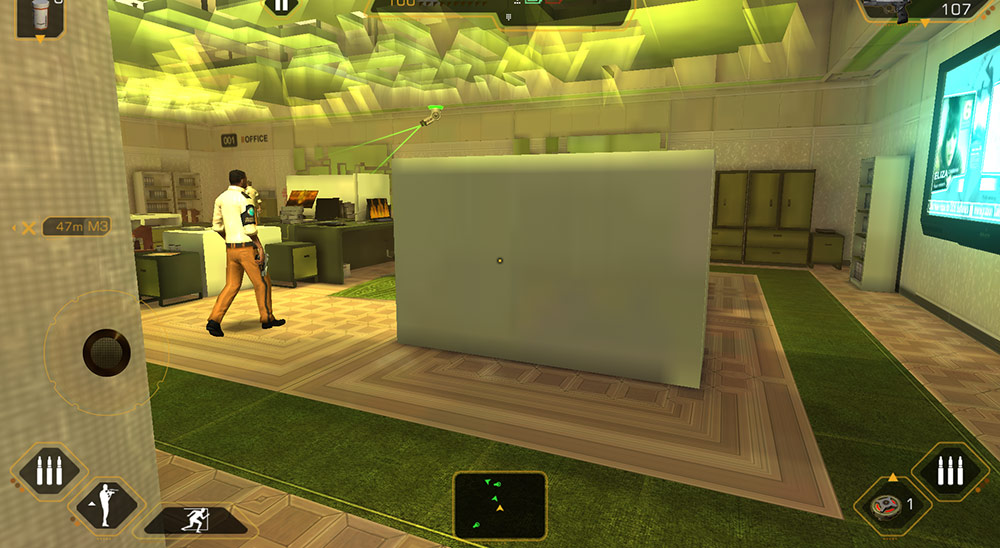 The controls for the game are fairly straightforward, and are nearly identical to what most shooters use on mobile these days. Swiping on the left controls steering, while doing so on the right controls looking/aiming. There is a button to fire the selected weapon is in the lower right, and an option yo add an identical one on the left. In the upper and lower corners, there are some quick-select menus, with the left one being for items and augmented abilities, and the upper right menu for firearms and lower for ordnance. For the level of difficulty in encountered in the game (and there aren’t multiple options, you simply play through the level that the game is set to) they served me well most of the time, and I have no complaints.

There is very little for a soundtrack, as eavesdropping plays a small role in the game. And given that players can use sounds and chatter to their advantage, the sound in the game is directional. If there are soldiers to your left that are conversing, you’ll here it from the left channel of your headphones. This is quite handy, if a player has selected to go the sneaking route, as opposed to the frontal assault route. And that choice (among others) is partly why I enjoyed this game so much. They leave a lot to the users to choose how they want to achieve an objective. Players can choose their arms, such as tranquilizers or bullets, stung gun or shot gun, etc. How exactly to proceed through a map is optional, as there’s usually several ways to get yo your objective; players can walk through the front door and risk a shooting war, or try to manipulate the conversation to get the bouncer to let you in. Don’t like those options? Sneak in the back, provided you found the code to unlock the door, or would simply prefer to hack your through the gate. 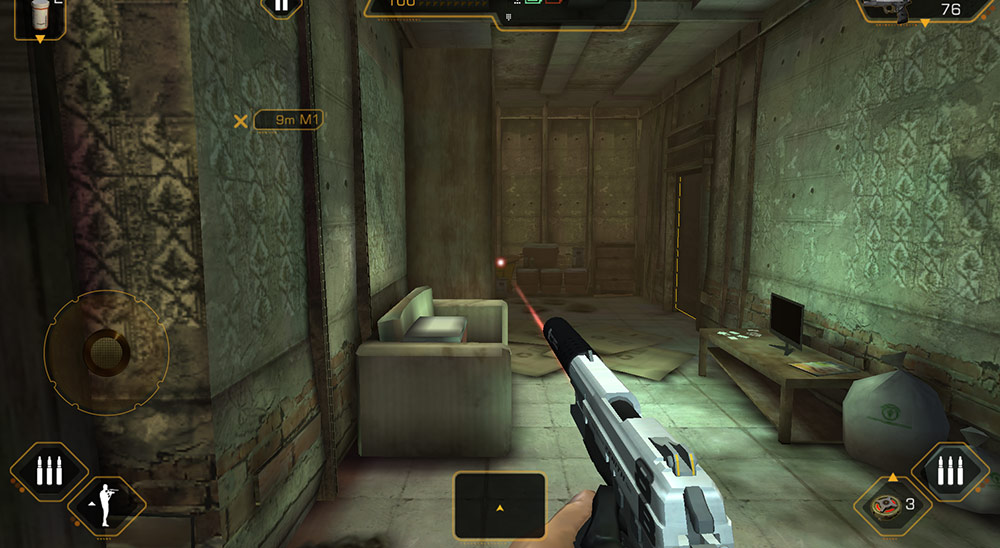 Players can walk down halls in the open, or find ventilation shafts to sneak around areas that seem problematic. Players can choose which augmentations to upgrade. One can have Saxon be strong enough to punch through a wall and hit the soldier on the other side, or enable x-ray vision to assess threats before encountering them; destroy the robot or turn it against the enemy soldiers, the list goes on. Each of the upgrades costs one or two points, with the player being awarded one at each level up, finding them hidden through out the game, or spending in-game currency on them, with this allowing players to pick up a new upgrade, when in a pinch. Having this level of customization leaves the player a lot of liberty in solving problems, as well as opening the door for replay. Play through once as a bruiser, then again as a sneaky hacker. And the furtive behavior in the game is very enjoyable, given how alert the enemies can be at times. For example, an overhead security cam can alert them to your presence. Fair enough.

I got clever and shot out the camera, thinking that doing so would help my chances in avoiding detection, only the security guards noticed that too and started wondering what happened. Deus Ex: The Fall uses a Metal Gear style radar system, at least with the color coding of an opponent’s awareness. So I was pleasantly surprised to see an enemy go from green to orange, and make an inquisitive comment to himself, once he noticed that I’d shot out the camera. Well done, Square Enix. Well done. 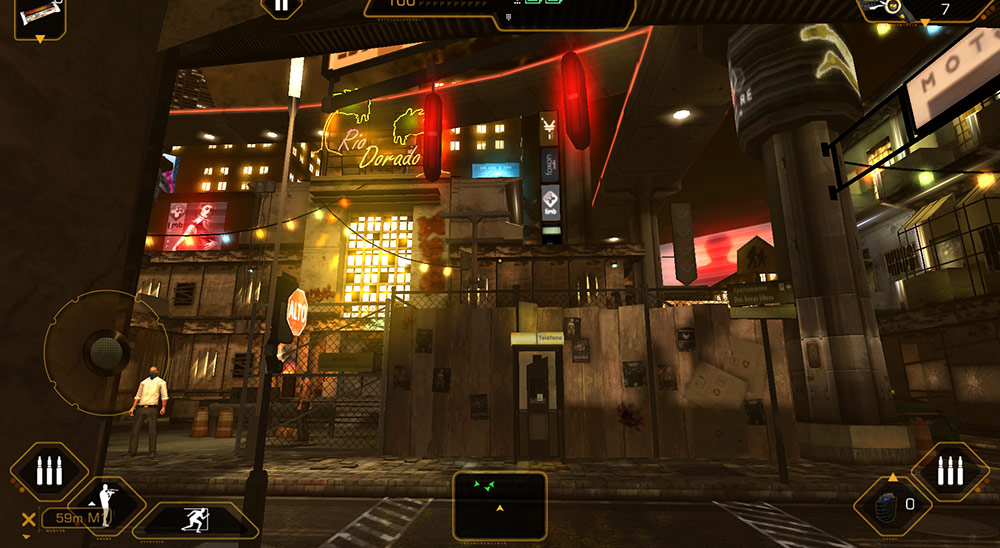 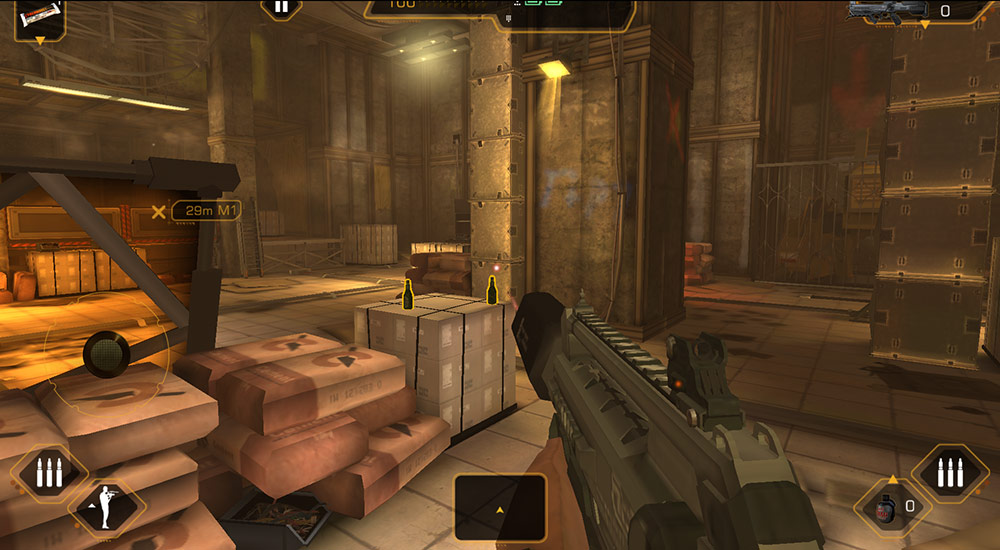 Here us where I’ll mention the few snags that I saw in the game. First, for most of the game, every child color is some derivative of yellow, but that appears deliberate. Browns, golds, oranges, and yellows seem to be the choices for the color pallet, with most of the remaining colors used as an accent, until late the game. It’s not necessarily a bad thing, it just has a bit of a monochromatic feel to things. On a couple of occasions, as I had my character peaking out around a corner, what would have been the proper perspective of a larger room, appeared dark and static-like. Having my character look around cleared it up with no problem, but it happened twice.

Lastly, near the end of the game, my character was being chased by a handful of security guards who were shooting at me. After rounding a corner, they all disappeared without warning. I went back to see what happened, and they reappeared right in front of me, and were still discharging their firearms. When I turned to run away again, they disappeared. Not sure why, especially as that was the only instance. So on the whole, it’s a small collection of of random (and unrelated?) bugs. No one big killed it outright for me, but all together I’m compelled to mention them.

Given how well the game is on the whole, and how much fun I had while playing it, it’s difficult for me to NOT recommend it, especially since they’re only asking for $0.99, though there are IAPs. Oddly enough, I never felt like I was being farmed for cash, and once I got past the early going and had a few skills developed, so this is one to take a flyer on, especially nightly like Sci-Fi, first person shooters, and Action-RPG games.