Oddworld is a successful video game franchise that has been released by a handful of developers, and has been around nearly twenty years on various platforms, with this game debuting for the original Xbox in 2005. This was a franchise that I’d heard of and was vaguely familiar with, yet hadn’t experienced any (coming in “clean”, in essence). I was looking forward to reviewing this one when I saw that it went on sale, so let’s see what I walked away with.

Within the franchise, all the games (including Stranger’s Wrath) are set on the same planet, Oddworld. Within Stranger’s Wrath, I found things to be…well, odd…in a good way. For example, all its inhabitants have the appearance of anthropomorphized animals, most of which are recognizable. There are chicken people, lizard people, and so on. They all seem to talk and behave as people would, but they don’t appear as people would. The protagonist in this game, a character’s whose default name is Stranger, is a Minotaur/boanthrope, who deals with the other types of people, be they kind or nasty. 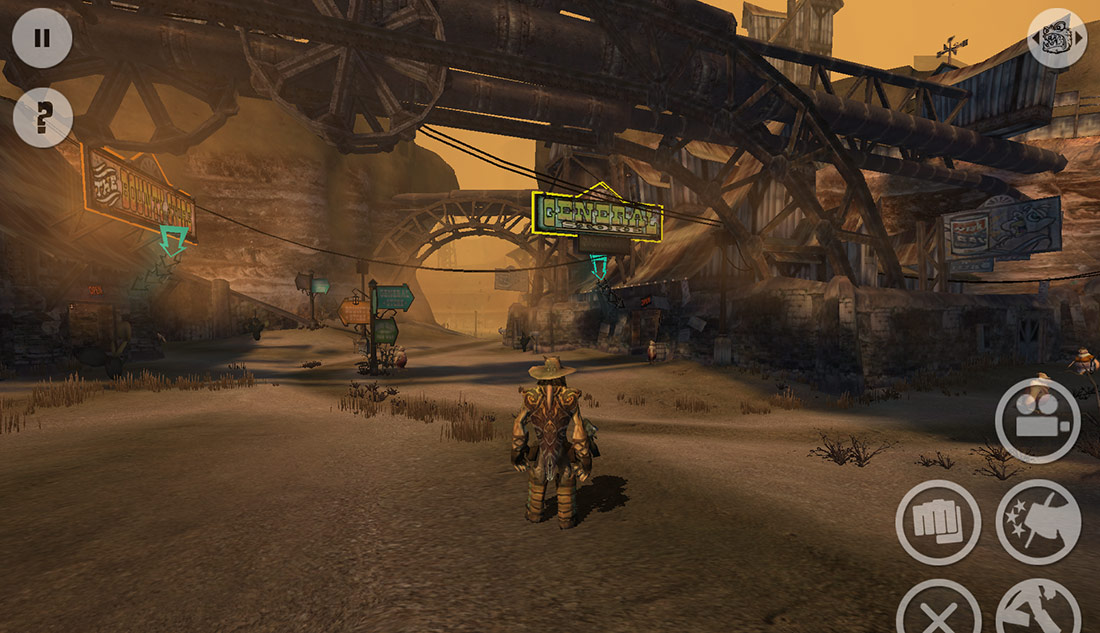 Another quirk in Stranger’s Wrath is the setting of this game. For much of it, it feels like the old west in many ways. The speech and dress of Stranger is from that era, as well as that of many of the people and buildings. Yet at other points in the game, it breaks from the old west and jumps to futuristic Sci-Fi. And while reading about it here may seem out of place, it all works together within the game. Stranger, in Stranger’s Wrath, is a bounty hunter by trade. In and of itself, that would be enough for most games, but there’s a back story here that drives the narrative. Stranger is looking for a very expensive surgery, so he can’t just go out and bag criminals to pay for it. Rather, there’s another type of creature that he can hunt that will pay him the desired sum of money; as the story develops, what Stranger is hunting and who’s paying out the bounty for it come in to play, and nicely at that. So, for much of the game, Stranger simply goes about his job and works towards finding his big payday.

He begins in a small town, where there are a handful of bounties that need collecting. Stranger will have the option to bring them in dead or alive, though achieving the latter is two or three times more profitable, yet more difficult at the same time. As Stranger collects in bounties, he’s paid as expected and can then invest his earnings in a handful of ways from the General Store located within each town. There, he can replenish existing ammo, acquire new types, and upgrade or augment other things. Sadly, once Stranger finishes collecting all the bounties and moves on to another town, what was for sale in a previously visited city isn’t acquirable in the new one, nor did I see a way back to previously completed towns, and reinforces the linear feel of the game, despite players choosing the order they want to catch bounties within a given town. When on a mission, Stranger leaves the town and goes off to catch the criminal, hopefully alive. 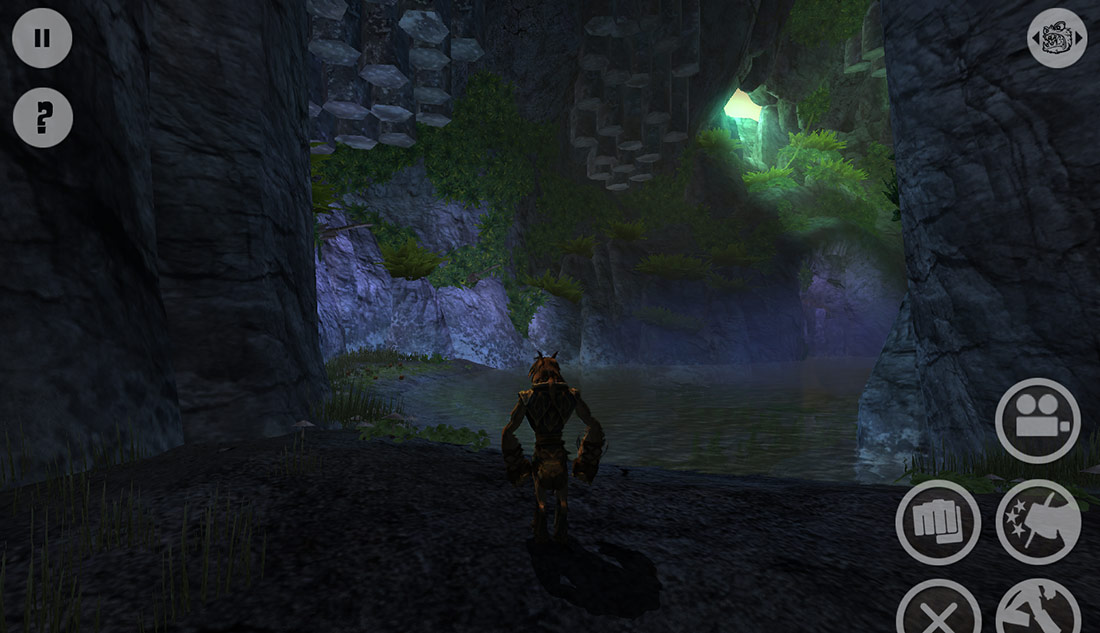 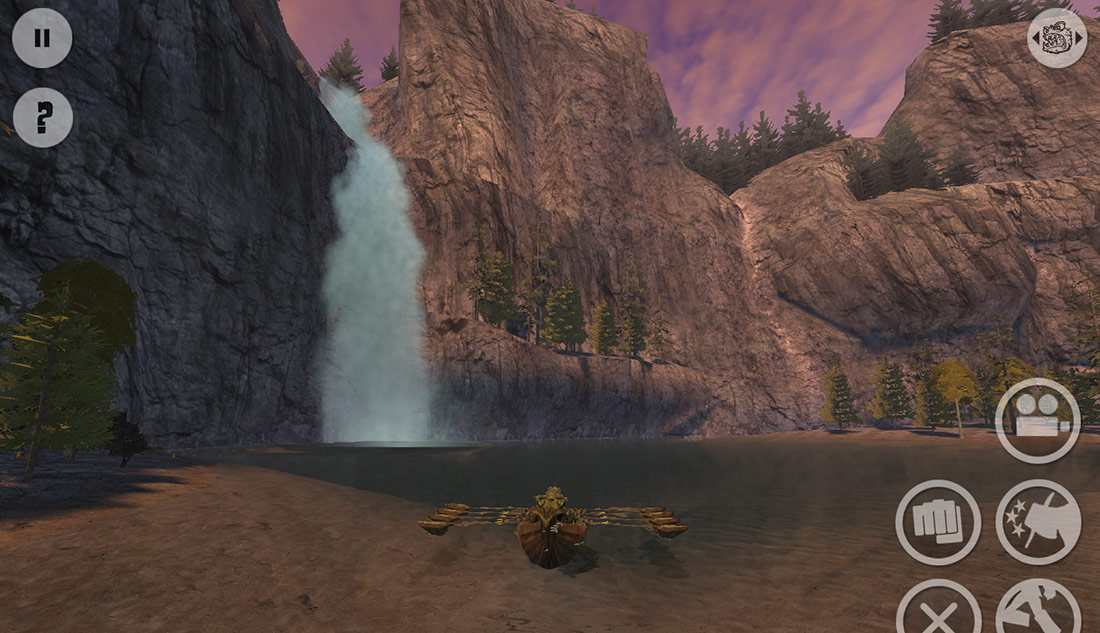 He has a couple of weapons at his disposal, but the primary one used is a wrist-mounted crossbow that can load two different types of ammunition at any given time. What’s interesting is that the ammunition used by Stranger is all alive; wasps, skunks, bats, et al. Each one is a diminutive critter that mimics the function of a traditional firearm. For example, the skunks mimic gas grenades, and firing one will release a localized cloud of gas when it lands, that incapacitates those nearby. Shooting spiders will wrap up criminals in a webbing that makes for easy collection. And at opportune times, Stranger is able to stock up on more his living ammunition by shooting at the critters in the wild; the ammo-critters frequently have nests outside of town where Stranger can shoot them with “zap flies” (think fire flies that carry an electrical charge) to stun them for collection and future use. This is definitely a nice twist on the conventional models for shooters today.

After cleaning up several towns, Stranger is forced to focus more on his surgery, and why he wants it, opening up a second (and quite distinct) portion of the game where bounty hunting no longer applies and things get more personal for him. All told, this game is a long one. The bounty hunting alone is the length of a complete game, but it extends well beyond that.

The gameplay works in a twofold fashion. Using the crossbow functions from a first person perspective, and most everything else is relegated to third person, including what little dialogue is in the game, travel, and even physical combat such as punching and headbutting. These are typically managed through several virtual buttons in the lower right hand corner, and this likely stems from it being initially released for a gaming system like the Xbox. 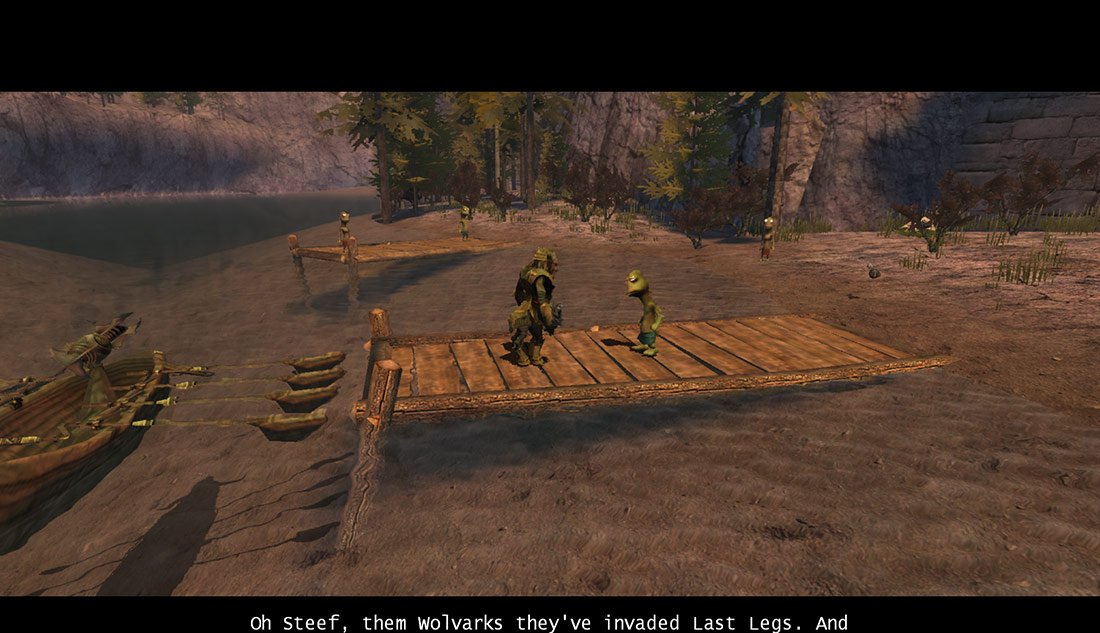 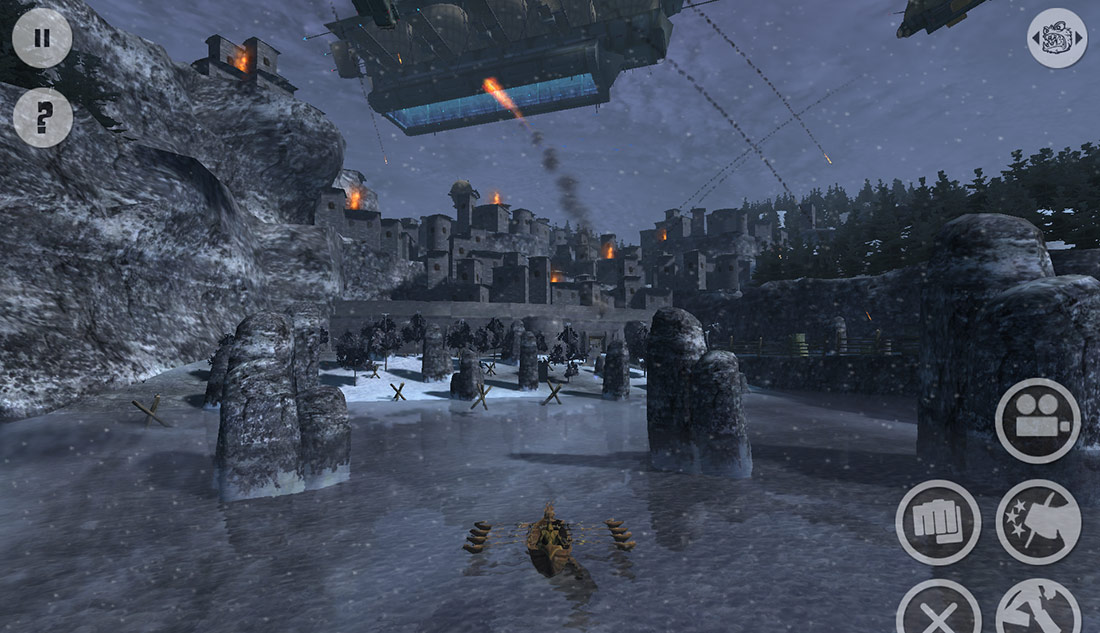 First, there’s a dedicated toggle for swapping between first and third person perspectives. In third person mode, players will also have buttons for punching, headbutting, jumping, and an X button for miscellanea (speech, activating switches, securing criminals, and the like). In first person mode, you retain the toggle while having two fire buttons (one for each of the two choices of ammo a player can load up and fire at any given time) in place of punch and headbutt, while retaining the jump and X buttons at the bottom. This is a game that thankfully supports controllers, as I am convinced it would have improved my experience (had I one). More than once I tapped on the wrong virtual button, in the middle of action, simply due to having five on the screen as opposed to the one or two that I’ve come to see as the norm in mobile gaming.

Setting that aside though, the swapping between first and third person perspectives also works. It allows players to see Stranger and his surroundings better, but at the same time allow a finer level of control during combat; part of this finer control stems from the option that allows players to use the gyro sensors in their handsets to control their first person aiming, in addition to swiping. I really found it handy to be able to make sweeping movements using the gestures, and then “zero in” by tilting or turning the device a little bit in one direction. The two styles complimented each other nicely. Stranger’s Wrath also has a radar system, color coded for friend and foe, as well as for how alert the enemy is and what direction they’re viewing in (a la Metal Gear). Enemies can see Stranger, and while Stranger can run into bushes to hide (if they’re available), enemies will still search in Stranger’s general area before breaking off pursuit… another nice touch. I did find that I could’ve used more than a simple radar system, and frankly could’ve used a mini-map at times, just to help myself navigate some of the later towns or larger areas where I was bounty hunting. 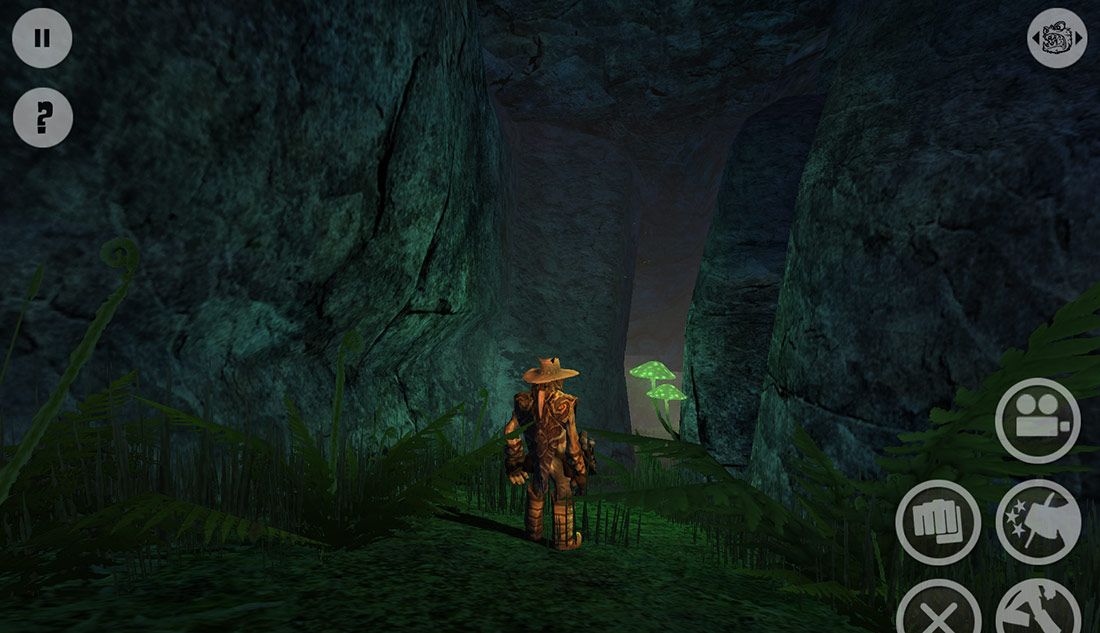 While being a far cry from open world, some of the towns and outdoor areas are a good size and I got myself turned around or lost on a couple of occasions. Catching crooks for bounties is a simple (but not always easy) process. Of the various options (critters to shoot, or fisticuffs), enemies and bosses alike will end up either briefly unconscious or killed, again with the former being a bit trickier. In either scenario, players will capture them in a Ghostbusters like fashion, sucking them into a contraption to then be exchanged for a bounty. Enemies will struggle and scramble in an attempt to get away from the vacuum-like contraption. This made sense for the criminals that were incapacitated, but struck me as more of a bug or an oversight when the crooks were dead and yet struggled to get away from being secured. At other points, the shadows of the characters would show up on the wrong side of floors/ceilings, or on the other sides of walls. Like the dead villains struggling, this is a small complaint, but it still took me out of the experience.

Lastly, the virtual buttons didn’t fade away (into immersive mode) any time I would open up the game. If I hopped out and back in, they’d disappear as one would expect. This is worth mentioning as having the nav bar at the bottom would cover the virtual buttons and preclude me from taking advantage of them fully by cropping off a portion of them, so long as the bar was showing. To be clear, the bar is transparent, so the visibility of the game’s virtual buttons isn’t compromised, it’s just that the lower portion of the bottom two was compromised. I have emailed these issues to the developers, so hopefully they’ll be fixed in short order. 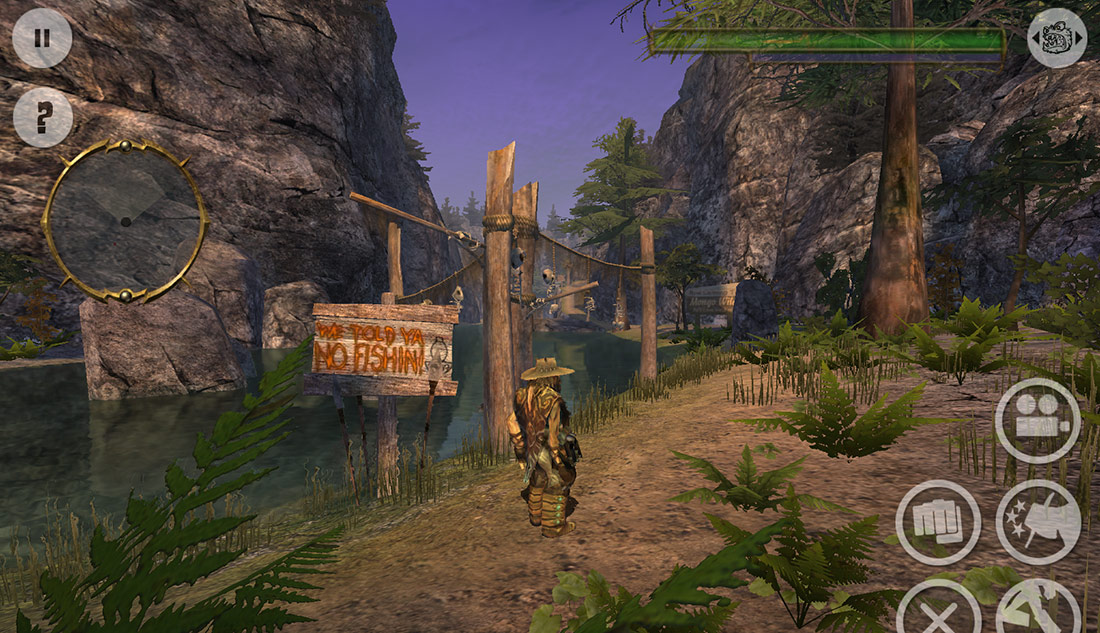 There are three different meters that are at the top of the screen and pertain to Stranger. First, he has a green life meter. This can be replenished by shaking your device, and watching him beat his chest to knock out all the projectiles he was shot with. How often you can do this is determined by the second meter for stamina, colored in blue. It will recharge on it’s own, gets a small boost when a criminal is captured, and is depleted when used for regaining health. Much like twisting and turning the device to fine tune my aiming, I found this to be a humorous and clever way to integrate mobile technology into a port of an existing title that was designed for a wholly different platform.

As the game progresses, Stranger’s armor, punching, stamina, can be upgraded, along with the critter-ammo. None of these achieve the level of RPG mind you, but they’re nice touches nonetheless. The soundtrack for the game varied at different points, but much like the score of a movie, used similar instruments and was fitting for the both the overall style of the game, as well as what was happening in that particular moment of the game. 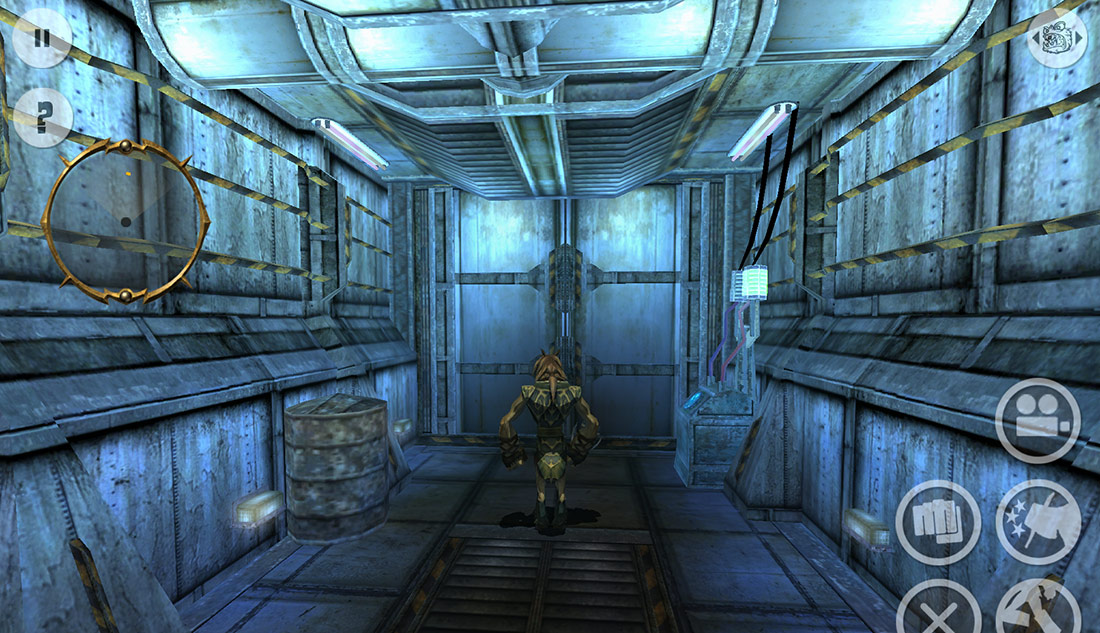 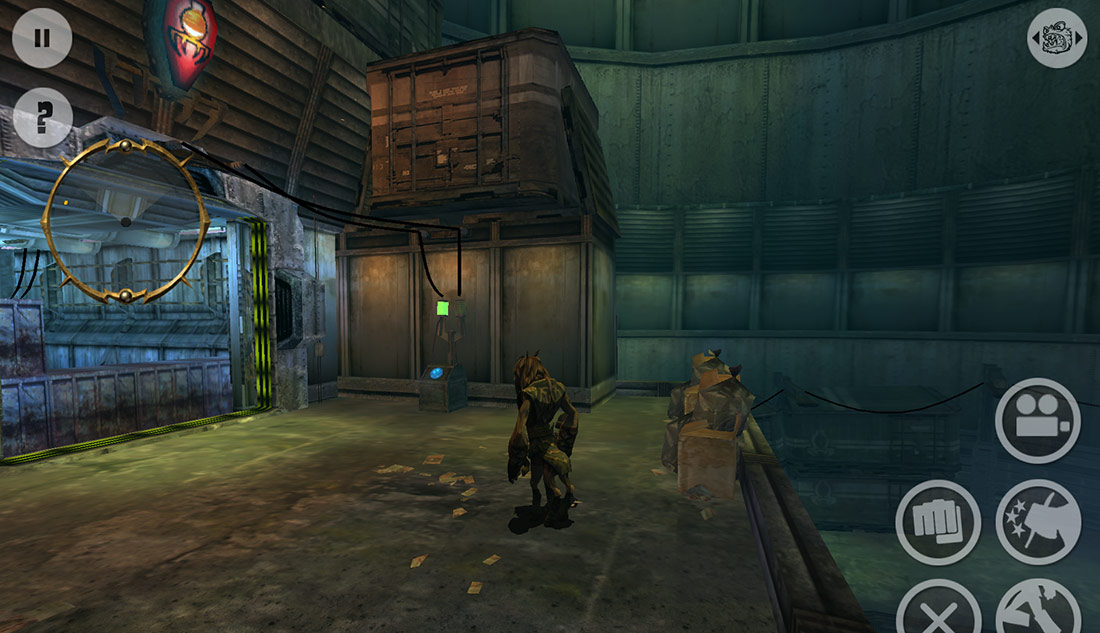 On the whole, the soundtrack was solid and I had no complaints there. I couldn’t find any limit to the save files, so players can start, save, and load any number of game files they’d like. The game also includes an option for players to upload their save files to their Google Drive account. I really hope to see more developers do this, as it strikes me as brilliant, as well as something that should have already been standardized. The graphics looked sharp on my Nvidia Shield Tablet, but the game did include sliders for how far players can try to push the graphics on their respective handsets. Lastly, the game is integrated with Google Play Games.

On the whole, there’s a LOT to like about Oddworld: Stranger’s Wrath. It’s long, the story was good, the graphics looked great, the mobile-friendly touches to aim and health regeneration are all reasons to like this game and if you have a controller, even better. Despite the one or two small bugs I noticed, I can easily recommend this game to anyone that likes action games, shooters, a decent story, or really wants something they can sink their teeth into that won’t be completed in two or three hours. Given it’s current sale price of $2.99 (and no IAPs), it’s a bargain.