Double Dragon is a classic arcade and go!e console game from the late 1980s, and into the 1990s. It was a great game and franchise in its time, popularizing the venerated Beat ‘Em Up genre. The success of franchise spawned several releases over different platforms. The original arcade game, and its first two arcade sequels was ported over to Android, and released by DotEmu, as a single collection. As such, this review will cover this trilogy.

The stories for all three are simple and very minimalistic: brothers Billy and Jimmy Lee are the Double Dragons, off to rescue a damsel in distress, during the first two games; the villains are the same in all three games, namely the Black Warriors gang. Oddly enough, Double Dragon II functions as much like a reboot as it does a sequel. The story and layouts of the levels are identical, in an up-scaled fashion. The story, and characters are the same, again just looking better than before. There isn’t much more to the story than what I’ve mentioned here. For this style of game, it’s really just an excuse to go around and beat up bad guys. 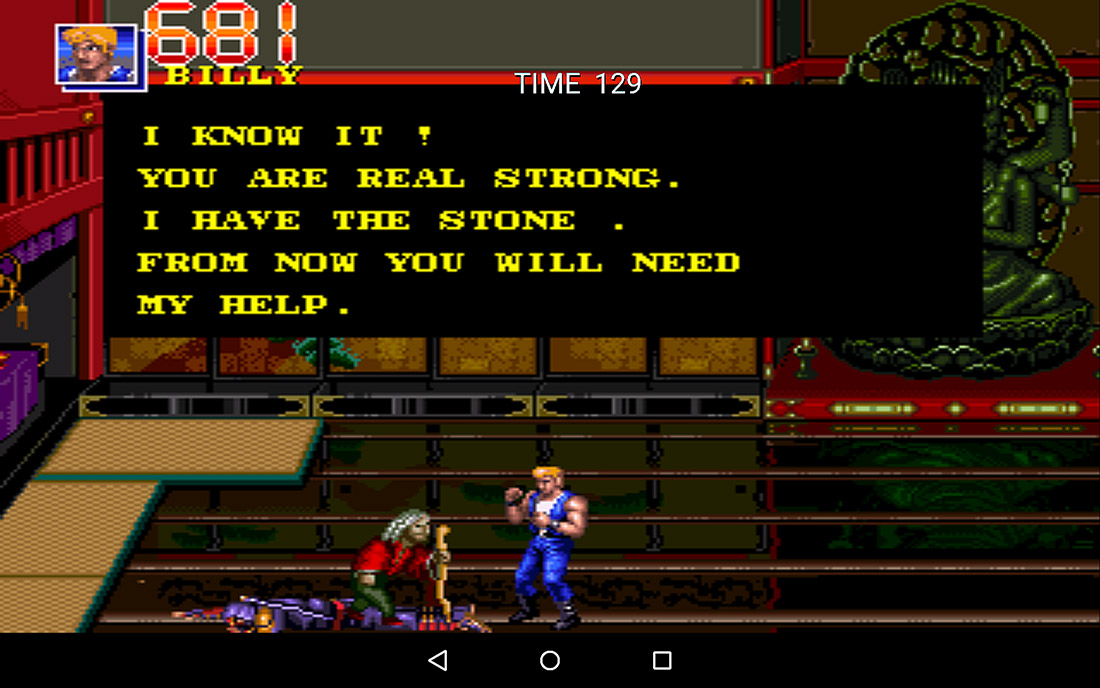 There are no voiceovers, or narratives to advance a story of any kind (save for a few instances in Double Dragon 3), players simply progress through a given level, beating the living snot out of anyone crossing your path… and that’s more than OK. What passes for a story in the first two is deviated from in Double Dragon 3, where players are seeking the famous Rosetta Stones, where possessing them is a prerequisite in order to challenge the world’s strongest adversary. All three games were first released in the arcade, and later ported over to other systems.

The gameplay of the Double Dragons is fairly straightforward. For each of the games, there is a virtual joystick set in the lower left, and buttons on the right hand side. There are only three buttons for each of the games: punch, kick, and jump. What’s nice about this game, just like others that DotEmu have ported over to Android, is that the buttons can be both moved about the screen, as well as adjusting their size and opacity, however the player sees fit. So, I could make them small and highly visible, or large and completely transparent. Despite having only two offensive buttons at a player’s disposal, there are a variety of ways to inflict pain on the enemies that appear on screen. First, there are different combos that players can execute, whether it’s grabbing an opponent by the hair to knee his or her face in, to jump kicking, to flinging them over your shoulder, jabbing with elbows, headbutts, and so on, all using the the default buttons. 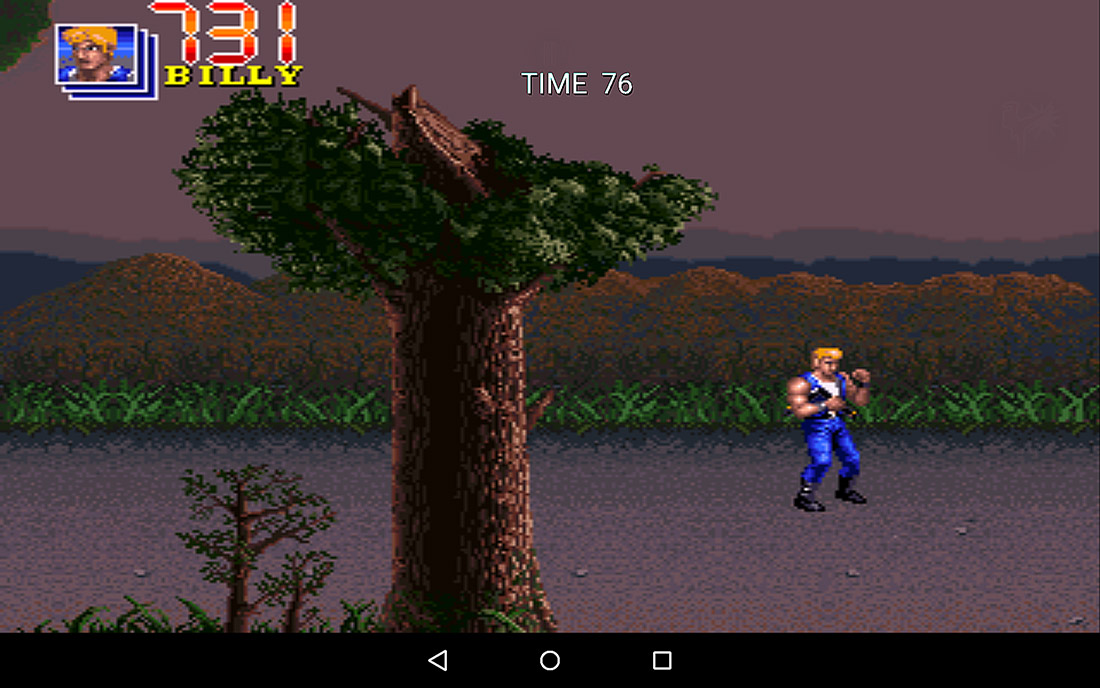 Second, many of the enemies will come with melee weapons in hand, or find makeshift ones lying about, and I enjoyed picking them up once the opponent was disarmed, and turning the weapons on my opponents. These weapons would range from a metal baseball bat, to throwing knives, to whips. to oil drums lying about. It wasn’t uncommon for me to see several of them on the screen at any given time, which was a far cry from the limit of two that I recalled from my days of playing it on the NES at home (which I recently found out was due to the studio’s unfamiliarity with the hardware and its constraints when it was ported…but I digress). Beyond the danger of these characters attempting to inflict pain on me, the levels themselves occasionally contained pitfalls as well, such as cliffs or holes that one could fall off of, or into; fortunately, the threat was there for everyone, and knocking or throwing enemies off an edge is as easy way to dispose of them as it was for me to be disposed of.

In the final level of each game, the temple/hideout always contained things like statues reaching out to stab at me from along the wall, floor spikes, and other dangers. Overall, levels are almost exclusively progressed through by moving towards the right and away from the left, with the camera perspective at the traditional 45 degree angle, to allow some depth in movement, beyond strictly lateral movement. Once I reached the end of a level, I needed to defeat that level’s boss before I could progress to the next level. No surprise, just classic gameplay here. The first two Double Dragons contained four levels each, and the third game contained five. All of these games retain the original graphics from the arcade games, as well as both the original soundtracks as well as a remix, with this option being a toggle found within a given DD’s in-game settings screen. So, heavily pixelated graphics and chiptunes abound here, and it works on this classic game. 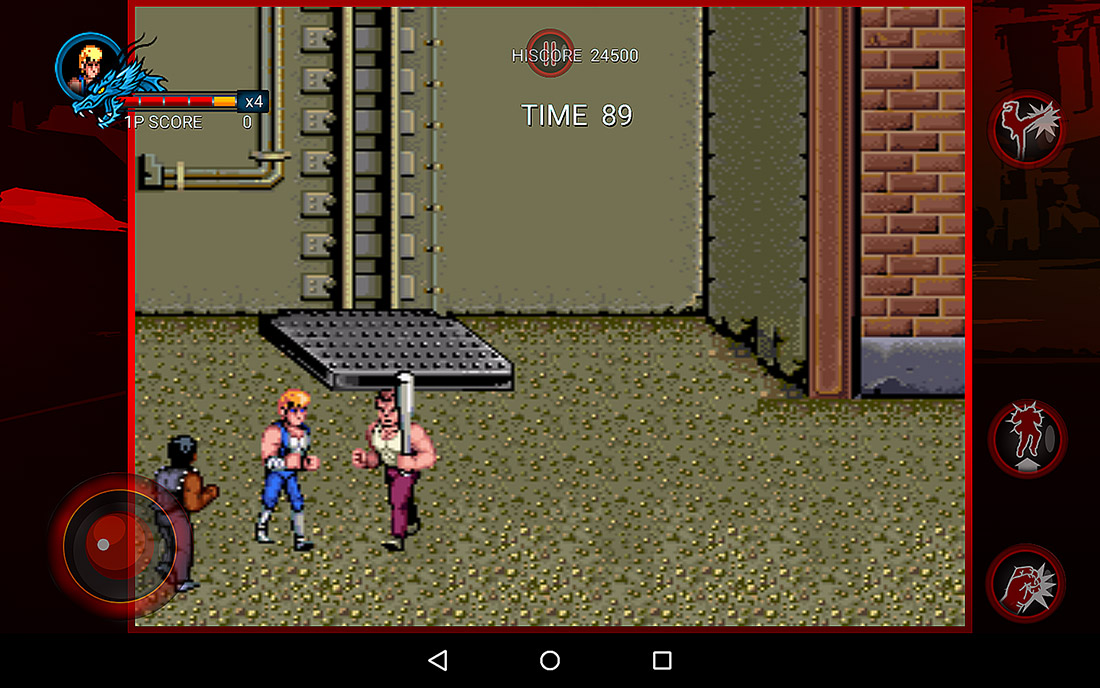 Double Dragon Trilogy has no conventional save system like most other games have, and given that it’s an arcade port, that would stand to reason. There are two modes of play in the trilogy, Arcade and Story. With the former, you always start from the beginning, with your health and lives maxed out. The idea is to see how far into the game one can go, until all of the Continues have been used up. Story mode allows players to select which level they would like to begin on, provided that the desired starting level was reached through gameplay at a prior time. While this does enable players to start the game closer to the end, there are no additional continues given to players in this mode, so once I was out of lives, that ended Story mode for me. Fortunately, players can progress to subsequent levels in Story mode just the same as Arcade mode, so if I started a game in Story mode on level two, I could load Story mode at a later point to start at level 3 or 4, if I’d gotten that far in Story or Arcade mode before.

The game has other options in the settings, such as excellent support for controllers, providing controller support for Xperia and Moga, as well as the touch controls. Having played the game using both touch and a controller, the latter is definitely preferred in light of the amount of button mashing the game required. Given that many people who would play this game don’t have a controller, DotEmu has included a “mobile” level of difficulty, that is intended to offset the awkwardness of using virtual controls. As far as I can tell, they just drastically lower the hitpoints for your enemies. In playing through the first Double Dragon, as an example, I noticed that just about every enemy died, after the first time they were knocked down, instead of seeing them get back up two or three times after being knocked down; the difference was palpable, and did change the experience for me on touch controls, allowing me to go significantly deeper into games than had I opted for the original difficulty. 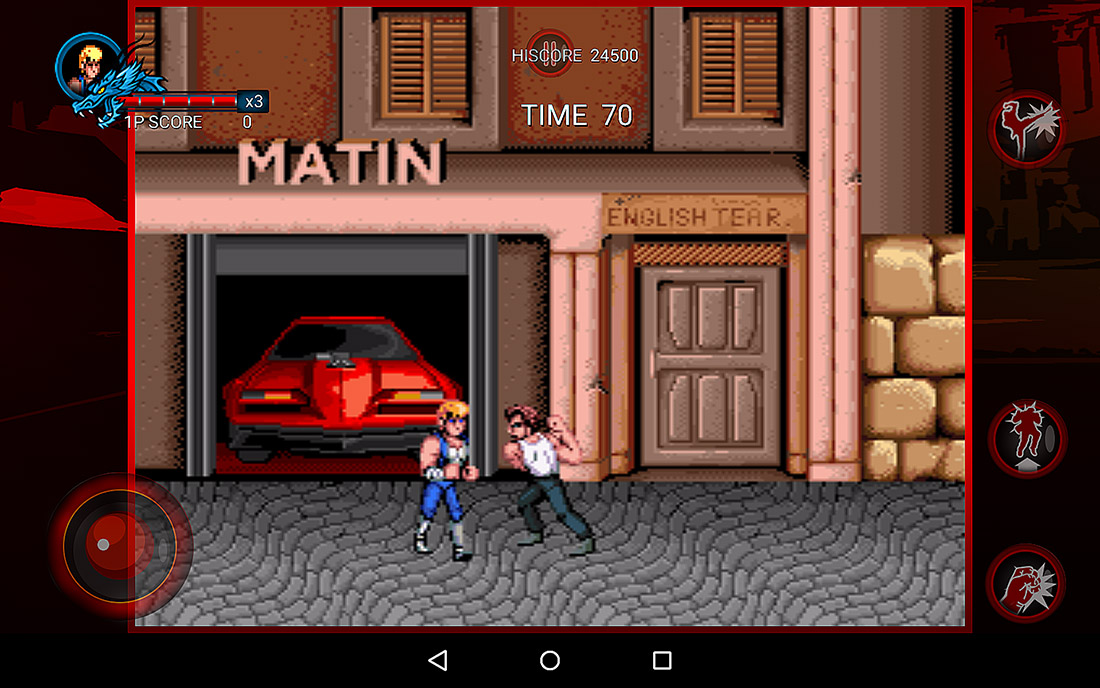 Other tweaks added to this port, that players can control, are things like the aspect ratio (4:3, full screen, etc), as well as toggling scan lines and video filtering. There’s also a third difficulty level for the trilogy, called “expert”. These options that are added in by DotEmu, in addition to the aforementioned customizable virtual controls, really make this great, as ports go. It’s an element of player control that I don’t always see in ports to Android, and feel that it’s worth praising here. The people at DotEmu understand that they’re porting it, and seem to add those touches to compensate for the game being played on hardware that wasn’t envisioned at the time of the games inception. The game also includes local multiplayer, provided both players have Bluetooth controllers. There is also Google Play Games integration.

Lastly, there is a flaw that needs mentioning. In Double Dragon 3’s arcade release, the developers added some options that were new to the franchise. Players could visit a shop that was found on a given level, and could then purchase upgrades from an assortment of power ups (extra lives, upgraded damage, a weapon, etc), purchased by putting change into the arcade machine. For reasons I’m unaware of, this feature was included in the Android version while omitting any visual indication of “coins” available to the player. Some amount of virtual coins was definitely there, as I was able to equip my character with extra lives and a set of chucks to attack with, yet I have no idea if there were extra coins made available to me later in the game or not. In an otherwise stellar port that seems well though through on things like controls, visuals, soundtrack, and more, not addressing this strikes me as odd, and was quite jarring to me while playing it. Fortunately, I found no such issue in either of the first two Double Dragon games.

With that being said, I can give this game a qualified recommendation to gamers that will really appreciate a classic Beat ‘Em Up, despite this snag. Given that the game is really a trilogy of games, the $2.99 asking price isn’t bad, save for the flaw in purchasing power-ups in Double Dragon 3. Were it not for that, the recommendation would be unequivocal to everyone.