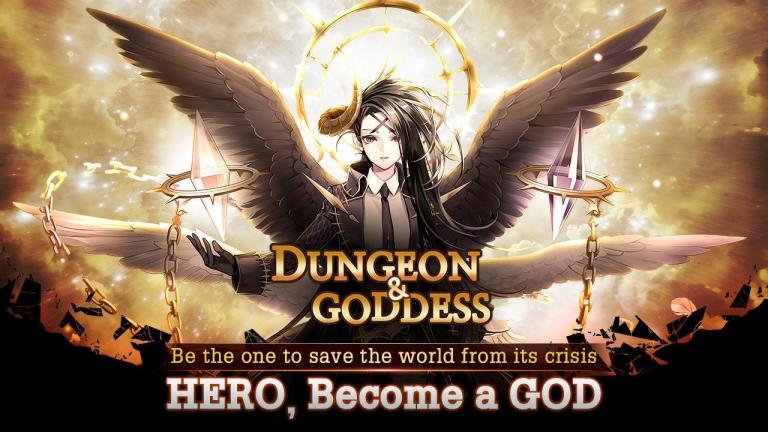 Dungeon & Goddess sees you striving to become a god while battling against fallen angels. Talk about a high stakes premise.

Developed by Korean Studio NadiaSoft, the game involves collecting heroes, levelling them up, and sorting them into decks for single-player and multiplayer battles. Your mission: to save the world.

You accomplish this through classic 2D battles, against a menagerie of monsters and an even bigger and more wonderful menagerie of human opponents. Dressed as monsters.

Monsters and other fantasy creatures are the footsoldiers, but your chief antagonists are a group of fallen angels – powerful characters with enormous wings and an equally enormous appetite for chaos and destruction.

There are 150 heroes in Dungeon & Goddess, all of them belonging to one of six different types, and associated with one of five different elemental affinities, such as Fire, Wind, and so on. All of them can be enhanced, too, giving you near-infinite scope for variety in your fighting force.

But however many heroes you collect, you can only field a certain number in your deck. That’s where the strategic stuff comes into play. To overcome a powerful opponent, you’ll need to pick the right heroes and assemble your deck in the right way.

That means not only picking your most powerful heroes, but ensuring their elemental affinities will counter the affinities of your opponent.

Along with the PVP battles there’s a dungeon system, boss raids, an infinite tower, and daily dungeons. Between them these modes provide a wealth of opportunities to increase your, erm, wealth, as well as your player level.

On top of all that, Dungeon & Goddess looks great. Just watch the trailer. The anime-inflected designs are ultra-stylish, and the graphics are rich and detailed.

Dungeon & Goddess is free to download, with gacha in-app purchases. Download it for free right now on Google Play.