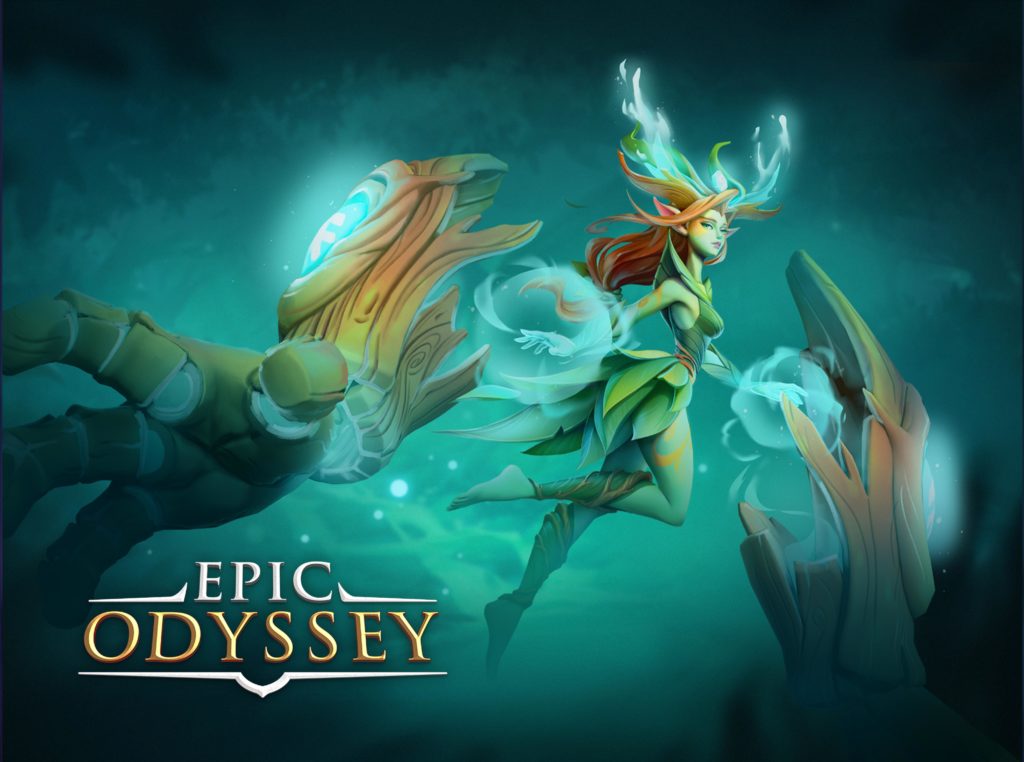 Epic Odyssey is at the more accessible end of the gacha-RPG spectrum, with a greater emphasis on story than most and less of an emphasis on deep combat.

As you work your way through the campaign you’ll frequently encounter enemies that you can’t yet beat, because you haven’t levelled up your heroes enough (or because you’ve got the wrong formation – more on that later).

On these occasions you need to visit the game’s other areas. These include:

The Great Hall: A constantly replenishing AFK source of goodies.

The Trader: A storefront where you can use Gems or Gold to buy powerful items.

The Tower: A  tower made up of several floors that you ascend for greater and greater rewards, beating bosses along the way.

The Demon Queen’s Palace: A series of battles, like the tower, but against teams.

The Worlds Portal: Another series of battles, with heroes from another player’s inventory to help you out. Takes place across the whole Lynea Continent.

The usual Daily Quests, Weekly Quests, Achievements, and so on.

After levelling up and equipping the right equipment, good strategy is the key to winning battles in Epic Odyssey. That means choosing the best heroes and putting them in the right part of your formation (tanks at the front, ranged attackers at the back, etc).

On top of that, they come in three different classes: Warrior, Assassin, and Mage. That means you’ve got nine possible combinations to manage, since all three factions come in all three classes.

Note that you’ll get a special buff for using three heroes from the same faction and class in your party.

You can learn all about the heroes in your collection at the Library, which you can find in the Temple.

Heroes come into your possession in two different ways. Either you acquire them through the story campaign, as they join in the struggle, or you summon them. To summon a hero you need to unlock the Sanctuary and then head to the Summoning Gate.

The heroes you summon can have any starting rank. Rare and Epic are the ones to pray for. Common heroes can be upgraded as far as level 40, but it’s best to just recycle them at the Temple and cash in the gems and resources.

To upgrade heroes, you need Gold and Spirit Points, and Runestones at specific levels. As you level-up your heroes they’ll gain new skills. A hero’s level limit is determined by their rank. To increase a hero’s rank you can ascend them at the Temple by sacrificing other heroes.

As you play you’ll obtain gear, either as loot or through trade. It’s important to ensure that you equip the best items of gear you have. Fortunately, this is an easy process – just head to the Heroes tab, tap on the hero in question, and tap ‘Auto Equip’ if there’s a notification. The Heroes tab is also where you go to level up your heroes.

It’s also important to make use of the Pentagram feature. This allows you to form a top team of your best five heroes and then assign followers from the rest of your collection. The followers you assign will assume the same level as the lowest level hero in your top team, giving you more halfway decent heroes to choose from when building a squad.

This level boost is tied to the Pentagram, so if you discover a new favorite you’ll need to upgrade them the old fashioned way to get them properly up to speed, but it’s a great hero discovery tool.

Each hero can take on up to four pieces of equipment, including weapon, armor, helmet, and accessory. Like heroes, equipment items are sorted into ranks: Common, Rare, Epic, and Legend. They increase a hero’s Health, Attack, and Defend stats.

In addition, equipment items each have a Special Stat, which increases a hero’s combat or total basic stats by a certain percentage. Special Stats are divided into Common, Rare, etc.

The final word in the name of a Special Stat reveals its function. For instance, the Snipe Bow of Sylph increases a hero’s evasion. Here are all the relevant signifiers:

Equipment comes to you through numerous routes, including chests, quests, NPC missions, and so on. Also, you can buy equipment from Dwarven Trader Lacose. Whose stock is refreshed every day. You can buy equipment with Gold, Gems, PvP Points, and Clan Points.

Once an item of equipment is in your inventory, you can upgrade it by tapping ‘Enhance’ or ‘Refine’ in the item’s inventory page. You can only enhance an item to the level of the hero using it. Refining equipment lets you increase its star rating. This costs Gold and lower rank equipment.

Android Gaming Headlines and Updates: PUBG Mobile, Among Us, Xbox Beta, and More