1DER Entertainment delivers Tiny Archers to Google Play and it is perfectly on target.

1DER Entertainment has recently released Tiny Archers. If you have ever played Castlestorm, then you will more than likely enjoy this castle defense game. Tiny Archers has three main characters that you will have an opportunity to play, as tolls and goblins come to destroy your castle. It is a good thing you have your bow and arrows, because you are going to need them. Tiny Archers is a fun game with a few twists up its sleeve. It is free-to-play, but that doesn’t hurt the game at all.

Castle defense games have been around a while. I tend to enjoy them. Castlestorm, which was made by Zen Studios is one of my favorites. In case you didn’t know, Castlestorm VR is available now too, if you like VR games. Okay, back to Tiny Archers now. Tiny Archers surprised me with a few small details that show off the game’s brilliance. As with similar games, you are in a tower as different enemies approach your tower. The goal is to take out the enemies before they take over your castle. The game starts off slowly, which is appreciated. You already have the feeling that before too long, you are going to be overwhelmed with hordes of enemies. 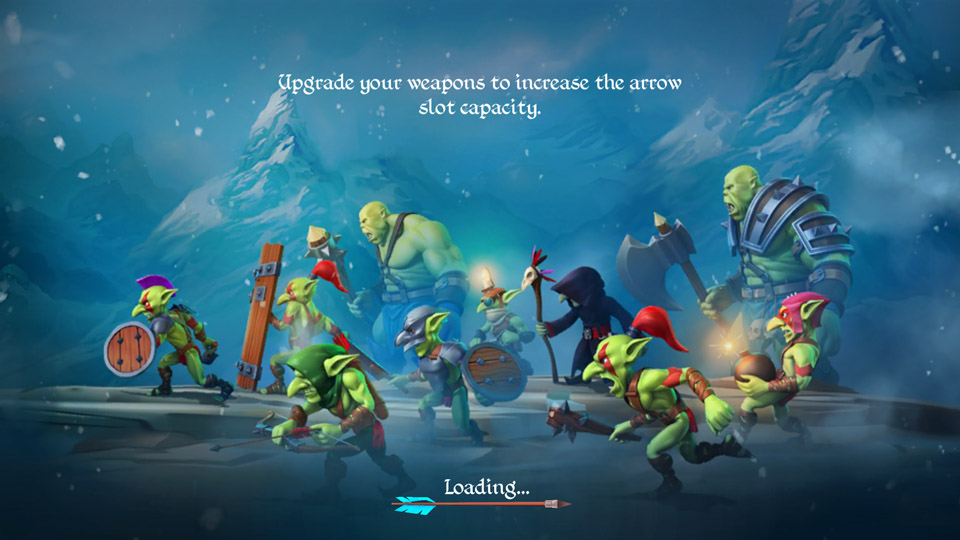 The primary game mechanic is aiming your shot, akin to Angry Birds. However, depending on the enemy, your strategy may change. Some enemies have heavy armor and plod a bit more slowly, and others move quickly and need to be stalled before you are able to completely remove them from the field of battle. You have bows, arrows and special power-ups that can be used during the game to help you in battle, like a ballista, hot oil or freezing arrows. As you progress farther in the game, more is available to you to help you take out the enemies.

“War is coming! Draw your bow and save your kingdom from hordes of goblins and trolls that siege your tower! Crush your enemies and become the greatest Tiny Archer in this new challenging, fantasy, action game.” – 1DER Entertainment

One of the things I appreciate about Tiny Archers is the attention to detail in the game design. The goblins and trolls come in different lanes. In what is a simple game design choice, but one that I think is impressive, is that the perspective slightly changes as an attacker approaches. The screen tilts back and forth to let you know when a new attacker approaches. This also shows up in the menu screen. As you are holding your device, if you move it up or down, or left and right the screen moves just a bit. Again, it is simple, but it is a nice touch. As the enemies begin to move more quickly and the perspective switches back in forth, you can imagine your Tiny Archer moving his/her head to take stock of things and decide what enemy to take out next. 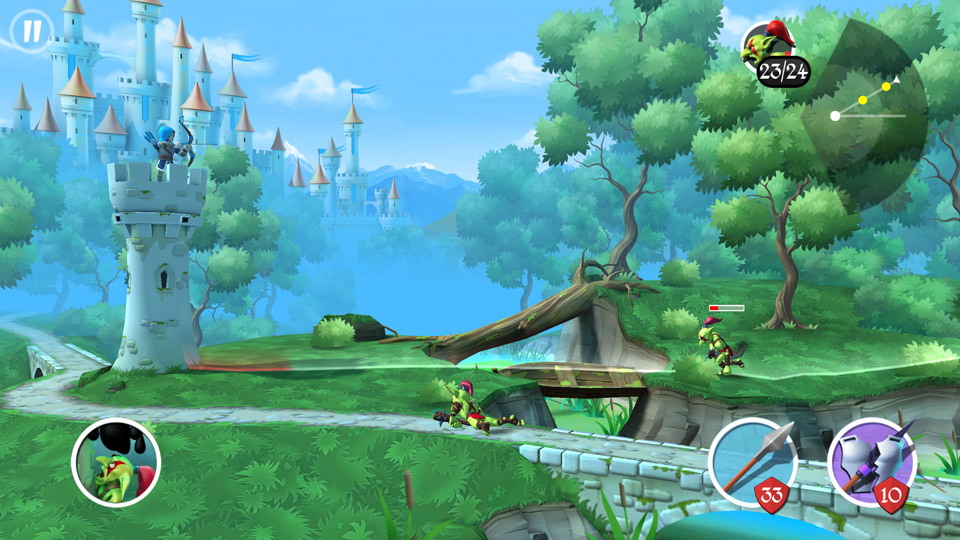 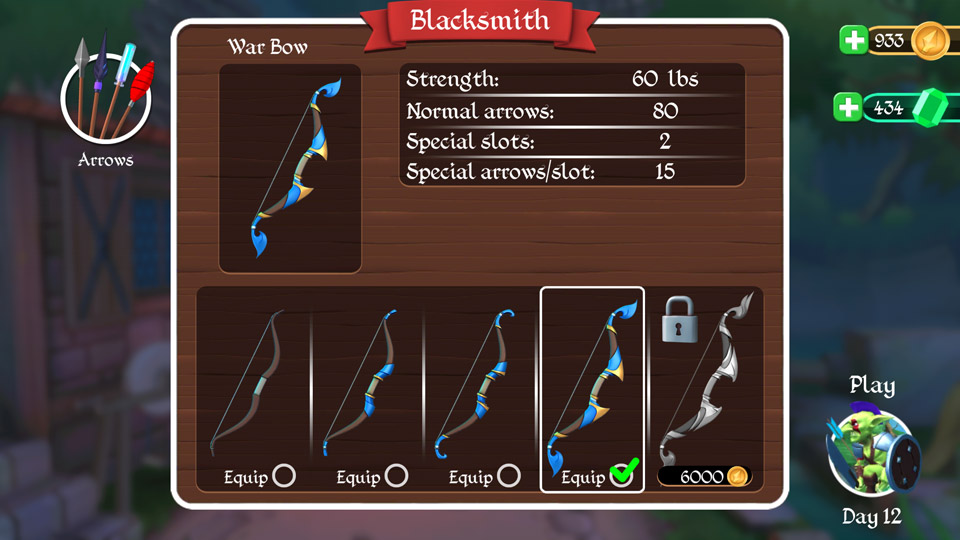 The game allows you to play as three different characters. After you have finished the first quest with the Tiny Archer Adam, you move on to Lily and Narin. Each archer’s quest is broken up into days. Adam’s quest is twenty-four days or twenty-four levels. There is quite a bit to play in this game. There is also a blacksmith who helps you with your armor. The upgrading is done by spending coins and gems. You acquire gold pretty easily and gems too. Completing missions and achievements will net you a fair amount of gems. Gems are refilled over time too, but since this is a free-to-play title, you can pay real money for gems and coins. The gameplay and monetization structure feels balanced, which is a good thing. Even during battle, if you are running out of arrows, you have the option to watch an ad, to immediately fill your quiver. This was helpful during some pretty difficult levels. 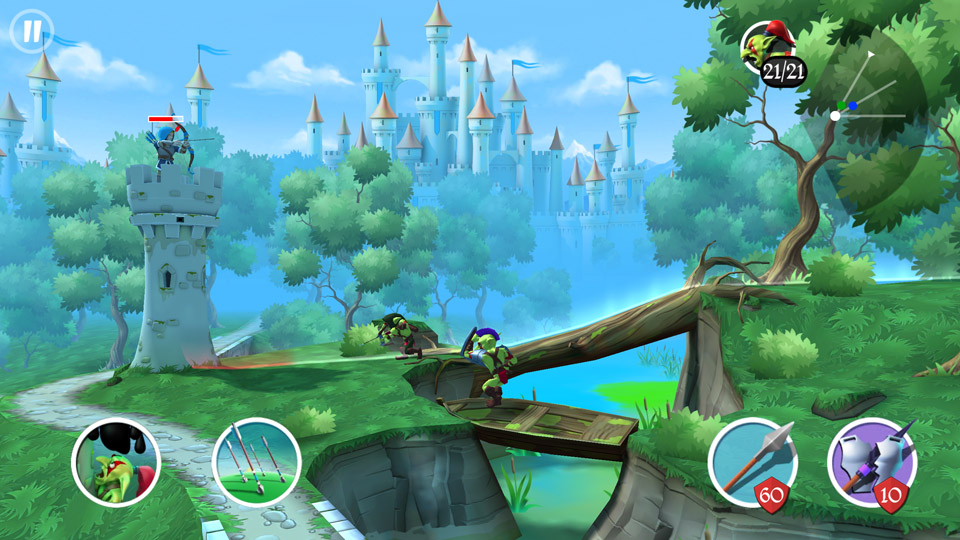 Tiny Archers is a great game to play and it is a lot of fun too. The artwork is mesmerizing, the music fits the time period of the game, and the game has plenty of variety and missions and in-game achievements. This is a game that shouldn’t be missed. 1DER Entertainment also brought us the great game SirVival not too long ago. If you enjoyed the gameplay in that game, you will enjoy this one as well. 1DER Entertainment has hit the bullseye with this game. Don’t hesitate to add it to your library.