If you’re a fan of gamebook series such as Fighting Fantasy (the actual physical books) or Tin Man Games’ Gamebook Advenutre series, then the news we reported on not too long ago about a bunch of the first Fighting Fantasy books being brought over to Android was very good news to read. With a couple of them released already, Tin Man Games and Fighting Fantasy are back with another release, this time taking the form of Temple of the Spider God.

The previous two releases featured collaboration with two of the Fighting Fantasy legendary writers, and gamebooks in general, Ian Livingstone and Steven Jackson. Temple of the Spider God brings another Fighting Fantasy veteran to Android, Jonathan Green, who has worked on numerous major projects outside of Fighting Fantasy including gamebooks and novels based off of Star Wars Clone Wars, Doctor Who and Warhammer 40K.

For those of you not familiar with either these digital gamebooks or the real thing, these are basically RPG titles but in a book format. Sort of like taking a table top game like Dungeons & Dragons and putting it into a format where only one person plays it which is done by reading the book itself. As you read through the book you will be presented with choices that you need to make. Based on your choice you will flip to the corresponding page and deal with the result of your choices whether it be good or bad. 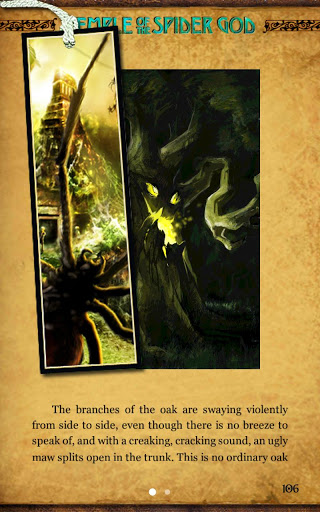 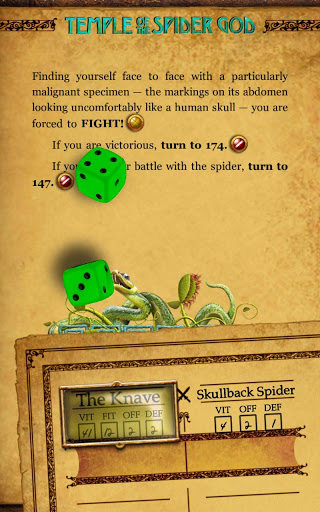 Tin Man Games makes original digital gamebooks that expands on this concept by offering more interactive features such as a character sheet with stats and the ability to roll 3D dice. With these remakes of the Fighting Fantasy series, Tin Man Games and whatever author they are partnering up with at the time also add new exclusive art and sometimes even new exclusive content not found in the original books.

If you’re a fan of the Fighting Fantasy series of books, or just a fan of gamebooks in general, you now have a new one to sink your time into. Temple of the Spider God is available for purchase off of Google Play for $5.99.