Maybe the title is a bit extreme but we are definitely taking a step towards a hit in productivity soon as GameString has officially closed the registration for Closed Beta sign-ups and will begin testing soon. If you don’t remember who GameString is, let me refresh your memory by saying this: World of Warcraft on your Android device.

GameString is a cloud gaming service (GaaS) who last year made some pretty big headlines in the mobile and gaming world with their preview video of their upcoming Adrenaline service by showcasing World of Warcraft on an Android phone. Back then it was still in the Alpha stages of development but that was then and this is now. After a fair amount of time developing Adrenaline, you can bet that the user interface has come a long way when translating keyboard controls to touch screen and other features that would need to be optimized for mobile devices.

Adrenaline is GameString’s cloud gaming service which will allow you to stream any of your games to any of your internet devices whether it’s your desktop/laptop, Google TV or Android device. Interestingly enough, some of the new promo photos also show the Xperia Play which means it will have support for those controls as well. GameString isn’t the only company to be working on cloud gaming. OnLive is going mobile which we saw at E3 this year with OnLive’s Universal Remote and service being run on the Motorola Xoom.

Some other things you’ll be able to do with the service include: 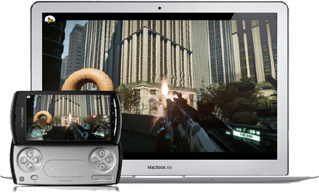 Between companies jumping onto the mobile gaming scene with cloud gaming services or Digital game sales such as Steam, it is only a matter of time before cloud gaming for mobile devices is perfected and we will be able to buy games off Steam and play them anywhere or perhaps that PC-based MMORPG you love so much but on your Android tablet. If you are curious about getting into the beta, you can sign up now for the public beta which is supposed to start Sept. 30th, 2011 if all goes well. For more detail on the actual service and the technical aspects of things, check out our previous article about GameString’s Adrenaline service.