While two out of the three phones announced by Sony are definitely not lower-end devices, the third one, being the Xperia J may end up being the more affordable phone from the bunch. The Xperia T will be the flagship device for the new line, sporting a 4.6″ screen with HD resolution, a 13MP camera, LTE/4G compatibility and NFC features. Underneath all of that will be a 1.5GHz dual-core Qualcomm MSM8260A Snapdragon S4 CPU, Android 4.0.4 (soon to be with Android 4.1 Jelly Bean), and will be available in Black, Silver and White.

The Xperia V phone is not a whole lot different than the Xperia T as it will have the same processor powering it but a smaller 4.3″ screen. It will also come with the massive 13MP camera and Android 4.0.4 which will be upgraded to Android 4.1 Jelly Bean. You will also have LTE/4G compatibility and the most unique feature for the Xperia V, the phone will come with a water-proof skin. This phone will be available in Black, Pink and White when it launches. 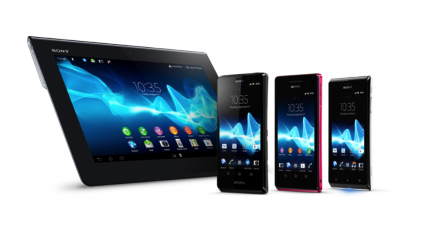 Lastly, the Xperia J will be powered by a 1GHz single-core CPU and will allow you to take pictures with a 5MP camera instead of the massive 13MP camera both the Xperia T and Xperia V come with. The screen is smaller as well, measuring in at 4″. No word on what version of Android this one will run but we do know it will be available in Black, Gold, Pink and White when it hits store shelves.

The Xperia T will be the first from the new line to arrive for people to buy with a global launch happening in the next few weeks. The Xperia V is slated for release in Q4 2012 as is the Xperia J. Unfortunately no word on pricing for any of these devices just yet. All will be Playstation Certified.