In the world on upcoming Android gaming controllers and consoles there is plenty of options to choose from when you’re considering buying into one. We have OUYA, GameStick, MOGA, SteelSeries and more when it comes to controllers and consoles. One company we’ve talked about in the past, called Green Throttle, is officially launching their product today which basically turns your Android tablet into a console.

We had a quick hands-on with Green Throttle during CES 2013 and while the software at the time was still in beta form, the controllers were actually finished and felt really good to play games with. Granted they are a bit unusual in how they look, especially with the D-Pad, but performance-wise the Green Throttle controller was quite good.

For those of you not familiar with Green Throttle, this company has developed software that will essentially turn your Android tablet into a game console where you can play games on your TV via HDMI-out. While that itself isn’t anything new, what the software does do in terms of making a more console-like gaming experience is add features such as multiplayer gaming with two controllers using only one tablet and split-screen gameplay, just like you would have when two people are playing a game on something like the Xbox 360. 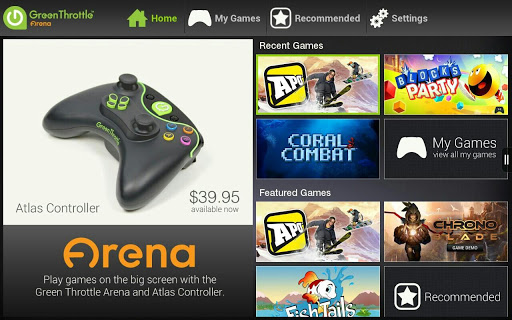 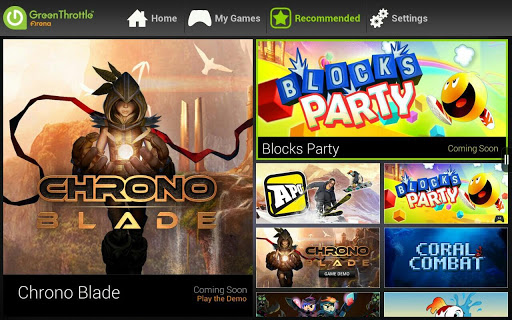 Expect a full review of Green Throttle to arrive in the  near future. Please Note: Green Throttle is currently available only for the Kindle Fie HD tablets. Support for other Android tablets will be arriving in the very near future.

SANTA CLARA, Calif., March 5, 2013 — Green Throttle™ Games, creator of the Atlas wireless game controller, developer of the Arena app and publisher of mobile games, announced today consumer availability of the Atlas Controller and Green Throttle Arena app (Kindle Fire HD Edition), with support for other Android devices coming soon. Together, the Arena app and Atlas controller turn a Kindle Fire HD into a gaming console so you can enjoy mobile games from the couch on a big screen TV without making an investment in new hardware. Priced at $39.95, the Atlas seamlessly pairs with Kindle Fire HD via the Arena app, and the device connects to the TV with a micro HDMI cable.

Along with the Atlas controller, the first games are now available through Green Throttle’s Arena app as a free download from the Amazon App store.  The Arena app serves as a central location for consumers to access all Green Throttle supported games, control settings to pair their Atlas controller(s), and helps developers with app discovery by making their games noticeable and easy to find.

Games Now Available
With games releasing weekly, the following games are now available in the Arena app and can be played using the Atlas controller:

Coming Soon
Within the week, two additional games that have been extremely popular amongst the core gaming crowd, will also become available in the Green Throttle Arena:

“The global video game market is poised for the next round of innovation. With the Atlas Controller and Arena platform, we’re bringing the convenience and a next level gaming experience to consumers in an inexpensive and thoughtful way,” said Charles Huang , co-founder and CEO of Green Throttle Games.

Creating an Open Platform
Green Throttle is striving to create an open platform in order to push the industry forward and regain the creativity that was evident with games in the 1980’s. Green Throttle is already working with other “unconsole” makers such as GameStick to ensure the products work together, and the company is looking to develop more strategic partnerships in the coming year.

According to Ted Pollak , Senior Gaming Analyst at Jon Peddie Research: “Mobile game processing and development is advancing at a blistering pace, and new generations of mobile devices can easily render casual games on HD TVs. This could expand into more complex genre’s very soon, which could both expand the total market, and possibly disrupt incumbents. Touch screens have limited application in video games and a good controller is needed for the best experience. Green Throttle is ahead of the curve in this department and providing a simple, affordable, and standardized solution.”

Pricing and Availability
Consumers may purchase the Atlas controller for $39.95 at Green Throttle’s online store (http://www.store.greenthrottle.com) or the 2-player bundle for $89.99 and receive a $10 Amazon gift card for a limited time only. Atlas controllers are also available on Amazon.com. The Arena app is a free download from the Amazon App Store.