Setting up the MOGA

Setting up the MOGA should take no longer than a few minutes. When you buy a MOGA unit, you’ll also need to snag yourself a couple of AAA batteries before going any further. Once you’ve got that, and installed a single battery under each hand grip, you’ll need to download and install the MOGA Pivot application off of the Google Play store for free onto your device. This app not only acts as a curated marketplace for MOGA compatible games, but also as the sync between your device and the controller through Bluetooth. This does mean you will need the MOGA Pivot application running in order to use the controller. 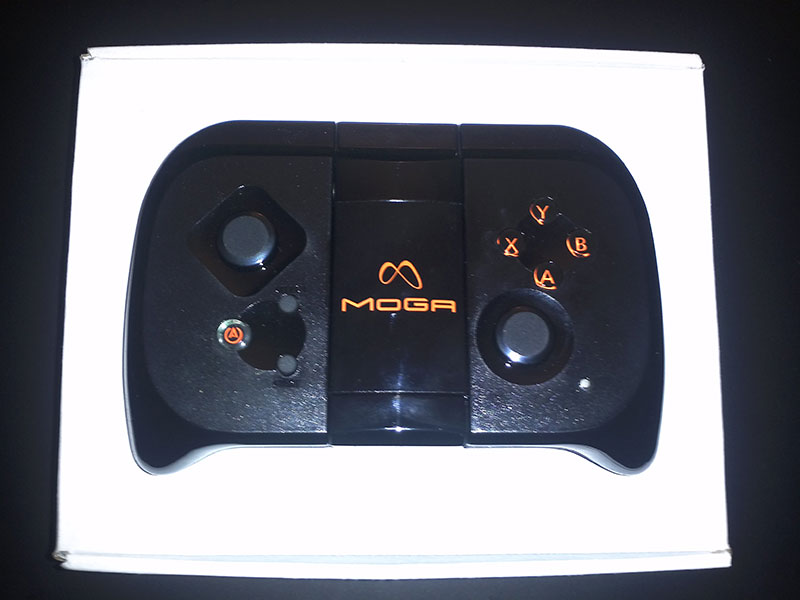 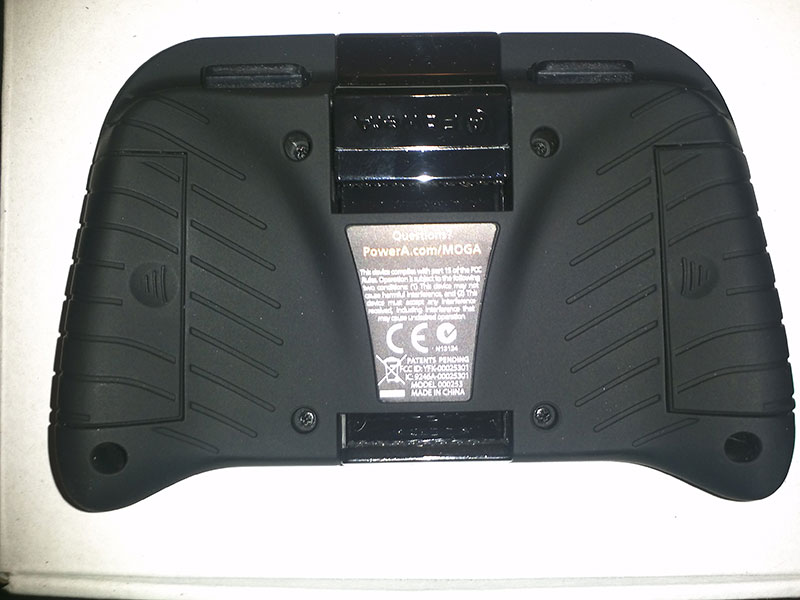 Clip your phone into the extendable holder that folds out and then open up the app and turn on your MOGA controller and you will see a blue light flashing. This means the controller is syncing with your Pivot application. It takes a few seconds and once it is synced up, it’ll flash green once and you’re ready to rock. You will also see a small green icon in the upper left part of your notifications tray that confirms everything is synced up. The adjustable clamp can hold pretty much any size phone right now so whatever device you’re sporting will fit in there. The only prerequisite is that you are running Android 2.3+.

As for button mapping, there is none that you have to worry about. This is because developers who use the MOGA SDK to make their games compatible have taken care of all that hassle for you. This is pretty much a plug-n-play solution for mobile gaming.

The actual controller itself comes with pretty much all the controls and buttons you would need to pull off some serious gaming. Whether it be an FPS game, a racing title or an arcade game, you will have enough buttons and joysticks to work your magic in-game with. Overall you get dual analog sticks, two shoulder buttons, four action buttons and standardized start and select buttons that are at your disposal. 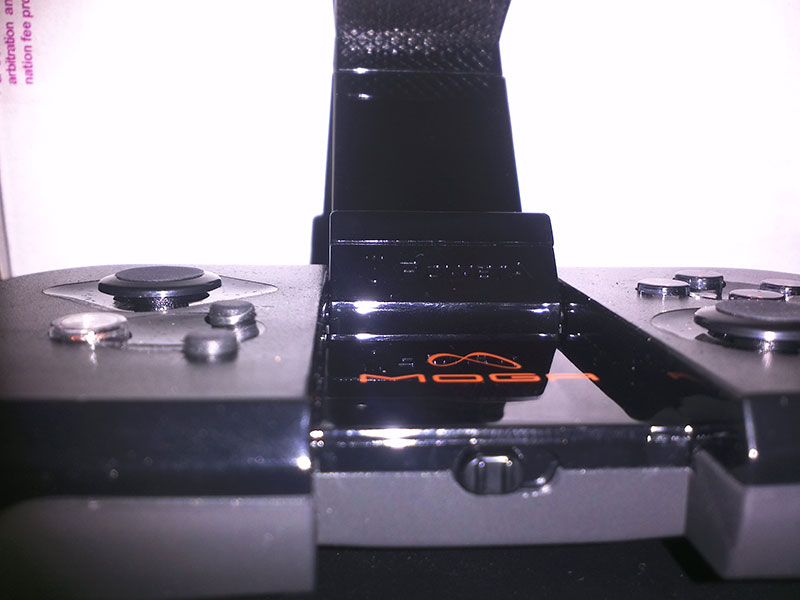 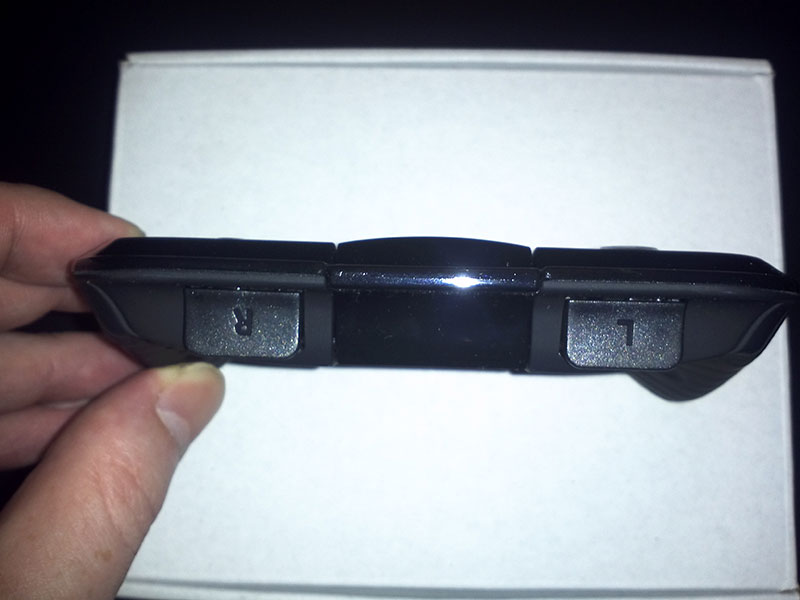 Underneath the controller you have a nice hard rubber grip to prevent your hands from slipping and having a loose handle on the controller in the middle of gaming. There is also enough weight with the controller that you don’t feel like you have to worry about breaking the damn thing if you get a little carried away while gaming.

For tablets, it is pretty much the same setup procedure but without the use of the clamp since, unless you can fold your tablet, it won’t fit. Instead you can just use the MOGA as a pure Bluetooth wireless controller for play games through the Pivot application.

The entire unit performed extremely well regardless of what game I threw at it. Asphalt 7, Dark Knight Rises, Pac-Man, Sonic CD and Dungeon Hunter 3 all worked flawlessly with the controls available. It was pretty much like playing on a proper portable gaming unit like a PSP or PS Vita. There was no lag or and issues with the controller disconnecting in the middle of a game and having to re-sync it up. In fact your gaming is only limited by whatever batteries die out first, whether it be your phone’s battery or the two AAA batteries powering the unit. 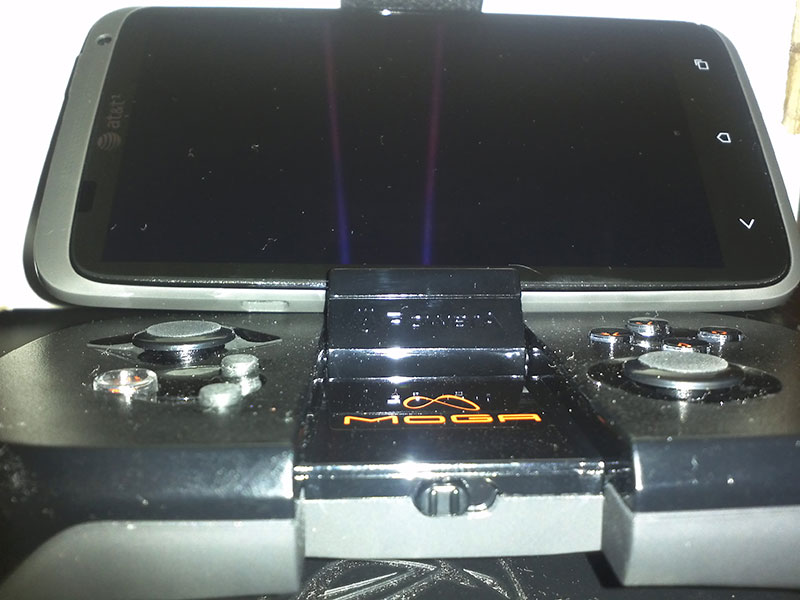 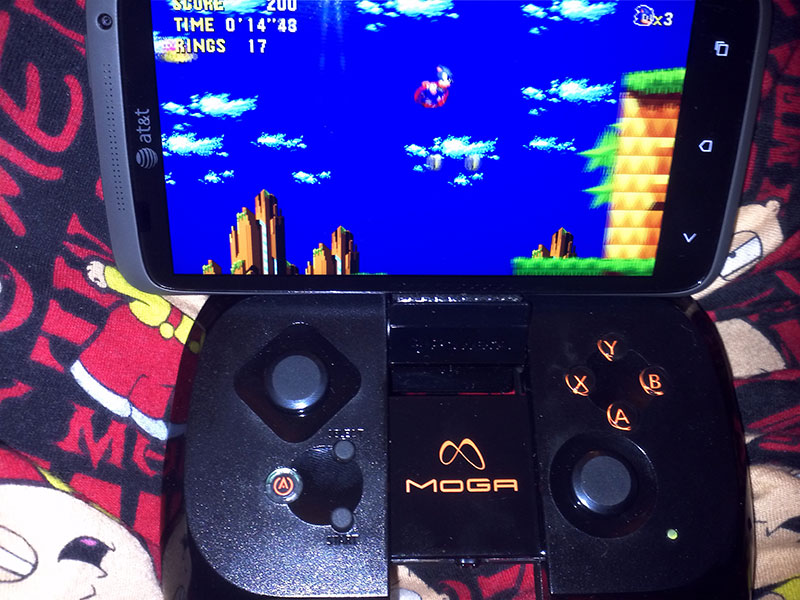 Navigating menus and anything else you encounter that doesn’t actually deal with gameplay also worked like a charm. It was just as though you were sitting in front of your favorite console, sifting through menus with your controller until you start up the game you want to play. Since each game is different, your experience with the controls will also be different since you will only be using some of them for some games, while others will require you to use all the controls. Regardless of that fact though, the controls were very responsive.

If you are thinking to yourself about how bad ass this controller would be to play games through emulators, you’ll need to quell that excitement, at least for now. The MOGA does not support any emulators right now although with the demand and popularity of emulators on Android, that should change pretty quickly. As for actual games, the MOGA already has 40 titles, all of which are big named games, available for play.

When you purchase a MOGA unit, it will come with a nice leather carrying case to protect your unit. Batteries are not included so you will need to pick some of those up. We mentioned the Pivot app earlier in this review and you will need to get used to using it since it not only acts as the launcher for your games, and the syncing tool for your controller, but also as the marketplace where you can find compatible games. 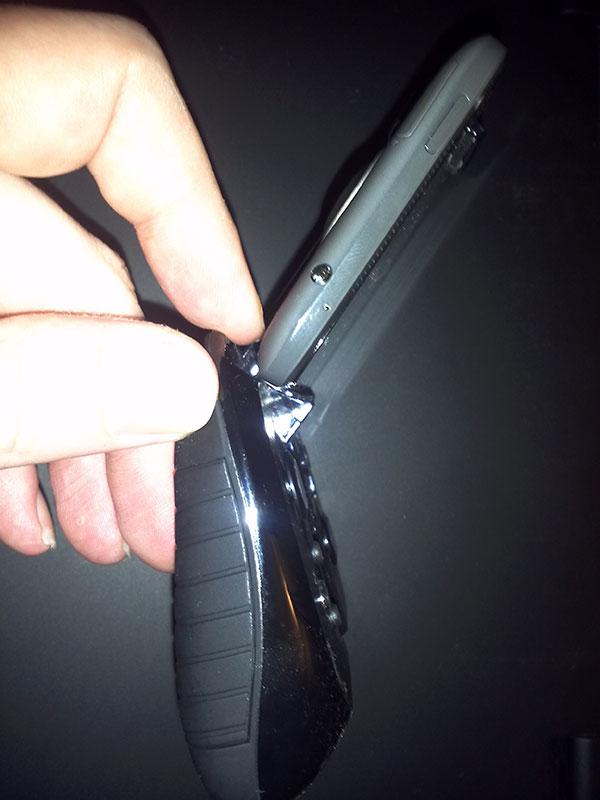 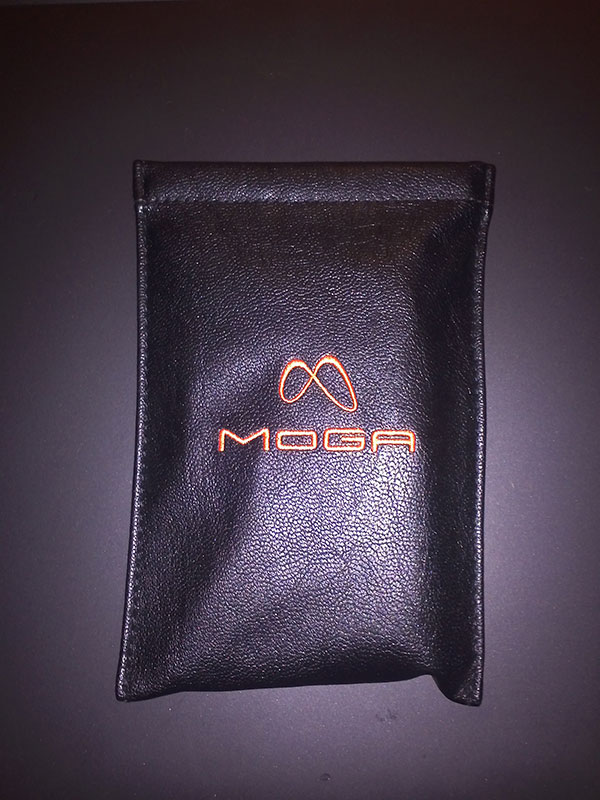 So what’s bad about the MOGA?

Well, honestly, not a whole lot. Depending on ho your phone is designed, the clasp, which is optional to use, can sometimes get in the way of the volume buttons. This sometimes means that when you put your phone into the clamp, your volume gets turned all the way down. This doesn’t happen with all phones, it all depends on the size of your phone and the volume buttons it comes with. Of course you don’t have to use the clamp at all and, instead, use it as a wireless Bluetooth controller. This is easily fixed though by just pushing your phone a little to the left so that the clamp isn’t pressing down on the volume button. It really isn’t a big deal.

Also right now, and this could merely be a bug and could very well be fixed soon, the Pivot application seems to not be able to recognize the fact that you may already own a certain game which you purchased on Google Play that is also available in the Pivot marketplace. This means, if you are impatient and can’t wait for the fix, you would have to repurchase a game you may already own through the Pivot Application in order to play it with your MOGA controller. This does not affect all games as some are synced to Google Play. However, other games, like most of the paid Gameloft titles, are affected. My guess is because they like to Gameloft’s WAP shop and not Google Play. This is probably just a small bug though. Also, the Pivot application doesn’t show all the games right now that are compatible with the MOGA controller which adds to the likeliness that all of this is just a bug with the applications that will be fixed soon. 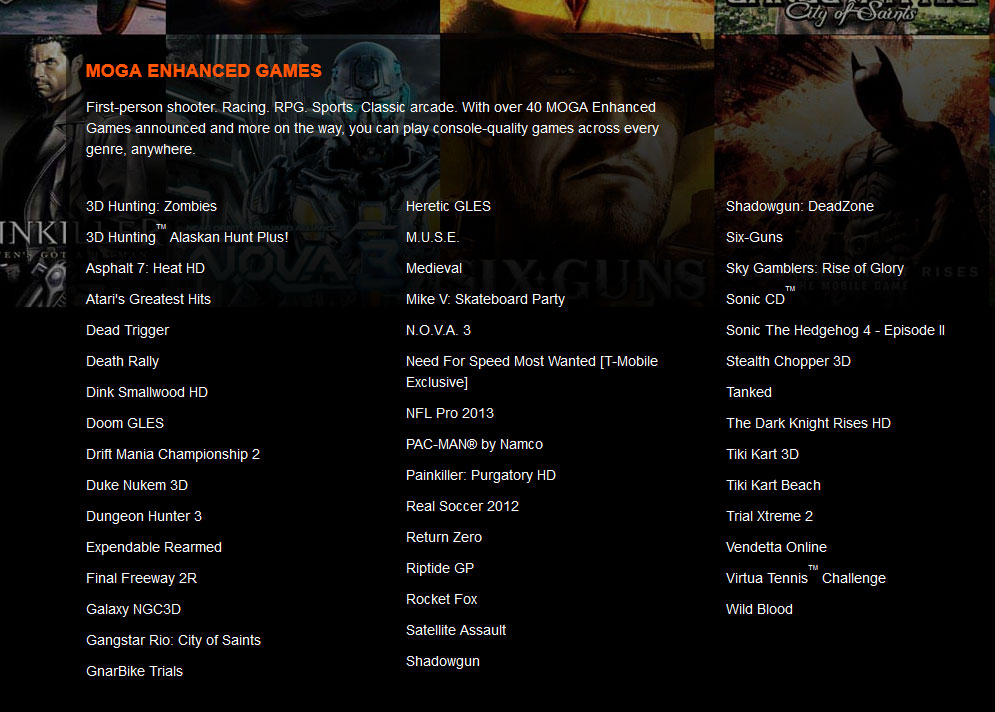 From our understanding, the Pivot application is supposed to recognize the games you already own and that are compatible with the MOGA game controller.

So should you get one?

If you do a lot of mobile gaming, whether it is of the more hardcore variety of games or the more casual ones, the MOGA will pretty much turn your phone into its own portable gaming system. Even without the use of the clamp on your phone and instead using it wireless with your phone or tablet, the MOGA as a controller works surprisingly well. Considering the price of $49.99 for this and compare it to other controllers, even ones not actually meant for mobile gaming, and the MOGA brings a lot more value to the table then the rest of them.

If you are interested in grabbing one of these, you can do so at BestBuy.com , Walmart.com , Toysrus.com , PowerA.com , Amazon.com . If you want to try it out before you buy one, both Best Buy and Toys R’ Us have demo units out for people to play with. Select T-Mobile stores will also begetting the MOGA in stock as well.