Code Monkeys have been a long time developer of games for various platforms including the Wii, PSP, iPhone, Xbox and more. Mostly specializing in 3D sports games, Code Monkeys made the leap of faith onto the Android platform recently with their new game Manic Monkey Pool which is a 3D pool game with all sorts of twists including oddly shaped pool tables to play on.

Gameplay: This is a 3D pool game so the object of the game is just like any other pool game in that you have to clear your balls off the table then the 8ball before your opponent does. You can play either single player or 2 player games or if you don’t feel like compete you can always choose practice mode.

What is unlike most pool games available right now is the weird shaped tables you play on. Everything from an L-shaped table to a hexagon and other various shapes. This means you can pull off some pretty impressive tricks shots once you get good at the game. You also have the ability to put spin on the ball to try and set yourself up for another easy shot after you sink a ball on your previous one. 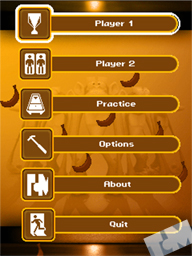 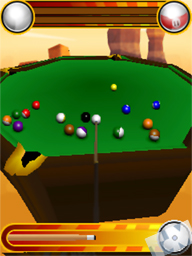 Graphics and Sounds: The graphics are 3D and are quick rendering thanks to the more ‘blocky’ style they have except for the balls. While playing on the Nexus One there was no lag in the shooting, physics, movement or graphic rendering during gameplay. Most phone should be able to play this game thanks to the easy rendering of the graphics with little to no performance issues (regarding the older gen phones).

Controls: The controls are pretty responsive. To aim just move your pool stick left or right by tapping the screen on either side. You can control the spin the ball has in the bottom right corner by using your finger and tapping where you want your spin to be, it will be shown with a little black dot being where you want the spin. So if you want back spin you would tap the bottom of the ball.

The only issue I had with the controls was that sometimes I couldn’t get to the mode where you select how much power you wanted behind the shot. Perhaps it was just my thumbs not functioning properly but from time to time it would take a few taps before I was able to adjust my power and then take my shot. 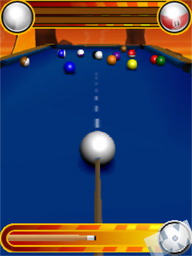 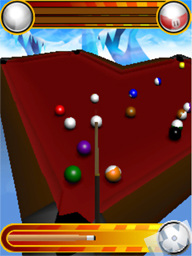 Overall: Manic Monkey Pool is Code Monkeys first title to land on the Android market and it is a solid game at that. Most pool games aside from the odd one usually tend to have many issues to deal with. In this game I only really had one which is nice for a change. The controls were really well done where a lot of pool games have arrows all over the place for you to manipulate your shot, here you just had to tap a few times and you are good to go.

If you like pool games then definitely give this one a shot. There is no free trial version to test out but price at roughly $1.25USD you pretty much can’t go wrong, especially being one of the lowest priced pool games available right now for Android. Hopefully we see more titles for Android soon from Code Monkeys.