Last week reports began circulating the internet that Razer and Ouya were having coffee together and talking about Razer buying up the troubled Android console maker. Well it appears that the deal is finished and Razer now officially owns Ouya, all of which was confirmed through an announcement from investment bank Mesa Global. The bank was acting as an advisor for Ouya during the deal. We won’t dredge through all of Ouya’s history of problems again, it is well-known by now and we’ve reported on them a few times already. However, if you want a brush-up course, you can check out our previous coverage regarding this purchase from last week. 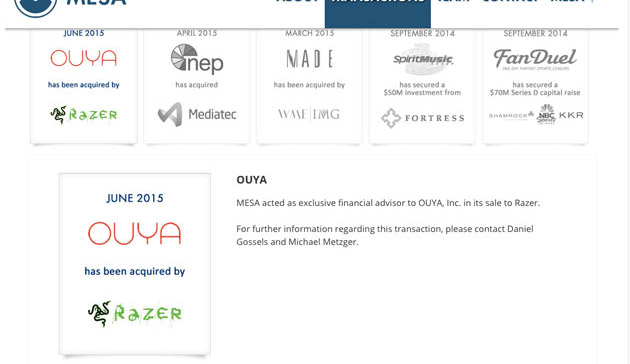 The entire situation is interesting though because both companies have had trouble with the set-top box / micro-console industry. While the Ouya started off strong, it quickly went downhill with numerous problems, even after getting injected with large sums of money a few times. Razer, on the other hand, released their ForgeTV earlier this year and has so far not done so well for itself. Perhaps buying Ouya will breath a bit of new life in a possible new set-top box / Android console from Razer. What it does give them is the Ouya Marketplace, which has a lot of games and apps in it already.

It’ll be interesting to see how this progresses now that the deal is done. Interestingly enough, the announcement seems to have been removed from Mesa Global’s listing of finished purchases, meaning the official announcement from the two companies hasn’t happened yet. However, the above image is the listing for the Razer / Ouya purchase.