Tinytouchtales and Mexer out of Germany, have created a wonderfully enjoyable dungeon crawling card game, that is uncomplicated and fun. If you are unfamiliar with card games, this is a perfect one to introduce you to the genre. The learning curve is easy, and the game has great depth when it comes to strategy and winning.

I will be the first to admit that I don’t play card games. Some of the staff of DroidGamers really enjoy that genre. Me, not so much… until now. I was intrigued by Card Crawl. I downloaded the game to try it out, and immediately bought the full game after playing a few rounds. Since then, I decided to go ahead and download Hearthstone too, but that is another review for another time. I have a lot of games on my multiple devices, but Card Crawl has been receiving the bulk of my time lately. That is how good this game is to me. It goes by quickly, is challenging, and has tons of replayability.

“Card Crawl is a Dungeon Crawler built around a modified deck of standard cards. The basic idea of the game is to clear the Dungeon (a fixed deck of 54 cards) without dying and as much gold as possible. The gameplay evolves around managing your limited inventory and health, by using equipment and special cards. Monsters and equipment are fixed, but each play through you can use 5 special ability cards that can be chosen by the player (mini deck building) Different ability cards can be unlocked by spending the collected gold.” – Tinytouchtales/Mexer

Tinytouchtales is a small team out of Berlin, which was founded by Wiebke and Arnold Rauers. They are the creators of Card Crawl and handled the game design. Mexer, also known as Max Fiedler, is known for his illustration and animation talent. Rounding out the team, Oliver Salkic provides the audio in the project. This is a well-rounded team, and the proof is in how polished a game Card Crawl is in multiple aspects. As you start your first game, you feel as if you have walked into a tavern. You hear the sounds of multiple conversations in the background, raucous laughter and the sounds of clinking bottles. You are introduced to the first card dealer Hoerni, who nonchalantly chugs his ale in front of you, before dealing you your first hand. The atmosphere is ripe for a challenge. Are you up for a quick card game?

The dealer has a stack of 54 cards. The goal of the game is to have all the cards dealt to you. You win when there are no cards left to deal, and your main character is alive. The dealer sits at the top of the screen, and you are at the bottom of the screen with three places to put cards. Two slots are shown as hands, one slot is your backpack, which you can keep a card at all times. The dealer also has a shop, which allows you to sell your cards back to him. This helps because you can only be dealt new cards, when there is only one card left in front of you. 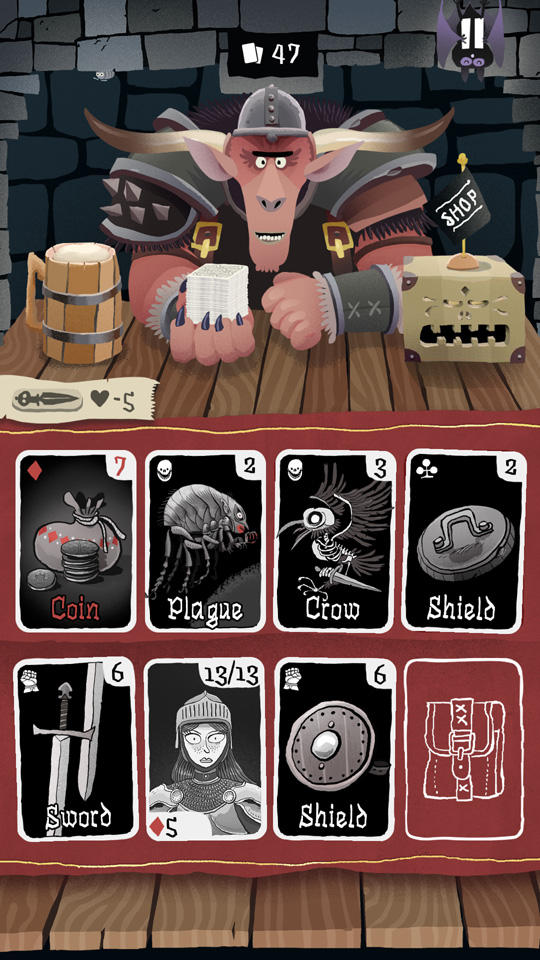 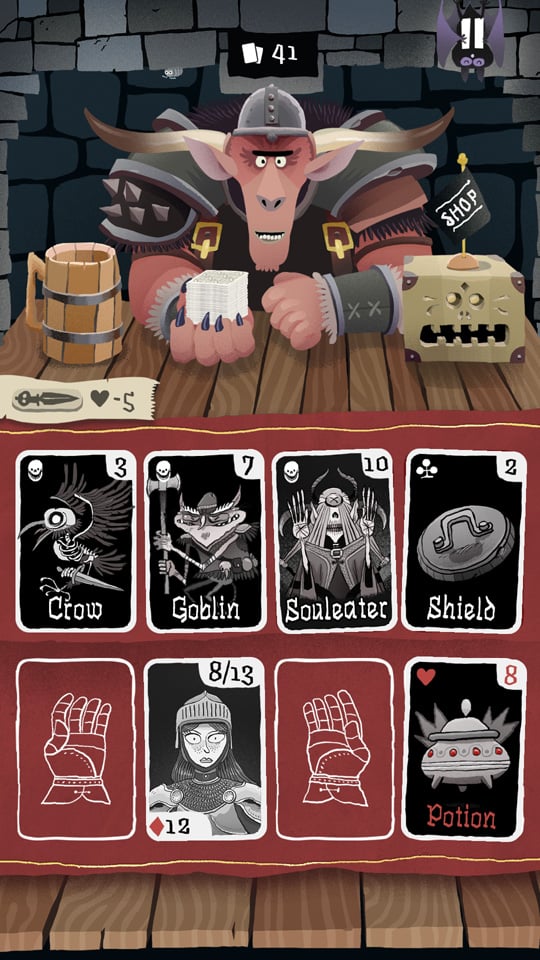 Your character has 13 hit points. You start off with a Lady Knight, or an egg shaped knight. You are able to unlock an Archer, Assassin, and Woodlouse Lord. As you sojourn through the dungeon (Having cards dealt to you.), you will encounter trolls, soul eaters, spiders, goblins and other beasts which have hit points of their own. Their hit points vary from 2 to 10 typically. How do you defeat them you ask? As the dealer hands you the cards, you will be able to choose from swords, shields, ability cards and potions to help your health/hit points. Ability card provide you with various additional skills. In the free game you have access to ten ability cards. Unlocking the game with a single IAP, gives you access to thirty ability cards.

What makes the game fun is that it feels spontaneous. You never know what cards are going to be dealt, and you have to choose what you do carefully, and prepare for the worst. There were many games when it came down to me having one hit point left and winning the game. Or, even more frustrating, having the last card being dealt, which was a troll or spider, and it had the same amount of hit points as I did, which meant game over.

Though the setup of the game is simple, there is a fair amount of strategy involved in the game. It is all based on unlocking the large amount of ability cards. You are able to unlock the additional cards in the full game, when you continue winning games in a streak, or after you successfully beat your high score. The dealer gives you a key at the end of those games. However, you not only need the key, but you also need the points to unlock the ability cards.

Part of your dungeon crawling adventures means that you will encounter loot. You always want to put as many coins in your pack/hands as possible. These add up throughout your games, and then can be used to unlock the ability cards, once you have won keys. In the paid version of the game you still have to unlock the ability cards with coins and keys. There are no in-app purchases, after you unlock it, but you do have to continue playing the game to amass coins and win keys. It does not bother me to not have all of the ability cards unlocked once you pay for the game. Some might find this as a minor annoyance, but to me, it helps with the replayability of the game. You want to play more, to see what ability cards  you will be able to unlock.

There are currently 30 ability cards to unlock. They all have different uses, and some I have found are definitely more valuable than others, but again, it depends on what you encounter in the dungeon. Some cards like Leech, allow you to attack a monster and heal up to 3 life points at the same time. This is quite valuable if you have run into some trolls and souleaters, which typically have the higher hit points. The Sacrifice card allows you to attack a monster card for the amount of player life missing. This has saved me countless times, when I was down to two hit points and faced a souleater, which was ten points. Since the highest hit point value I could have at the time was thirteen, that meant I could use the Sacrifice card, attack the Souleater with eleven points and still win the game. Hoerni was definitely upset about this and it showed. He slammed his fist against the table and steam came out of his nose. It is wonderful animations such as this, that really add to the fine details in the game. Other ability cards are Killing Blow, Exhange, Steal, Lash, Bash, Reflect and so on. 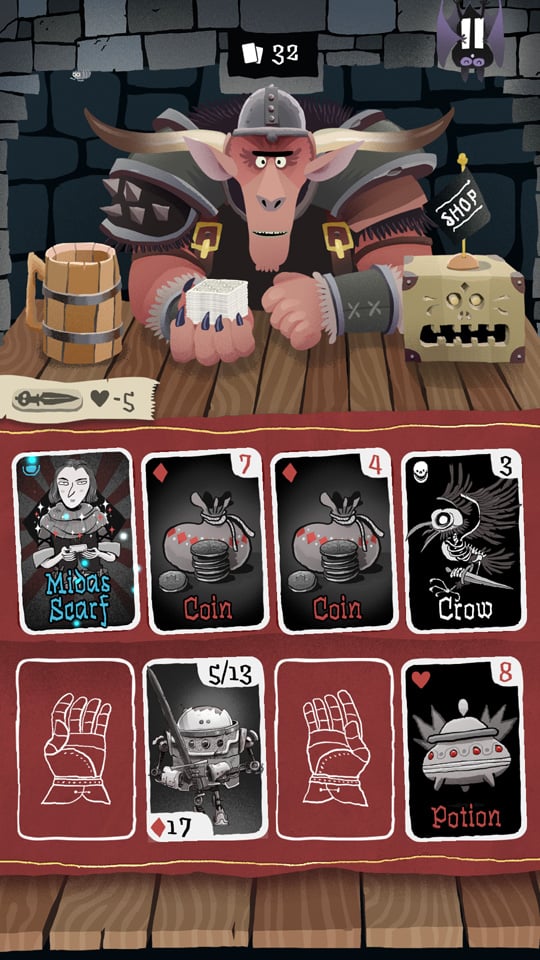 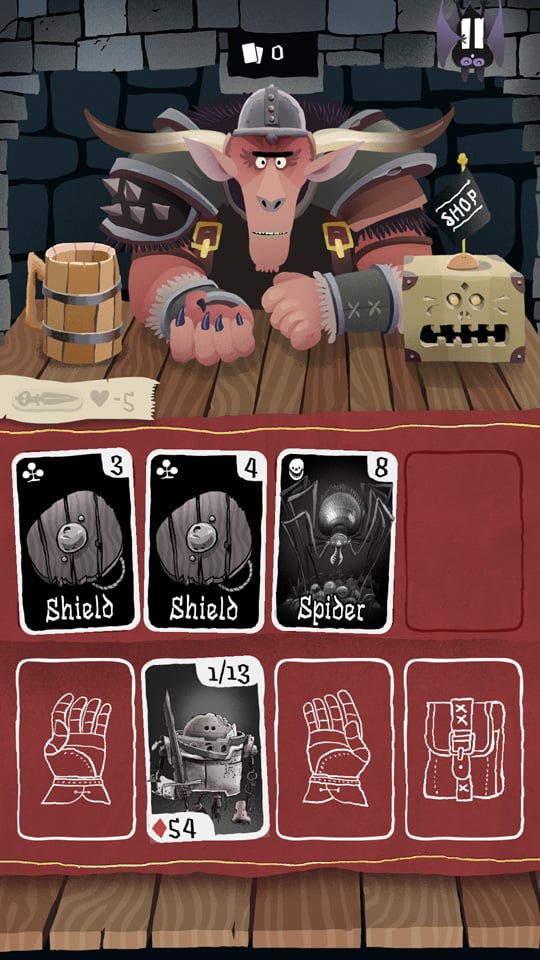 As I said before, strategy abounds in this game, as well as basic math. Quickly determining what cards will keep you alive the longest, depends on your strategy. Your are able to attack with your sword, which immediately clears the card slot once you are done with the attack. Sometimes you sword has enough hit points to take out the local troll. At other times, you will need to either have two swords, or a sword and shield to do the job, or some combination of both and an ability card. An ability card such as Frenxy, allows you to attack a monster twice with the same weapon. Bash allows you to use your shield as a weapon. Shields are different in that when the monster attacks you, your shield can defeat the monster completely. This can occur if your shield defense points are the same or higher. If not, your shield lessens the attack of the monster, but you still end up losing some of your thirteen hit points.

You can also choose five ability cards (mini-deck) to play through a game as well, which makes the game a bit more challenging in some ways. Also included is a daily dungeon which is just that, a random dungeon crawl that you can experience each day. There are are four types of games to play: Normal, Constructed, Daily Dungeon, and Streak.

Card Crawl is a great game to have on your device. Games can be played in less than five minutes, and replayability is quite high. The game is integrated with Google Game Play Services and there are six achievements to unlock. There are also leaderboards to compare cards and scores. There is also a good tutorial, cloud saving, and statistics, which track your win/loss ratio in the different game formats. One thing to note is that playing Card Crawl really heats up your device. Even though the games can be played quickly in succession, doing so heats up my phone every time. There is an energy save mode that they have included with the game that helps some with this, when you turn it on. The heating up of my device would really be my only gripe about this game. Be careful, heating up means possible battery drain as well.

You can download Card Crawl for free in the Play Store. The only in-app purchase is to unlock the game for $2.99 For some reason, not quite sure why, but when the sale was complete, it ended up costing something like $3.26, which is unusual.

Card Crawl easily gets a recommendation from me. It is a well-produced and fun card game that novice card players will enjoy, and possibly those have been playing card games for years. It won’t take long for you to decide if you like it or not. Chances are though, you will enjoy it. You have nothing to lose, as the game can be downloaded for free. If you like it, unlock the full game, and enjoy it without the worry of additional IAP’s. Tinytouchtales and Mexer have created one of the most enjoyable games this year, and that is saying quite a bit, considering all the great games being released for Android devices.