Contest: Become a villain in Guns N’ Glory by Handy Games. Come on, you know you want to be bad!

Our friends over at Handy Games are holding a contest in regards to their Guns N’ Glory game to celebrate 50,000 fans on Facebook. In celebration of this great moment in Facebook fan history, for Handy Games anyways, they are letting you guys come up with a new unit in the game. Even better, it’ll be modeled to look like you!

You read that correctly, not only will your unit be in-game, it will be made to resemble you should you unit be chosen as the winner. Now you can really be a villain in a video game without actually having to be a villain!

How to enter and contest details: 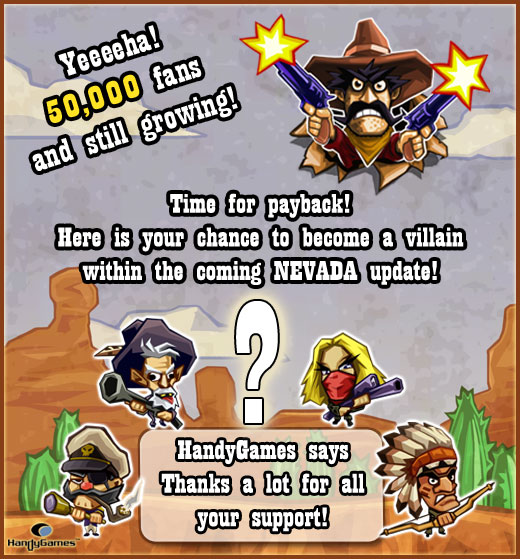 Good Luck! Press release below for your viewing pleasure. Make sure to use the form below to enter!

Design your character submission form: Be a villain in Guns N’ Glory

HandyGames™ celebrates its 50,000 th Fan on Facebook!
Fans can submit their ideas for a new unit for Guns’n’Glory – Nevada!

Giebelstadt/Germany, 31th March 2011. Today, HandyGames™ celebrates its 50,000 th fan on Facebook landmark by offering all HandyGames™ fans on Facebook the chance to appear as a character in the next Guns’n’Glory update!

Fans can submit their ideas for a new unit and what kind of weapon or ability it should have. One entry will be selected and the winner will not only see his or her unit idea implemented in the Guns’n’Glory Nevada update but also the character will be modelled to resemble the winner!

“We are excited to have such a large following on Facebook and we want give our fans the opportunity to participate actively in the creation of the next Guns’n’Glory update.”, comments Markus Kassulke, CEO HandyGames™. “We greatly value fan feedback and we’re always trying to incorporate ideas and suggestions from our fans into our products”.