OlliOlli was developed by Roll7 and published by Devolver Digital. It was a huge hit on PC and then later on mobile devices. In particular, the Nvidia Shield devices. The sequel to OlliOlli is OlliOlli2: Welcome to Olliwood. It is now live in the Google Play store. What is more unbelievable, is that the game is only $0.99 Keep in mind, that this game requires a controller, and more than likely, is only available for Nvidia Shield devices.

Update: February 22nd, 2016 8:36am PST: Just a quick update regarding the pricing of OlliOlli 2. At the time of this article being written, the price was $0.99. Whether this was a mistake or an early launch promo price, we don’t know since it wasn’t officially labeled as a sale price. The price now, however, is $14.99 USD. Hopefully this clears up any confusion.

OlliOlli was popular because of its tough-as nails gameplay, dope soundtrack, great controls and tons of tricks to pull off. Keep in mind, that OlliOlli is still selling for $12.99 in the Play Store. So, to find that the sequel which is just as good, selling for $.99 is quite a deal. 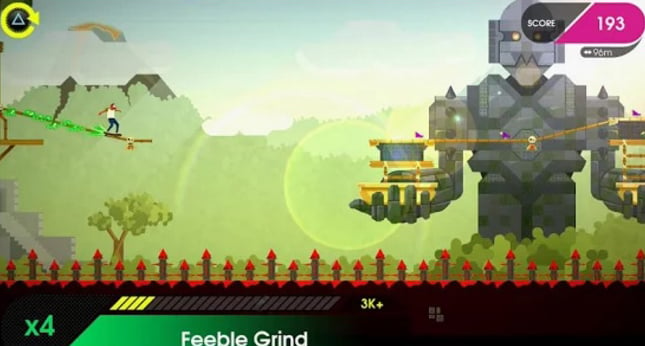 Welcome to Olliwood is more of the same that made OlliOlli so popular. If you are into skating, and pulling off amazing tricks in some of the most insane places, Welcome to Olliwood is the game for you. The game still sports those pixels that made the first enjoyable to see, and it still has a good soundtrack. The controls, once you get the hang of them, allow you to pull of some really wild combinations, while trying to stay upright without bailing, as long as you can. Yes, this is a game that takes practice and skill, but you are rewarded with a sense of accomplishment when you reach the end of a level, and you have completed all the goals on that level. 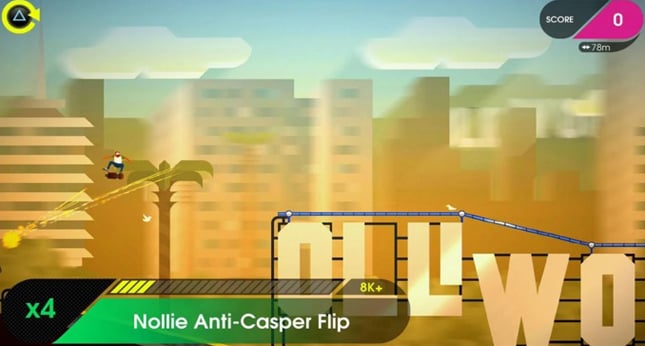 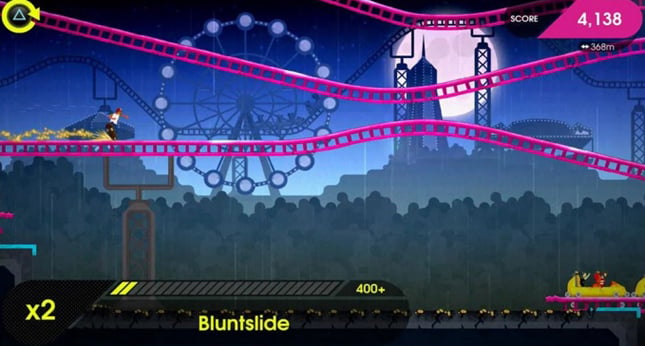 “Drop in to Olliwood and prepare for finger-flippin mayhem in this follow up to cult skateboarding smash OlliOlli. The iconic skater is going all green-screen with a stunning new look, plucking you from the street and dropping you squarely in the middle of the big screen’s most bodacious cinema locations.

Revamped Paths and Combos: The sequel boasts all new ramps and epic hills allowing for monster air and multi-route levels. Further, OlliOlli2’s combo system has been expanded with the joy of manuals, reverts manuals and grind switching giving you more control and expression than ever before.” – Devolver Digital/Roll7

Welcome to OlliWood is full of challenges to complete. the game can be tough if you aren’t familiar with the different nuances of the controls. The good thing is that the game includes a Trictionary, that shows you how to pull off different types of tricks. You would do well to study the Tricktionary before taking off on a level. Some challenges you may complete easily, while others are going to take some time learning to pull off. Getting the high score is only one of the many challenges on each level. 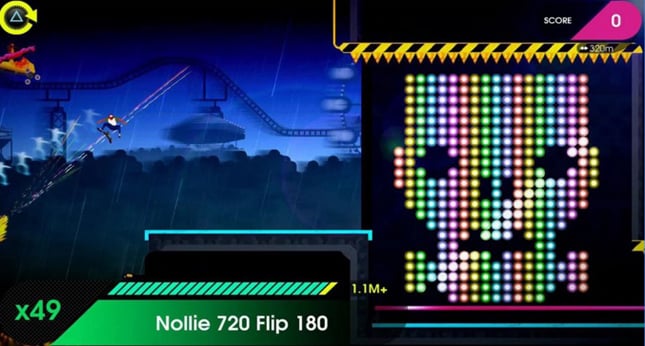 OlliOlli 2 is integrated with Google Game Play Services with 27 achievements to unlock and leaderboards to compete on. There is a ridiculous amount of gaming to be had in this game for a mere $.99 If you have a Shield device, this is a game that is easy to recommend. It may not be easy to play, especially in the beginning, but once you learn the tricks of the trade, it’s game on!