Officially titled Judge Dredd: Countdown Sec 106, this interactive RPG adventure book comes with all the features that you would find in any of Tin Man Games other releases such as the 3D dice rolling with realistic physics, interactive character sheets and even different difficulty levels. The story itself is actually a newly written one by Nick Robinson and the art has been done by various artists who have worked on other Judge Dredd works. 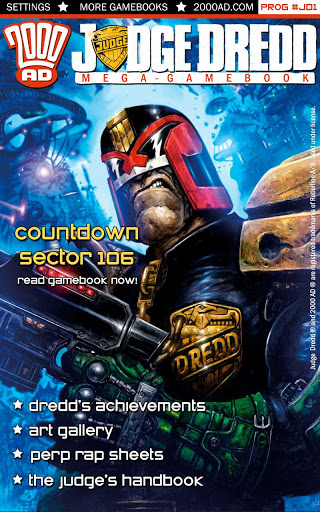 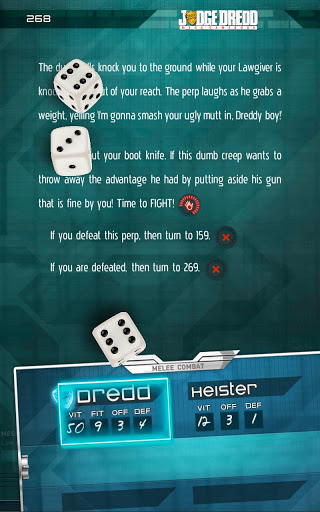 • Newly written interactive story by Nick Robinson that takes the reader on an epic ride through Mega-City One.
• Custom built e-book interface, which is easy to use. As easy as reading a book!
• Read in portrait or landscape. (tablet only)
• New gamebook rules and battle system using the Gamebook Adventures Engine. Judge’s Handbook included so that rules can be accessed at any time during the adventure if you need to refresh yourself.
• Real-time 3D dice rolling with realistic physics. Shake the device like a dice shaker and watch the 3D dice bounce around the scene and off each other.
• Make skill rolls based on the weapons you use, your fitness levels, and your perceived authority.
• Accessible inventory sheet at all times during reading, which auto updates when you pick up an item, your stats change, or you gain valuable patrol notes.
• Difficulty levels – Hardcore, Medium and Novice. Play the book how it was meant to be played or casually read it in an easier mode.
• Use bookmarks to save your progress, helping you get past tricky sections.
• Achievements to collect throughout the book for those who wish to thoroughly explore all aspects of the story.
• Perp records sheets to collect during the adventure. Once a criminal is arrested or killed, their database updates with background information. Catch them all!
• Beautifully illustrated by German Ponce and other popular Dredd artists. Once found, each illustration is mounted on the gallery wall.

If you’re a fan of Tin Man Games and their Gamebook Adventure series of interactive RPG books, and also happen to be a fan of Judge Dredd, then you will want to pick this new one up. Grabbing a copy of Judge Dredd: Countdown Sec 106 will cost you $5.99.

On a side note, for those of you waiting for the next installment into the Fighting Fantasy series The Forest of Doom to be released onto Google Play, you won’t have to wait much longer as Tin Man Games has placed its release time as next week.