Sony parent corporation said the images were “definitely fake” before switching their tune to a more professional “We don’t comment on speculation or rumors”. However they never once said the device doesn’t exist. Sony Ericsson did how say that to us here at DroidGamers awhile back when we were breaking this story and the Playstation job listing which asked for Android development experience. That listing was changed real quick. 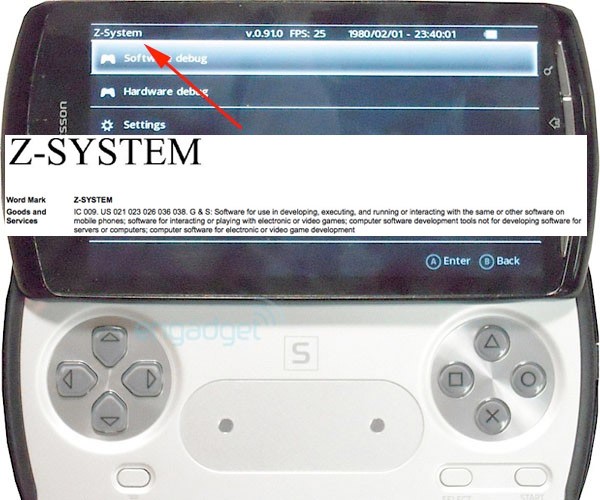 Even more information has come to light though both from Engadget and another news source, VG247. According to an Engadget source, the Z-System seen in the screenshot above is actually not only trademarked by Sony Ericsson but they also own the domain z-system.com. The patent for the Z-System reads:

So it’s not hardware related but software meaning z-system could be the code name for the platform which will run on this phone through Android. Also interesting to note, yesterday we found out the code name for this device is “Zeus” which another source over at VG247 confirmed. It is very likely that the Z in Z-System stands for Zeus. You can check out the trademark/patent below:

Also on top of that Peter Dille, Sony’s Senior Vice President of Marketing mentions that due to the lack of a cellular data component, the current PSP is limited in what it can do. He also mentioned that Sony does have relationships with Google and that if something isn’t connected to a cellular network then it is limiting players and content delivery.

“The PSP is a Wi-Fi device,” he said. “People are used to having always-connected devices.” Dille also noted that current smartphone platforms don’t give users a hardcore experience, instead providing “Time-killers,” which “gamers aren’t satisfied with.”

All in all it is very compelling evidence that the Sony Android Playstation phone is real and heading our way very soon. You can check out Peter Dille’s conversation with CNN if you are interested in reading the whole article.