iOS & Android taking a chunk out of the Nintendo DS market share.

Interesting statistics coming our way from Flurry which shows that between Android and iOS, the market share for the Nintendo DS and the Playstation portable are decreasing while the mobile phone gaming market share is increasing… greatly. In fact Nintendo’s DS lost a fairly large chunk of their market share when it comes to portable gaming.

While the Playstation portable only lost 2% of it’s market share, the Nintendo DS lost a huge 23% while iOS and Android’s market share increased from 19% to 34%. The time these stats were taken was from 2009 to 2010 in the US. Obviously part of the reason is due to the amount of devices that are coming out, specifically with Android. When asked, the President of Nintendo said that right now iOS is more of a threat to Nintendo than Microsoft’s Xbox360.

“Do I think that in the near term [Apple] can hurt us more than Microsoft?” Nintendo of America President Reggie, “Absolutely.” 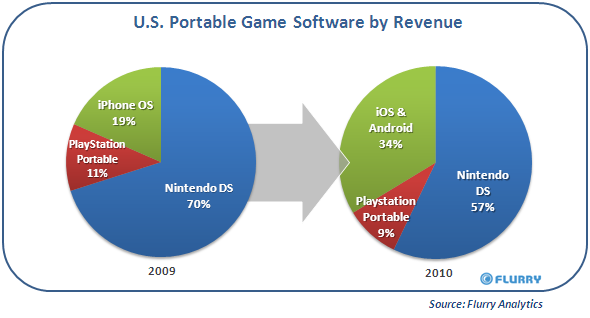 That was last year and now they have Android to contend with even more considering Android has devices specific to gaming such as the Xperia Play and other rumored devices in the works such as Sony’s S1 gaming tablet. Top that off with regular Android phones coming with Tegra 2 dual-core chips with quad-core not far behind, and that becomes a big threat.

This is of course relating to mobile gaming. In terms of gaming revenue overall, consoles are still winning that with 76% of all gaming revenue coming from them. That of course may change in the future at this rate. The release of the Nintendo 3DS and Sony’s NGP probably won’t have a whole lot of effect on the current trend of iOS and Android either. So where does that leave companies like Nintendo who once dominated mobile gaming?