I was elated when I learned that FIE Swordplay would eventually make its way to Android. Checking out the first few screenshots and looking at videos, let me know the force could be strong with this one. If you enjoy the extremely popular, but rarely seen sport of fencing, then FIE Swordplay is a game you should check out. If you aren’t familiar with fencing, this game is the perfect way to learn more.

FIE Swordplay is a game that is developed in association with FIE or The International Fencing Federation. My.com, Saber Interactive and Pestel crew are the game development teams. The game has an excellent tutorial, sleek graphics and really good gameplay. With simple controls and a pretty hefty campaign, and multiplayer tournaments available, FIE Swordplay is right on target. 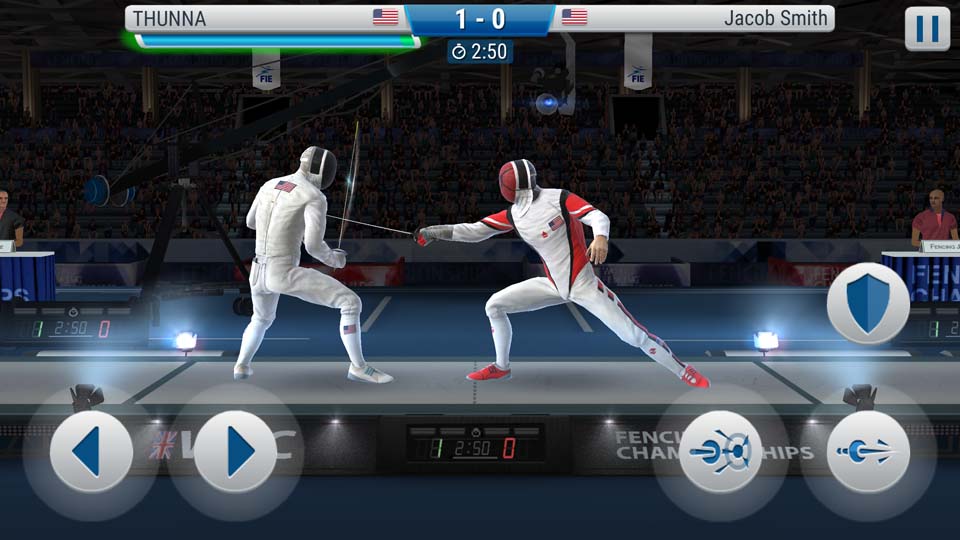 “FIE Swordplay is the first mobile game with real authentic rules for fencing with foils, swords and sabers that is officially supported by the FIE. Learn real techniques – from simple thrusts to powerful lunges and devious feints. – FIE

FIE Swordplay released on iOS not too long ago. Fortunately, we didn’t have to wait to long for the Android version to appear. Through the campaign mode of the game, you will compete in different countries, as you gain skill in this unusual athletic sport. After the brief tutorial explains the game mechanics, you are off to compete. The on-screen controls are perfectly placed, so you don’t have to worry about hitting the wrong buttons. Two arrows on the left control the left and right movement. On the right are thrust and lunge. Just above those two buttons is the parry button. While the game does offer a smooth and easy learning curve, as you level up your character, you will begin to notice the depth of gameplay and techniques available in the game.

Variety in gameplay makes FIE Swordplay entertaining. Once you are in a particular city and country, there are different types of matches you will compete in. Each of the matches offer a certain amount of XP. There is a meter in each city. As you win your matches, the XP fills up. Once the XP is full for the region you are competing in, you are invited to compete in a final match for the city. The matches range from 3 to 5 points/hits, or attack/defend, timed matches, and matches that allow you to try out different equipment and so on. The variety keeps you engaged in the game and tests your tactical abilities. Some opponents require more parrying, while others respond to feints and lunges. 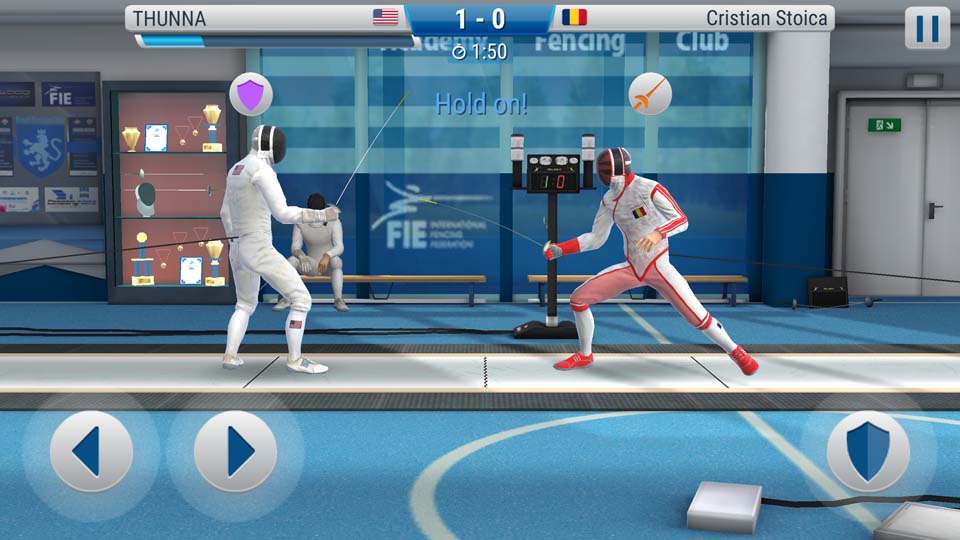 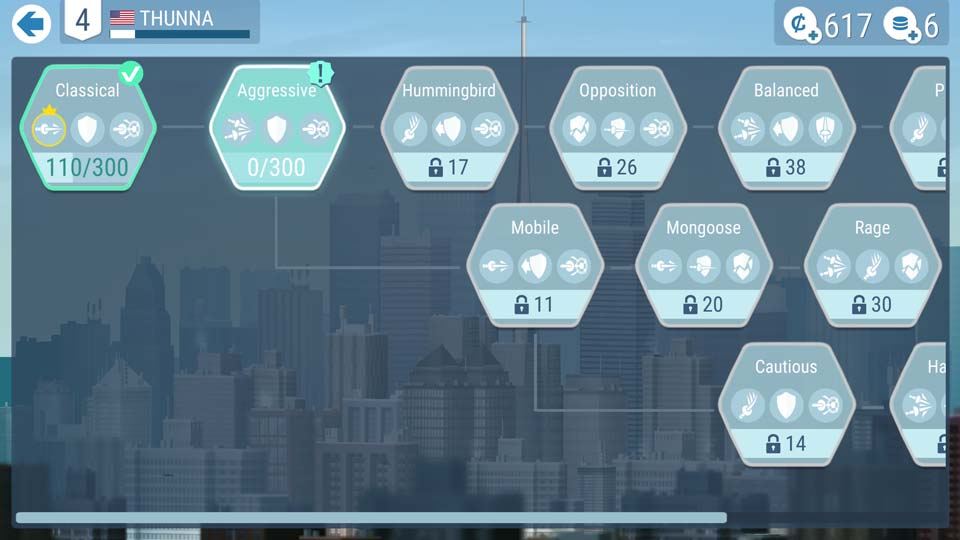 The gameplay is cinematic, from the opposing fencers stepping to the screen with arms crossed, to slow-motion replays of the fencer striking the winning blow. The camera angles vary during the replays. Sometimes the view is from above, and other times the camera zooms in. It all works quite well together, and the graphics are top notch too. There are a few different arenas that you will be fighting in. As you continue to play the game, you will notice that the arenas are recycled, even though you are traveling to different countries to compete. It would be nice to have additional arenas to experience.

Your character is customizable, and there is the option of playing as male or female. You can notice slight differences in the characters, but you never see your player’s face or the opponents, since they are always behind a mask. You can upgrade or switch out all of your character’s equipment from masks to jackets, pants, shoes and foils. Some of the equipment you win and others can be purchased. Each piece of equipment affects your concentration and reaction time. How you choose to equip your character becomes part of your fighting strategy. There is quite a bit of depth when it comes to customization, and this too enhances the game. 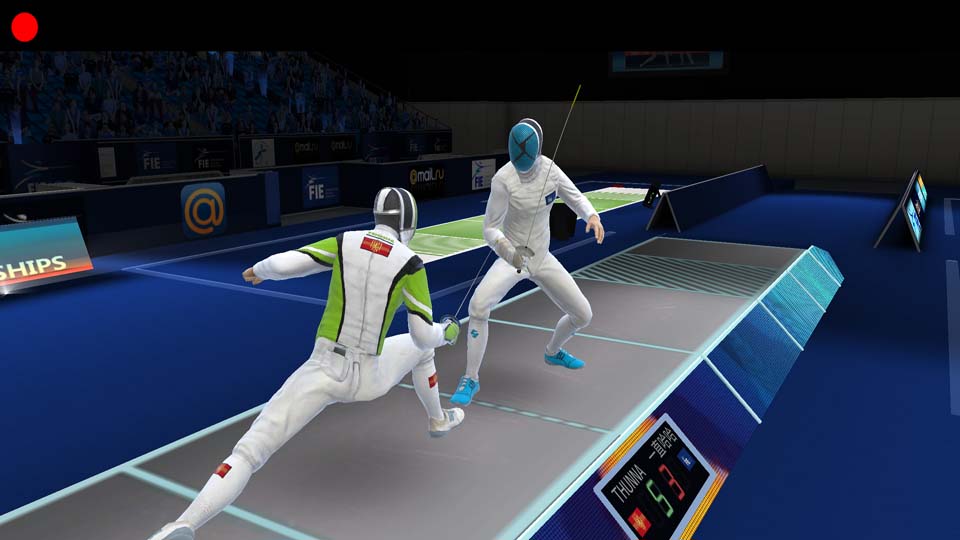 Equipment is only part of the upgrading process. You will also upgrade your fighting style or repertoire. You start off with a Classical fighting style. As your character gains XP, you can choose different ways to modify your style. Starting at Classical, you then can move to Aggressive, Hummingbird, Mobile, Opposition, Mongoose, Balanced, Rage, Cautious, Cobra and so on. Unlocking the different styles occurs during the campaign portion of the gameplay. There is also a tournament mode where you play against other players. In the World Cup, you earn rating points in combat to win different prizes. The prizes could be equipment, cash or coins. These are timed events, so the more you play and win, the better your chances are of obtaining prize money.

FIE Swordplay is free to play, which is probably one of the few downsides to the game. Not because the monetization structure goes up to $100 because it doesn’t. It caps at $4.99 The main problem is that campaign matches and multiplayer costs energy and coins. Sure, they replenish over time, but it is frustrating to have to wait for them to do that. You can always spend $4.99 to get the maximum amount of coins and cash (separately), but it would be great to have one price to unlock unlimited energy and PvP matches. It is not all gloom and doom with the free to play structure, because at least there are no ads to deal with.

The game is integrated with Google Gameplay Services with a whopping 48 achievements to unlock. FIE Swordplay is a great game that anyone can pick up and enjoy. If you have ever been curious about the sport of fencing, you should check this game out. Since the Olympics in Rio begin this weekend, you may want to check out this game, and then check out Fencing in the Olympics too. You may learn a thing or two to help you in the game.