[Updated] Forget About Brakes, You Don’t Need Them: PAKO is Coming to Android

Treemen Games has created what is absolutely, one of the most action-packed games, that is singularly focused and centered around driving. Forget about brakes, you don’t need them. PAKO is a Car Chase Simulator for Mobile Devices created by Treemen Games. The studio has three team members, and they are located in Helsinki, the capital and largest city of Finland.

Update October 23rd, 2014 9:57am PST: PAKO is now available on Google Play. You can snag a copy through the link below.

Everybody loves a good car chase in the movies. Some of the most popular car chases in movies include: Bullitt (1968) with Steve McQueen, The French Connection (1961), The Bourne Identity (2002), The Matrix Reloaded (2003) and one of my personal favorites, Smokey and the Bandit (1977). Who doesn’t love a classic black 1977 Pontiac Trans AM? Don’t worry, I didn’t forget, you can add any of The Fast and the Furious movies to the list too. There are many others, but what they all have in common, is sheer white-knuckled tension. You can remember the scenes, as the driver grasps the steering wheel, and narrowly escapes danger, from oncoming cars, while driving at high speeds. May I introduce you to PAKO, a Car Chase Simulator from Treemen Games, that will leave you challenged, joyful and a tad bit frustrated. How long will you be able to escape hordes of police cars trying to take you down? Well, the answer probably is, not too long. 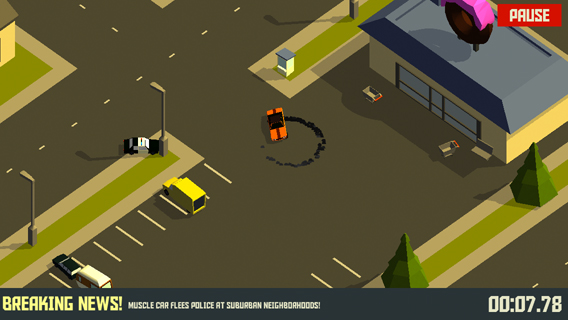 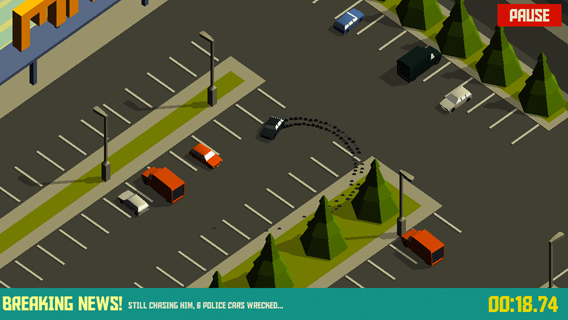 PAKO was released on iOS earlier this year. It has done extremely well in the App Store. The graphics are simple and colorful, with just the right amount of detail. There’s no need for a lot of flash, when all you really need are good driving skills. Those skills are first tested on a map simply called The Mall. What is the goal? Survive as long as you can while driving through a mall parking lot. Endless waves of police vehicles are chasing you. As you avoid them, some of them crash into each other or obstacles in the parking lot. What does that mean? It means that the level/map continues to evolve. Once the cars crash, they don’t disappear, they become part of the landscape. You will not be able to survive, based on memory of the parking lot layout alone.

The controls are as simple as ever. One button to turn left and one button to turn right. There isn’t any confusion with the controls whatsoever. You do have to learn the limits of what your vehicle is capable of, as it relates to drifting and its turning radius. Narrow escapes can be made when you know whether or not you can slide between a parked car, police car and a lamppost.  So far, I have lasted a minute and thirty-six seconds. I may be horrible at this game, because I am sure others have amassed much better times, but it doesn’t matter, because what it comes down to is this… PAKO is a blast to play. 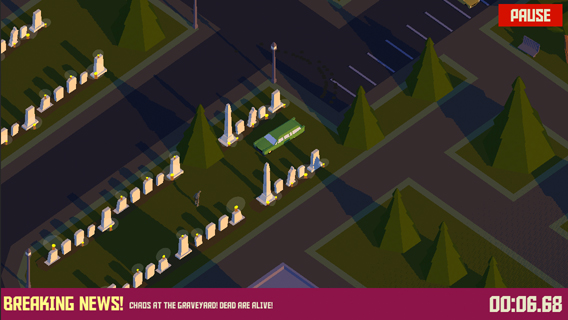 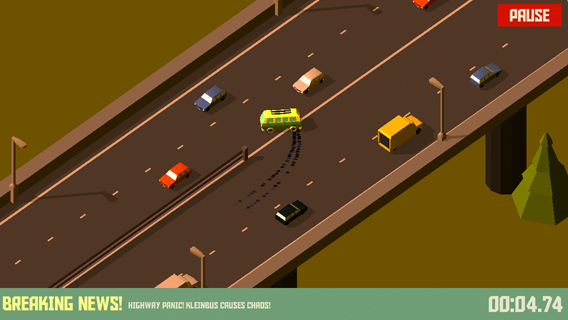 PAKO is a quick and fun game that shouldn’t be missed. The art style of the game is much appreciated, because though the graphics are clean and uncomplicated, you can tell a lot of thought went into the presentation, even down to the menus. The music sets the tone for the high chase, and having a variety of cars and maps, really help change up the game play and strategy.

When I loaded the preview build, it showed the game was integrated with Google Game Play Services. I got an achievement for lasting longer than thirty seconds. That should give you an indication of how tough the game can be in the beginning. Nevertheless, I wasn’t able to see the integration beyond the opening loading screen and the achievement appearing. You can access the leader boards which is important. How many achievements are there, I can’t say just yet. Maybe this will be worked out before the game is released this Thursday, October 23rd.

When the game was released on iOS, it was $1.99. Treemen Games is making this title free to play with ads. You can unlock the ads for just over $1.00. I chose to unlock the ads, and the game total was $1.27, very inexpensive for a game this fun. Especially since there aren’t any other in-app purchases. Treemen Games has told us there will be a three map update for free, but it will be released on iOS first, so quite a bit of gaming for your dollar. Look for PAKO to be available Thursday. When it hits the Play Store we will let you know.