Mad Catz MOJO Android game console review – Is it everything you could want in a micro-console?

We were one of the first sites to receive a Mad Catz Android-powered MOJO game console and since we received it we have been working on a review for this console, tossing everything at it that we could. We wanted to do an extensive review of this console, mainly because this one held the most promise of bringing the micro-console industry in Android to a new level. So how did the MOJO console fare against our rigorous review methods? Read on to find out traveler.

We’ve been covering MOJO news since it was announced that Mad Catz was developing the device. Since then we’ve seen it grow until the unit’s release and while the console was promising back then, when it got rooted it became even better in a lot of ways. This review will cover both the non-rooted and rooted version of MOJO.

The MOJO console doesn’t stray too far from any other console in terms of installing it and setting everything up. It is pretty much plug-and-play. Just plug your console in, attach the HDMI cable to the console and your TV or receiver (depending on your home entertainment set-up), power it on and you’re off. Just log in with your Google credentials so you can access your games and applications you’ve already purchased off of Google Play. 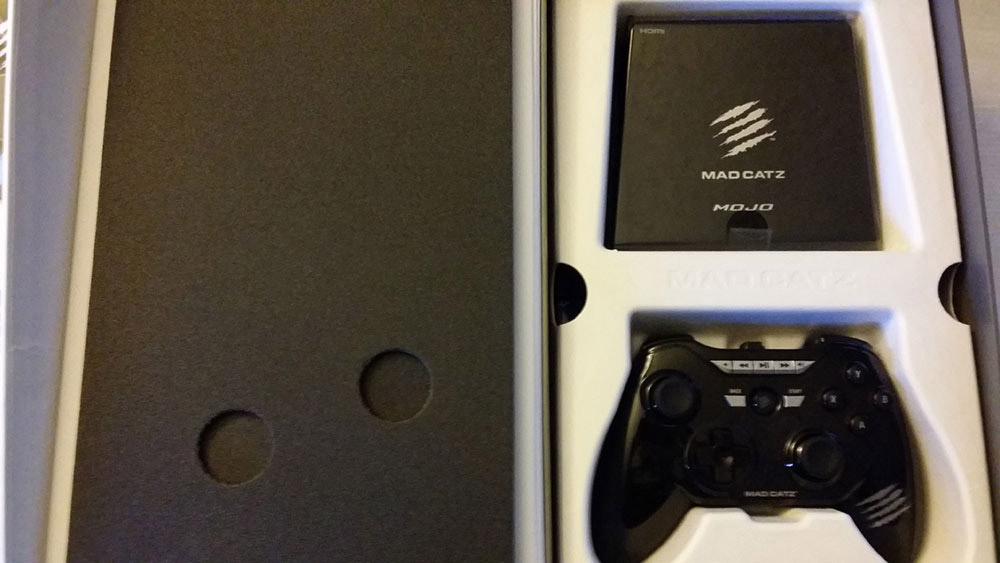 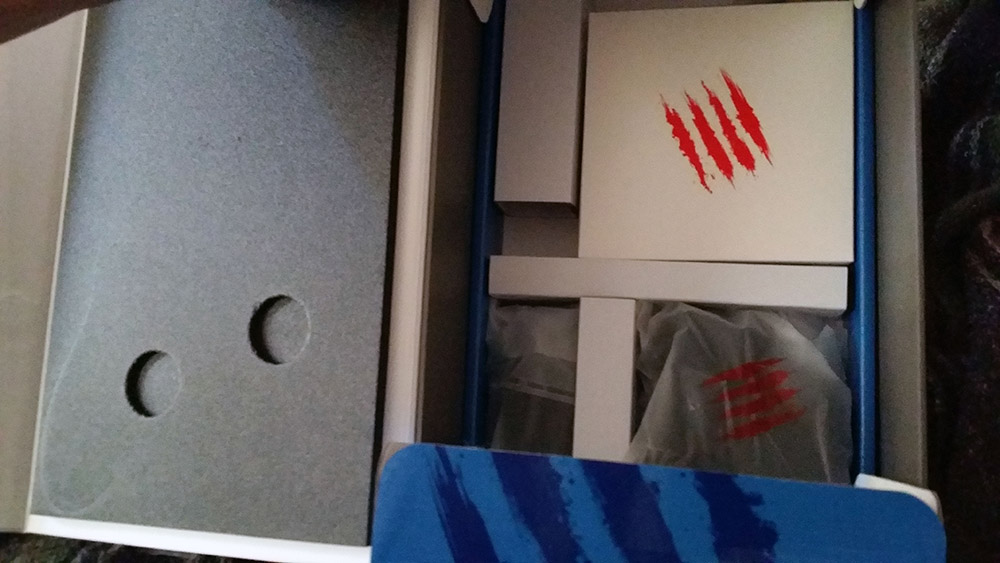 Depending on whether or not you have additional peripherals to use with the MOJO console, you may want to skip to the next section. If you have other peripherals, whether it be Mad Catz made or otherwise, this would be the time to sync them up via Bluetooth and/or by connecting them to the appropriate port. Since the MOJO run stock Android, this is done the same way you would do it with your Android phone or tablet.

Once that is all done, you’re off to play games, use apps, watch TV and movies through Google Play and listen to music, all through the console itself. We do recommend rooting it for additional fun but it isn’t mandatory at all.

As of right now the MOJO console offers the most recent hardware available out of all the micro-consoles available for Android gamers. This means it runs a Tegra 4 chipset which is backed by 2GB of RAM, 16GB of storage space (expandable through USB or MicroSD), the ability to connect online using either WiFi or a Ethernet connection, and all the appropriate ports you could need including both USB 2.0 and USB 3.0 ports. 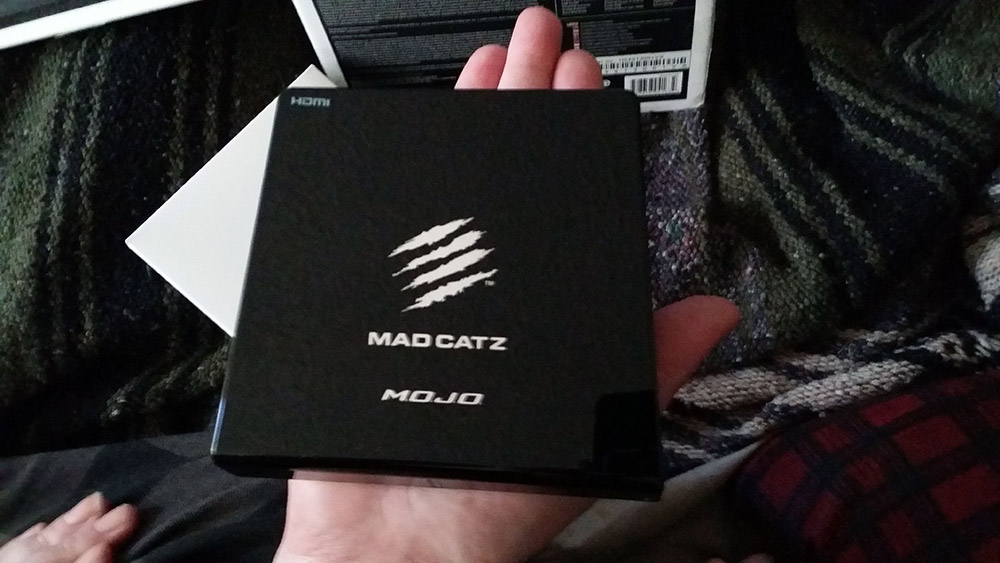 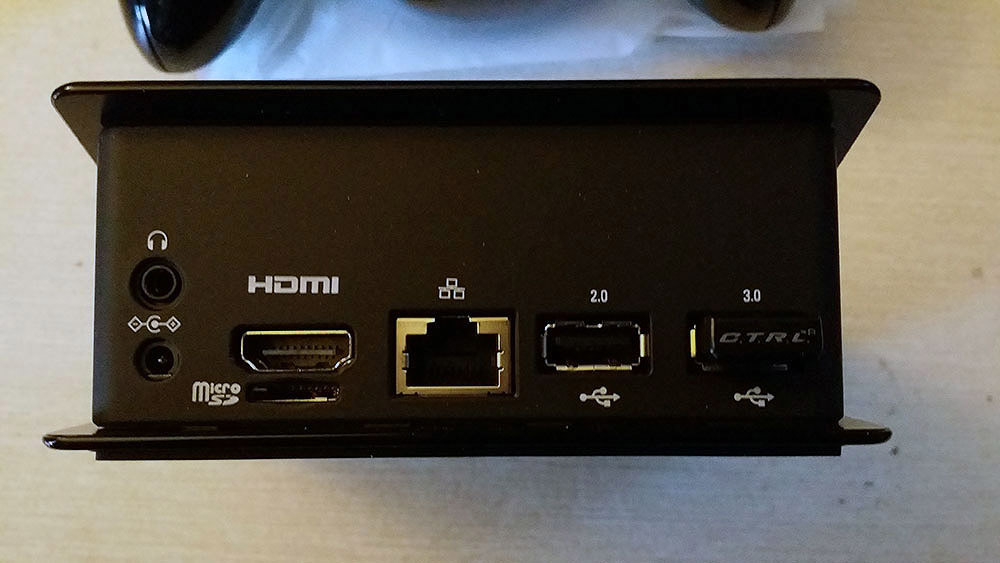 Top and back of the console

Software-wise, Mad Catz decided to stay stock with the Android OS, opting out of making a more custom UI version which a lot of OEMs tend to do such as Samsung or HTC. This allows for anyone who has owned any type of Android device to feel right at home with using the MOJO console. This means that you have access to any and all marketplaces including Google Play. So you won’t have to re-purchase any of your existing apps, games, music, movies and so on that you’ve already bought off of Google Play.

If you have been following the site recently and the MOJO news we have covered as of late, then you are probably aware of the fact that this console is also easily rooted. This opens up the console for even more possibilities including accessing everything on Google Play, even if it is restricted to certain types of Android devices, This is something every MOJO owner should consider doing if for now other reason than to access everything you’ve already purchased on Google Play. Nvidia’s TegraZone marketplace comes pre-loaded onto the console as well since it is a Tegra-based device.

The MOJO console allows for both wired and wireless peripheral connections. In our set-up we have the console itself along with the C.T.R.L.r game controller from Mad Catz that comes with the unit when you purchase one. We also have added a Mad Catz R.A.T.m gaming mouse, a S.T.R.I.K.E.7 gaming keyboard from Mad Catz, and a F.R.E.Q.5 gaming headset. While we will review each of these peripherals later in another article, this essentially makes the MOJO console an all-in-one entertainment solution. 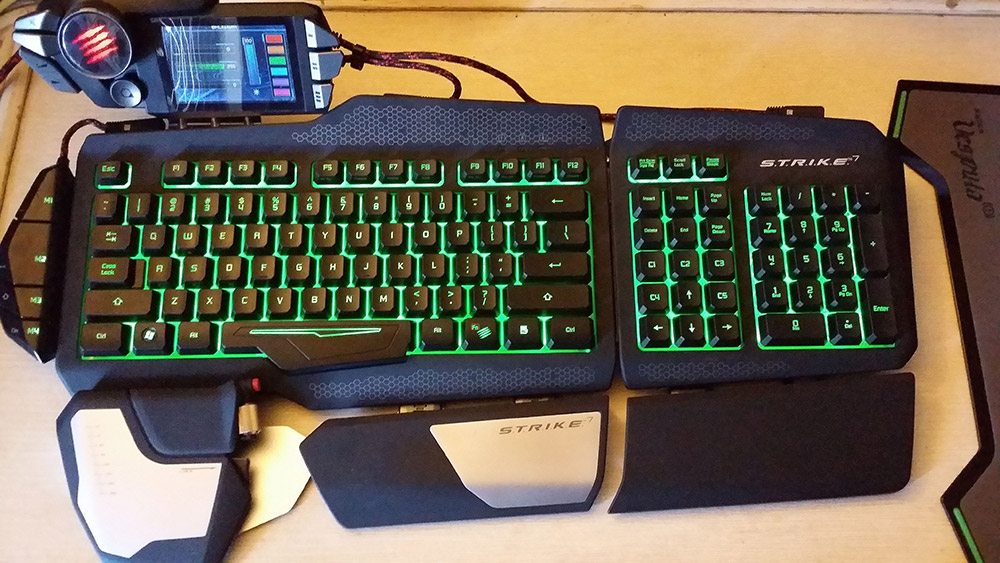 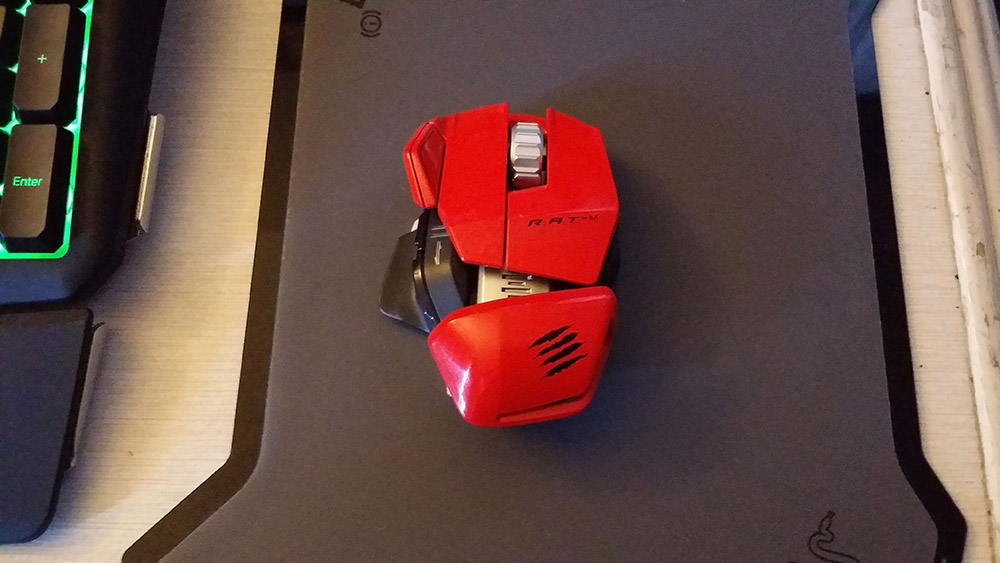 Mad Catz S.T.R.I.K.E.7 gaming keyboard and R.A.T.m gaming mouse that is connected to the MOJO

Everything works pretty much plug-and-play with no real additional setup required. While all of these peripherals feature Mad Catz GameSmart technology for mobile and console gaming, any wired, wireless or Bluetooth style peripheral will work with this console. This is largely due to the MOJO running stock Android 4.4.2.

Regardless of what peripherals you connect to the MOJO console, your main weapon for gaming will most likely end up being the C.T.R.L.r gamepad. This is especially true since the controller itself has different modes you can enable. These modes will let you use the C.T.R.L.r as a gamepad for controller supported games or you can pop it into Mouse Mode which will let you use it as a mouse. This is beneficial for playing games or using apps that require mostly touch screen controls. 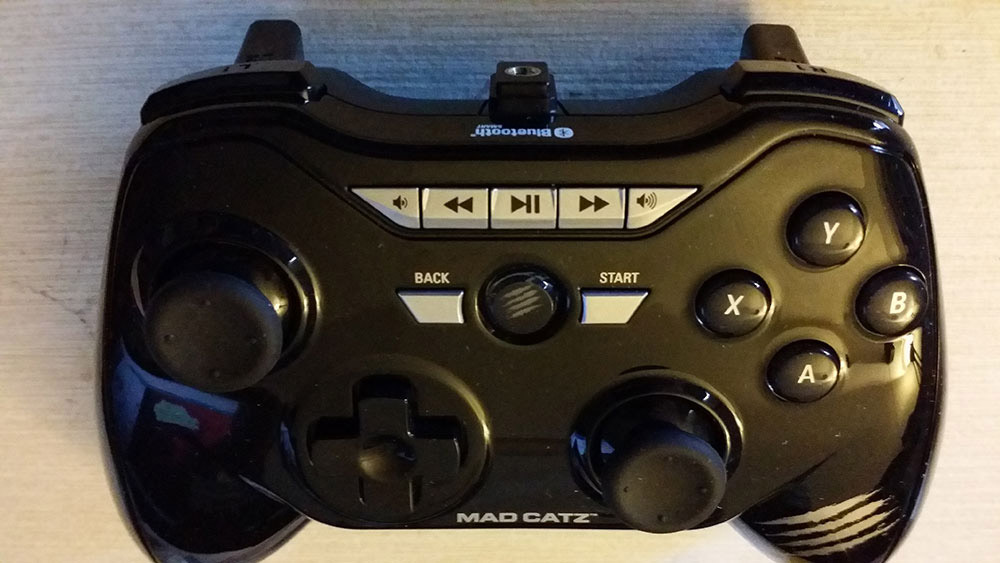 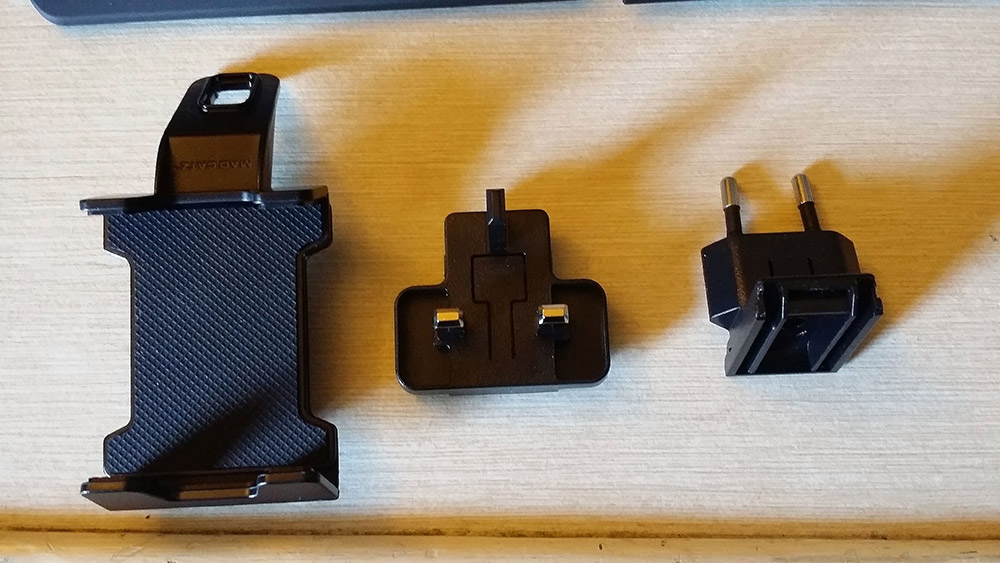 Controllers are a funny peripheral in that everyone has their preferences as to what they like in a controller. Some people don’t like Mad Catz controllers like the C.T.R.L.r while other people love them. The same is true for any company and the peripherals they release. When it comes the to C.T.R.L.r and the MOJO console, it does the job and quite well.

Rounding out all the goodies that come with the MOJO console are the additional plug adapters for use with plug sockets that are not the same style as they are here in North America. There also happens to be a Travel Clip so you can attach your phone to the controller and essentially have a MOGA-style of unit to play games on while you’re traveling. The Travel Clip will fit pretty much every Android phone size including the Galaxy Note 3.

It’s Not All About Gaming

While the MOJO console was developed for gaming, it is also available for other entertainment uses. You can watch movies and TV shows you’ve purchased, listen to music from Google Play or other services like Pandora, use any application you currently use on your Android devices, and even do work using the console. We used the console to write half this review by using the keyboard and mouse we mentioned earlier.

Netflix, Crunchyroll, Flixster, Flipboard, Dolphin Browser, and OfficeSuite Pro are just a few of the non-gaming applications that come pre-installed on the console. There is also all the social apps you could want installed like Twitter, Facebook, Instagram, Skype and so on. 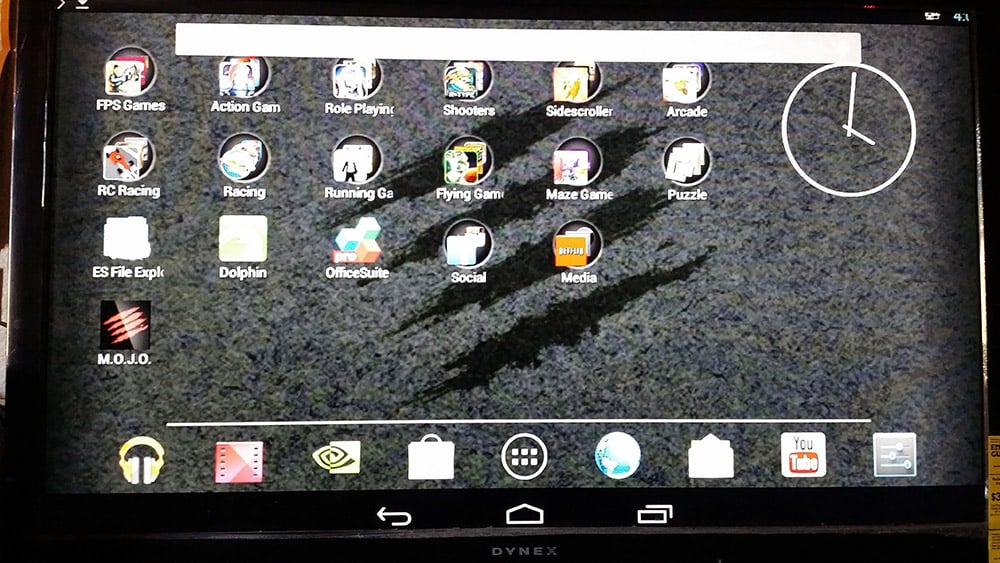 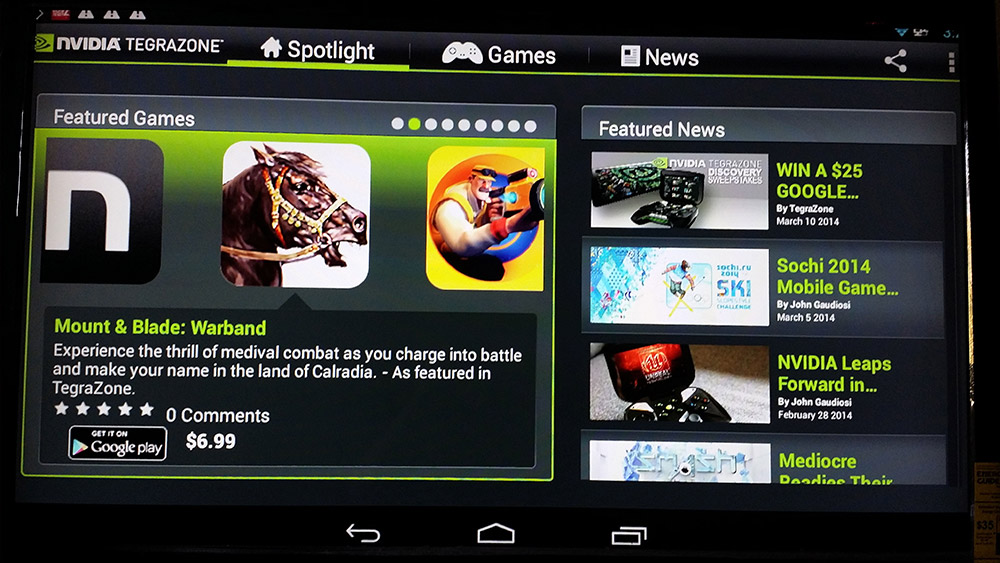 In The End It Really Is About Gaming

Even though we said it isn’t always about gaming, it really is about exactly that. You’re not buying this or any other console out on the market because it can run an app that lets you read and edit PDF files or do image editing (although it is a nice bonus). You’re buying one to play games on it. We threw everything at this console game-wise, from low resource needing games like Angry Birds to the most demanding games for Android we could find.

The result? Everything ran perfectly well. There was no lag involved, no performance issues, nadda. Hell the console boots up faster than a majority of Android phones availabale. There is a bit of a learning curve though when it comes to using the gamepad in mouse mode for games solely using touch controls. This isn’t because the controller is difficult to use or anything like that. It is mainly due to the fact you’re using a mouse to emulate what you would normally do on your Android phone or tablet with touch controls.

One thing to look forward to is Nvida’s GaneStream technology arriving onto the MOJO in the near future. This would enable you to stream your PC games to your console to play them on. This would also bring Nvidia’s GRID (the company’s cloud gaming service) to the console as well, allowing you to play even more PC games on the MOJO console (like the recently announced availability of Dead Island and Saints Row: The Third) but through the cloud. 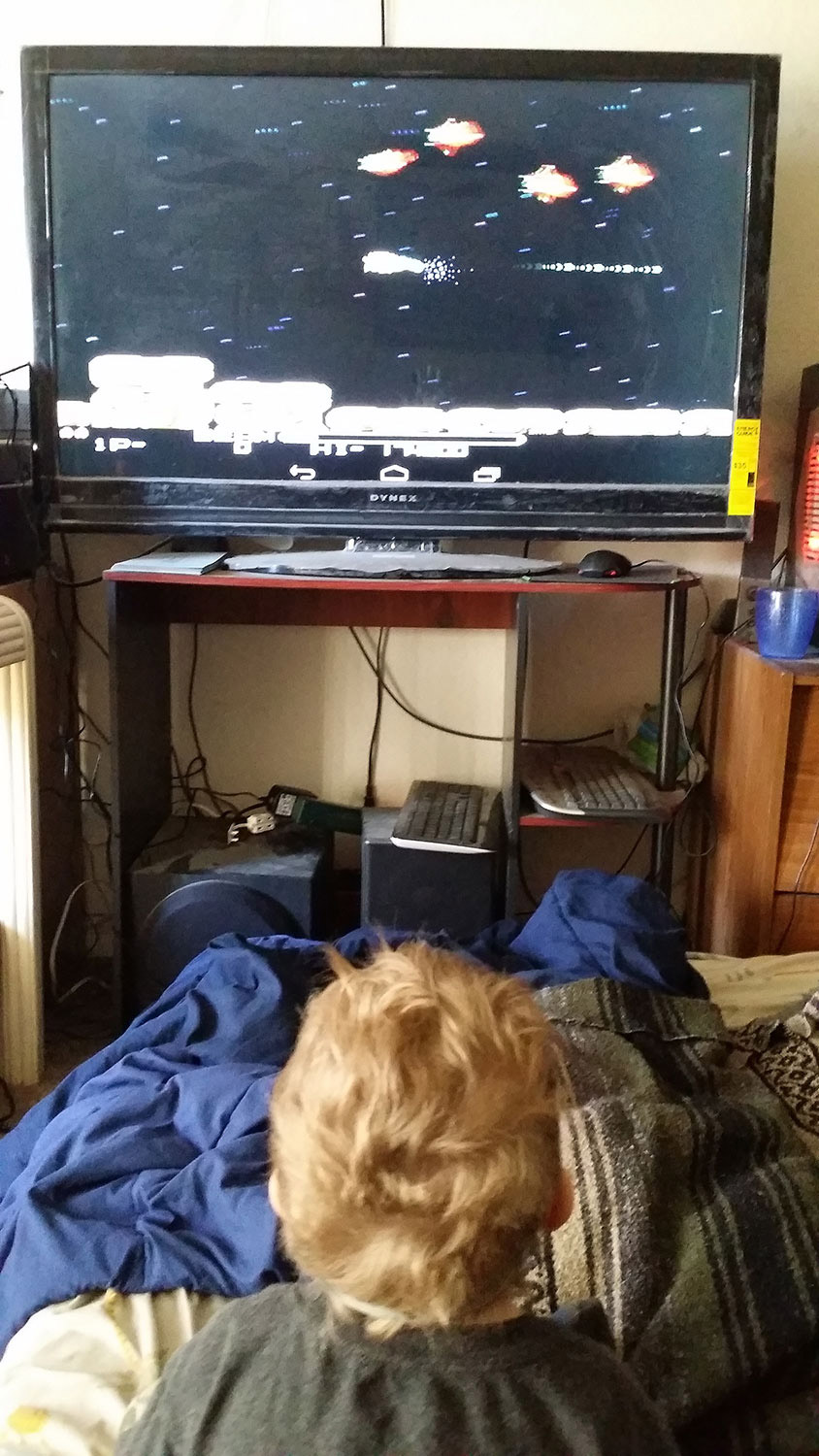 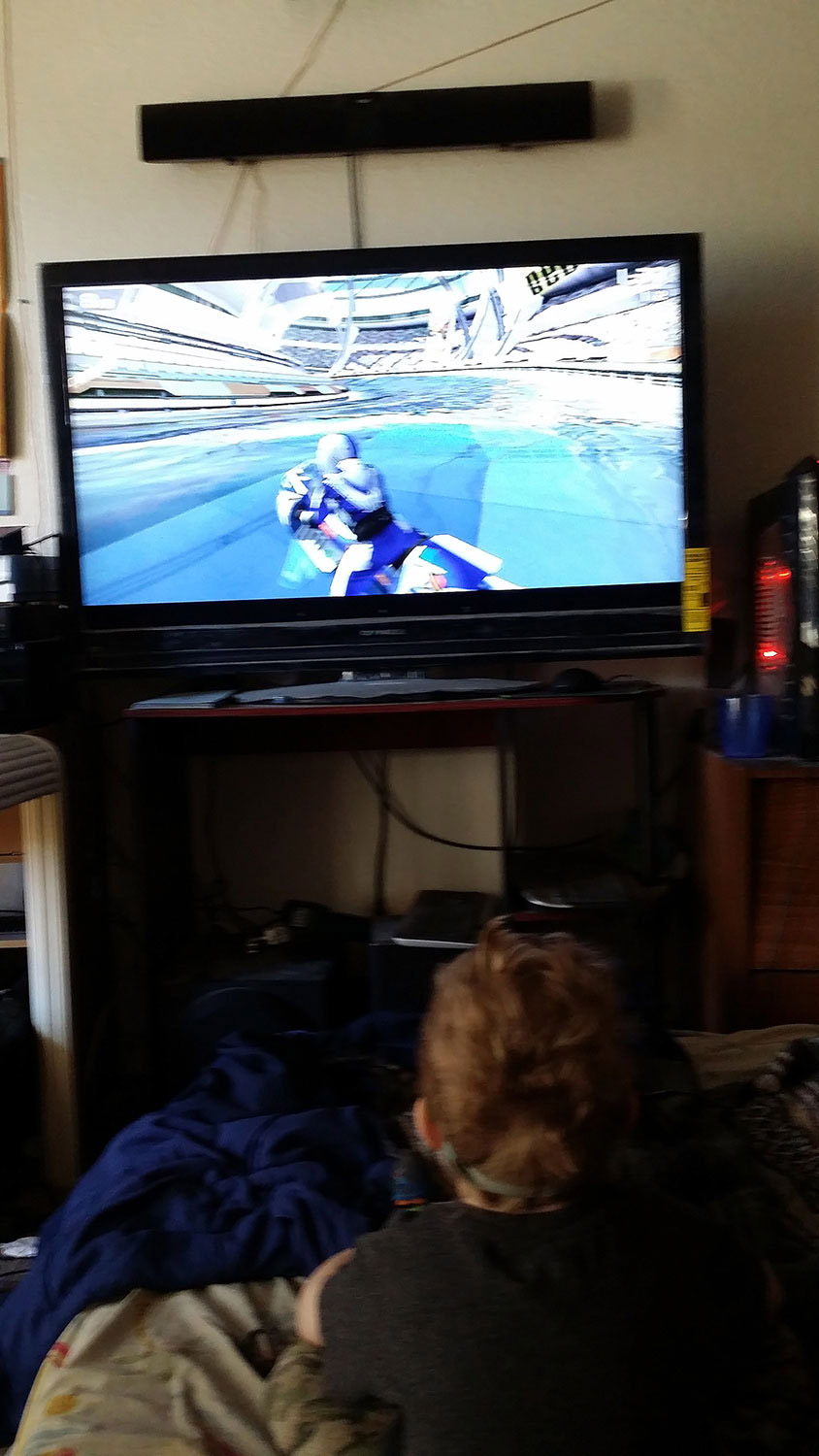 So What’s Wrong With The MOJO?

Usually if something sounds too good to be true, it usually is. Fortunately that isn’t the case here. There is very little wrong with the console at all. Anything we say here happens to be more of a ‘it would be nice if’ type of statement. For example, it would have been nice to see the console push a bit more outside of the box with its hardware. While it may be the best hardware out for a micro-console right now, it is actually on par with what most high-end Android phones and tablets come with.

Something else that would have been nice to see with the console’s release is some sort of built-in / includes software for game recording and live streaming. Everything now is about sharing your gaming experiences, whether that is live streaming on a service such as TwitchTV or just recording gameplay and sharing it with friends. This is something that all other major consoles like the Xbox One and PS4 have been adding. This is certainly something that can easily be fixed with a software update.

The Mad Catz MOJO console is a solidly built well performing micro-console that has the best hardware it could have for when it was built. Of course there is always the debate as to whether it should be a Tegra 4 or Snapdragon 800 inside powering it but either way it has top-notch hardware. Setting the console up and getting to play games fast is a definite bonus, mainly thanks to the console running stock Android instead of a custom version of Android. There is plenty of flexibility available with how you use the console – rooted or not.

With features like Nvidia’s GameStream technology on the horizon, this current iteration of the MOJO console has a pretty solid future ahead of it. While some people though $249 is a bit much for a micro-console, you have to realize that this isn’t an Ouya. You can do far more out of the box with the MOJO than you can with the Ouya, and we are not just talking about gaming either. With the price now set at $199 and the Ouya marketplace heading to MOJO, this is the best micro-console for Android.