Lifeline by 3 Minute Games, is an intriguing and interactive story. I wasn’t quite sure what to expect, but being familiar with the work of Dave Justus, writer of Fables:The Wolf Among Us, was enough for me to give it a chance. I’m glad I did. It is  the perfect reason to have notifications on your phone.

I met Taylor on a Saturday. Who is Taylor? Taylor is the main character in Lifeline. I have to admit, I didn’t really like him all that much in the beginning. He was a little bit sarcastic and whiny in my opinion. I am not the only one to feel this way. It seems Taylor’s attitude turned off a few people from enjoying the game. Knowing this should set the stage for you to realize what a brilliant and talented writer Dave Justus really is. If a writer can lure you in and tick you off, he has his/her hooks in you, and you are beholden to stay to learn about whatever is to follow. Buckle up, because with Lifeline, you are in for a good ride… albeit a brief one.

“Lifeline is a playable, branching story of survival against all odds. You will help Taylor make life or death decisions, and face the consequences together.” – 3 Minute Games 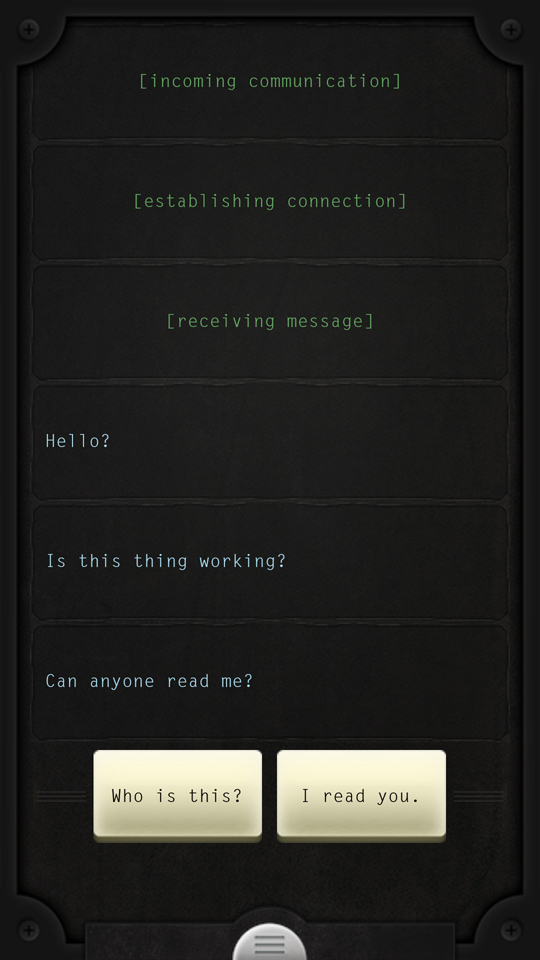 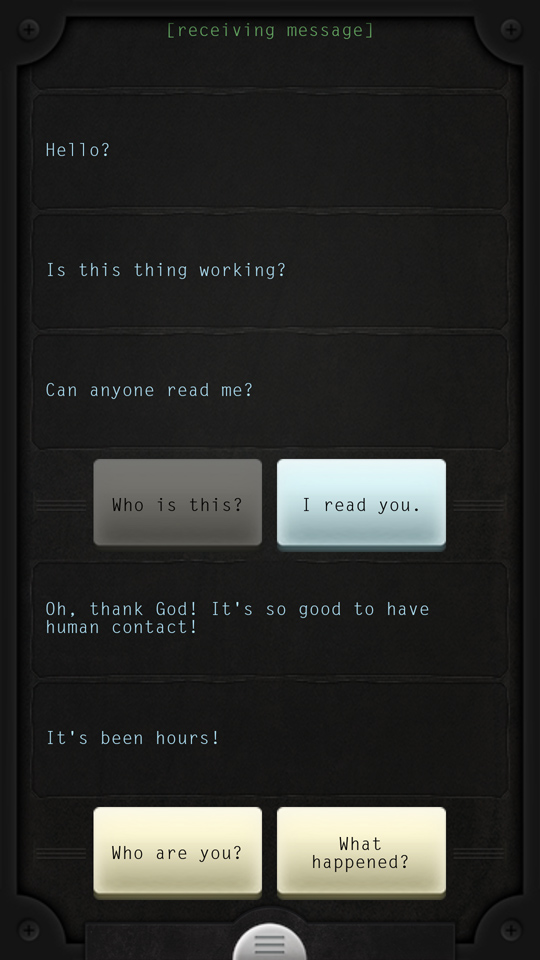 Don’t worry, there aren’t any spoilers in this review. Here is the setup for the story though. Taylor finds himself stuck on an alien moon after the ship he is on crashes. He is unaware of why the ship crashed, and has no idea where the rest of his crew mates are. So what would you do if you were in Taylor’s situation? You would be determined to survive, and try figure out what in the world is going on. That is where you come in dear gamer. It seems the only communication Taylor has with the outside world is you.

In what has to be one of the most successful blending of story, game and use of technology, your phone is the link to your communication with Taylor and his survival. It becomes pretty clear early on, that he is not going to survive without you. Strike one for Dave Justus. He throws the perfect pitch, by making you care about what happens to Taylor. Taylor honestly wants your opinion on what is taking place around him. How is it done? A good story that relies on your choices and recommendations. They will have an immediate impact on what Taylor does.

As I mentioned earlier, I met Taylor on a Saturday. We briefly got to know one another, and though he rubbed me the wrong way at times, I began to care about his predicament. Lifeline’s story is displayed as text only on your screen. The backdrop is a charcoal grey with green text. It reads as a digital communicator of sorts. There are no pictures here folks. The strength of the story is based on clever writing and your imagination. I am a very imaginative person, so I could see it all. After the first few lines of text, Taylor presented me with a question. I had to think about it and respond. Then the worst thing happened, the next line of text was… “Taylor is busy.”

You may as well get used to seeing that because after you help Taylor make a decision, he works it out in real time, or that is what you are led to believe. If you tell Taylor he should check something out. He says okay and says give me a minute. Through notifications on your phone, Taylor will get back in touch with you when a task is done, or after he sees something, or after he has gotten some sleep. Initially it didn’t bother me too much, but by Monday, I was checking my phone to see if Taylor had tried to communicate with me. If he had, there would be a notification on my phone saying, “Taylor is waiting on you.”

I have to admit, Taylor did not live long our first time through. I made a bad decision. I guess I thought the dude was tougher than he was. No, I’m just joking. Though the game is fairly linear, there are some difficult decisions to make. That is part of what makes this game so compelling and quite suspenseful. 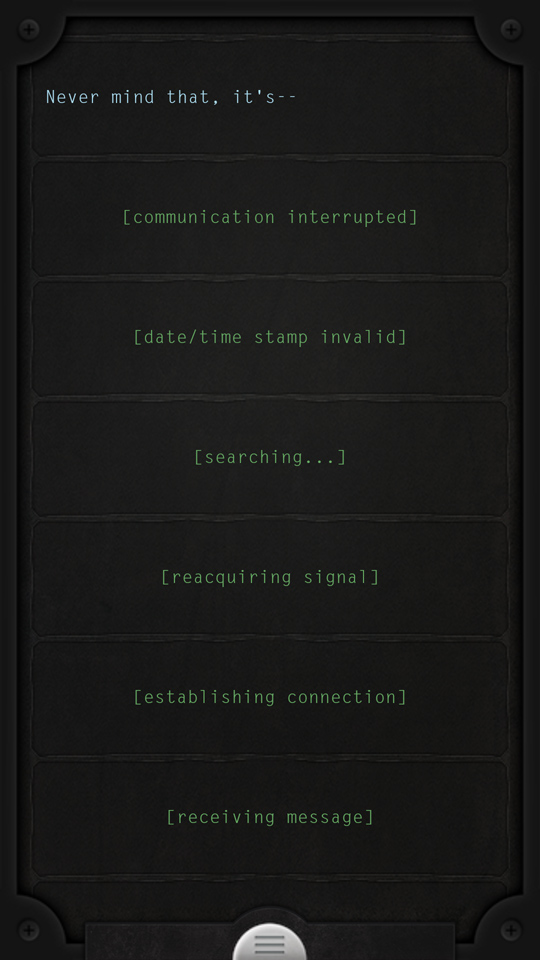 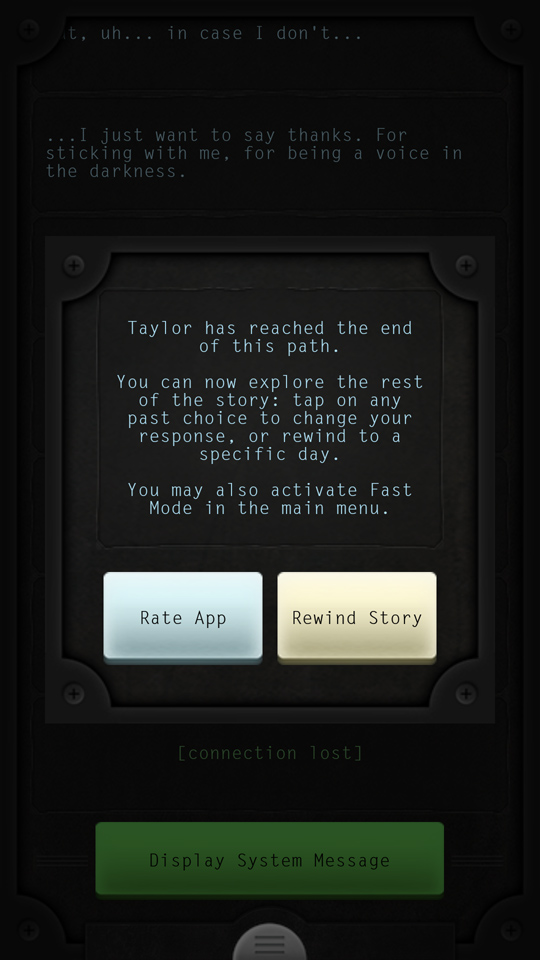 A lot of people want to know how long the game is. A lot of that depends on how tethered you are to your phone, and how quickly you respond to Taylor when he tries to communicate with you. I started Saturday, met an untimely end, and then was successful about mid-day on Wednesday. You will probably complete it faster than that. You can have your notifications bundled together, or have them sent separately. You can change that at any time during the game, if the notifications become to much. At one point I really felt like I needed to answer Taylor, but work was calling, so he had to wait a bit. He kept reminding me that he was waiting on me. Nevertheless, I loved the integration with the game, story and using my phone. It worked well, and it was perfect for on-the-go gaming.

Lifeline is available to download for $2.99. At the time of this review, you can catch it on sale for $.99 Is the game worth $2.99? I absolutely think so. You may view it differently. It depends on how you value your entertainment. As a writer, I know good stories take time to craft. Not to mention the programming aspect of the game, no matter how big or small. It took a team to create the game. At $.99 the game is a steal. If you are on the fence about it for $2.99, hop down and purchase it while it is on sale.

Hopefully 3 Minute Games and Dave Justus will team up for more adventures. What is missing in the game? Not much in my opinion. Considering the story, it would be nice to have achievements. Taylor does achieve some pretty herculean feats in my opinion. A little back story would be nice, but in this case it adds to the suspense. There is also a fast track method you can use once you have played through the game. It helps to by pass some parts of the game where you know you are going to be waiting.

I wouldn’t mind a full series of these types of games. Congratulations to Dave Justus and 3 Minute Games for breaking away from the pack, and creating an enjoyable game through the written word. Like I said, no spoilers here. I helped Taylor get through his ordeal. Can you?