Could Nvidia be unveiling a GRID-centric device at GDC 2015? A set-top box perhaps?

Nvidia is gearing up for a big announcement at their pres event during the upcoming GDC 2015 and while no one truly knows what the company plans to unveil, besides Nvidia themselves, a lot of talk is happening about what the possible things the announcement could be. One of the more interesting ideas, and something mentioned in the comments in our previous article about the upcoming event, is a set-top box. However this idea we’ve been reading about goes further than that, making the set-top box be geared towards Nvidia’s GRID gaming on demand service.

The idea, which we originally read over at TechCrunch, is that Nvidia is getting ready to really push their game streaming service GRID and one of the best ways to do this would be to put a box on as many TVs as possible. Right now Nvidia’s GRID is available to only those people who own a Shiel brand device, whether that be the tablet or the portable gaming system, but to bring the service to the masses, a set-top box running Android (we are assuming it would run Android due to the amount of invites for the press event that went out to Android news websites like ours) that has a main purpose of running GRID to the big screen would be a logical way to go. TechCrunch brings up a good point, Nvidia is pushing their GRID service pretty hard already, adding games to it every Tuesday which we end up reporting on each week. 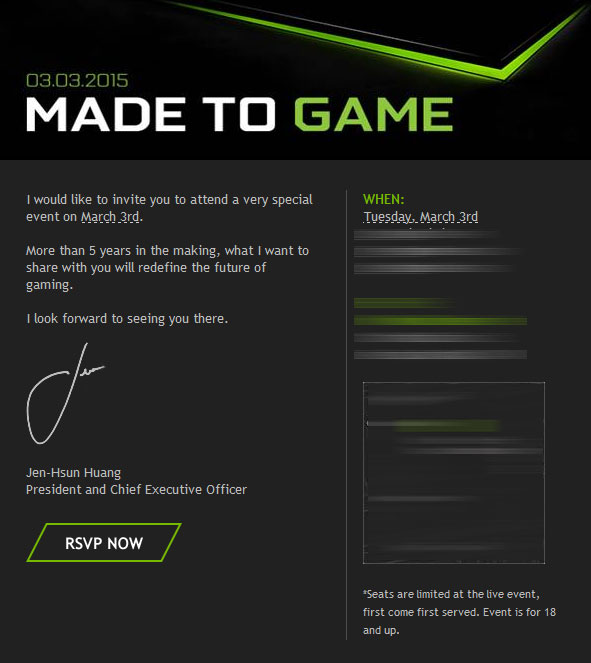 Nvidia has given some hints about what the announcement will be at GDC 2015, stating in the invite that this is 5 years in the making and could change the gaming industry in a way never before seen. Previous services that offered on-demand game streaming, such as OnLive, stayed locked as a software-based service, never branching out to have its own hardware to offer consumers. Instead they relied on other hardware from other companies and the hopes that people would install OnLive onto that hardware. This would essentially make Nvidia’s GRID set-top box a first. However it may be this “5 years in the making” hint that debunks the whole set-top box idea as we are pretty confident we would have heard something in all of that time in regards to a device like this being developed.

Of course it may not be a set-top box at all but instead it could be Nvidia opening up GRID to non-Shield branded devices, which could be other Android phones / tablets or PCs or both. One thing is for certain though, the announcement will be more than just a new iteration of either the Shield Portable or the Shield Tablet. It will include the new Tegra K1 chipset, Android, and Nvidia services. How this translates in the announcement remains to be seen but we only have a few weeks left to wait.

What do you think? Is a GRID-centric set-top box or micro-console a pretty good possibility for Nvidia to announce at GDC 2015? Or are we still hoping it will be something else like a new Shield Portable or tablet? It’s been about 4 years since the Xperia Play was originally announced, could we end up seeing a new gaming Android phone but this time coming from Nvidia? Let us know in the comments below!