With that said, if you want to check out the interview and all the details about the game, definitely hit up our previous coverage of Call of Champions. However, we will do a quick recap as to what this game is because it isn’t a typical MOBA in some ways. Essentially this is a 3v3 MOBA with two lane maps and a center area which can change depending on the map you are playing on. It can be a maze, a focal point for team buffs, and more. 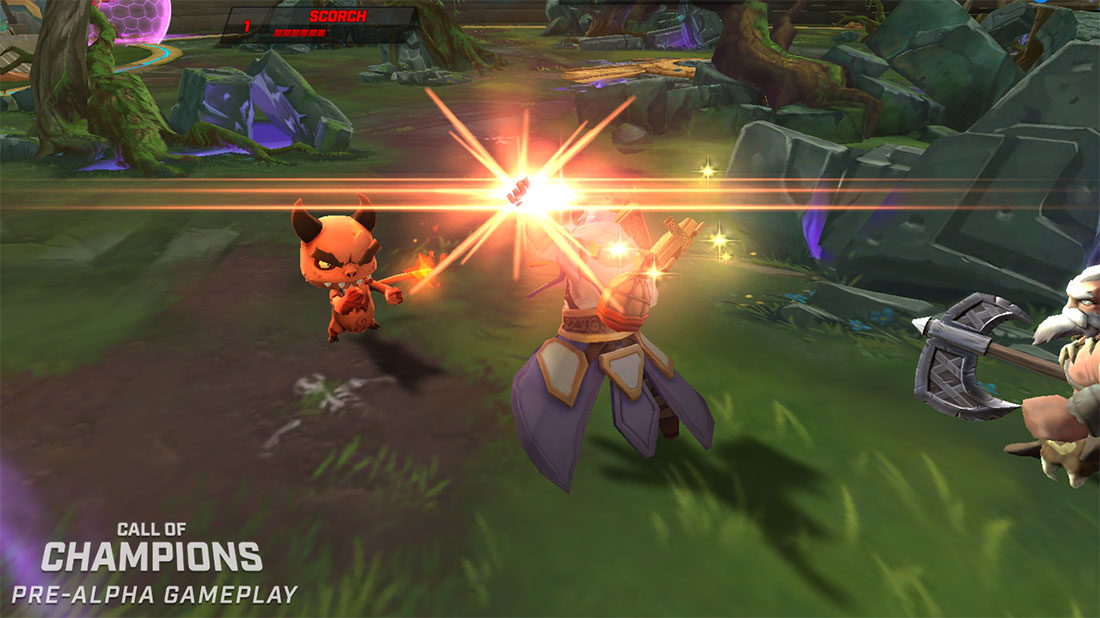 Spacetime Studio went into making this game specifically for mobile gamers and while your typical MOBA setup can work just fine on a mobile devices, matches can take too long. So Spacetime Studios broke down what a MOBA is and rebuilt it from the ground up into something that is a lot more fast-paced, with matches lasting 5 minutes. Characters start off with all abilities unlocked so you only have to be concerned with battling the other team, pushing the Orb of Death, and not dying yourself. Each character has a total of 5 abilities they can unleash onto their enemies, and champions have their own elemental alignments, strengths and weaknesses.

Matches contain no minions at all but there are towers. The Orb of Death, which is an orb located in either lane on the map you’re playing on, is essential to the game. Towers deal huge damage to enemies so in order to mitigate that damage, making it a lot less, you have to push the orb close to the tower you are looking to take down. Pushing the orb consists of just standing near it. The more team members that are close to it, the faster it moves. However, the same goes for your enemies as well. 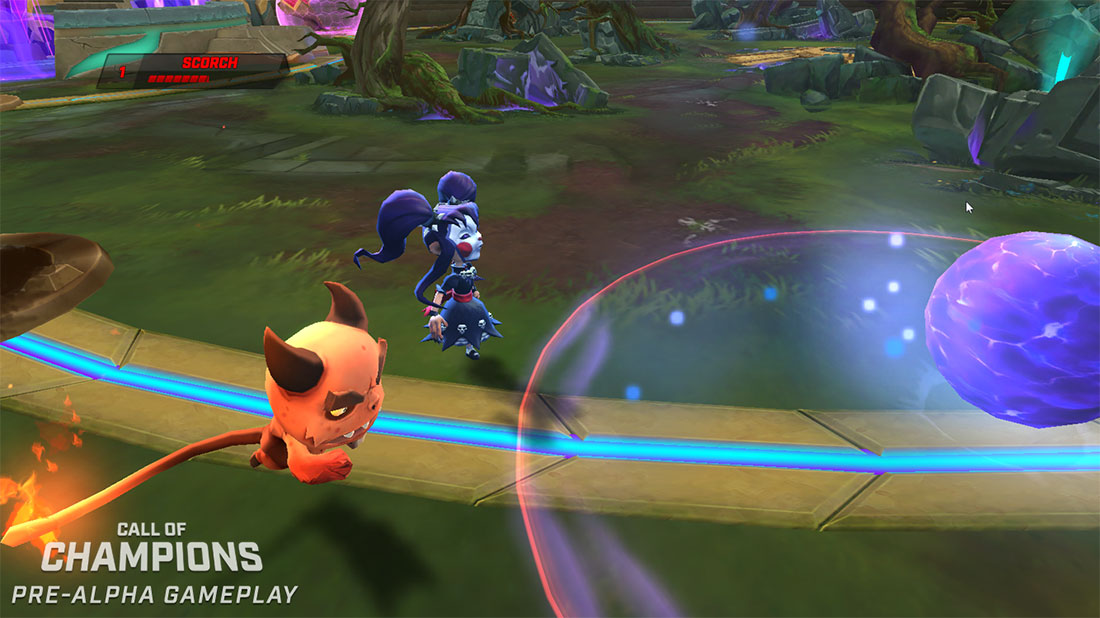 Winning a match is done by destroying the enemy team’s base. If the time runs out and no bases are destroyed then winning is based off of which team destroyed the most towers. If that is tied then it is based off of damage dealt. Upgrading abilities, of which each character has 10 tiers available, and leveling up characters is done between matches. That way the entire game is focused on combat and winning, making it a very fast-paced and intense game regardless as to whether you’re playing a ranked match or practicing against AI opponents.

Alright so maybe that wasn’t the shortest recap on the planet but there is even more to the game than what we mentioned here including all of the broadcasting, spectating, eSports features. For all of that, check out our interview with Spacetime Studios. So does the game actually play out like it is described? In one word, yes. 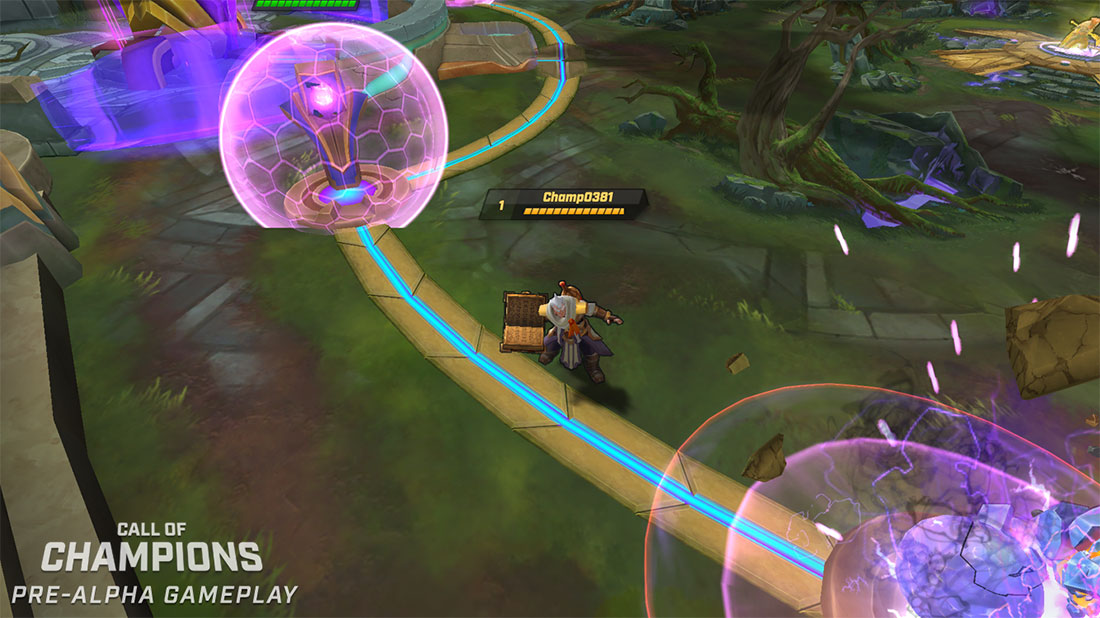 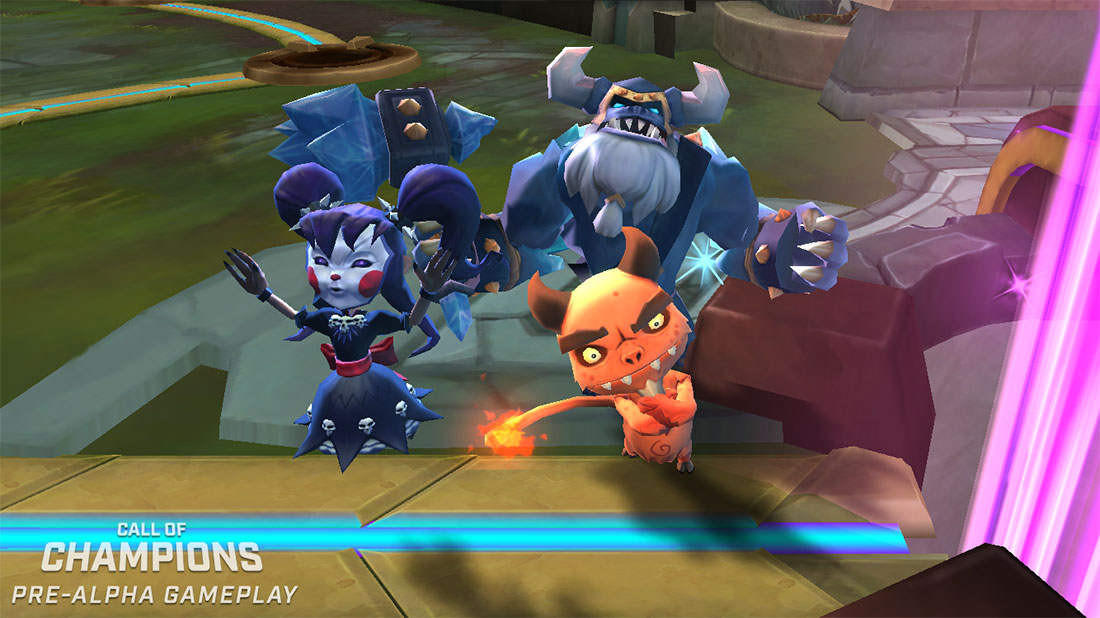 While playing a few matches against AI opponents, who were actually quite difficult to go up against, I found the game to be quite intense. Having to not worry about minion farming, porting back to base for upgrades and skill points, and other activities that take you away from the combat in a typical MOBA, actually speeds the game up immensely. Since each champion has mass, you can bump smaller ones around which actually can be very advantageous. Big champions are slower of course but can ‘bump’ the smaller, faster ones around. Abilities match their characters too. Smaller, more agile, characters have multi-directional attacks (jumping into the air and coming down, AoE attacks, dash attacks, etc etc). This adds to the chaotic, but fun, action going on when people are fighting each other.

Visually, Call of Champions looks good. Each character has their own back story and look quite good. The animation of both the characters and abilities being cast are very smooth as well. This all wraps up together to make for very fluid gameplay and teamwork is key in this game, especially due to the short time period a match has. Moving into the center and managing to stay there uninterrupted for 5 seconds will give your entire team a short buff of one type or another (attack, defense, etc).

The spectating, eSports, and broadcasting features add a new level to this game as well if you look at it as a competitive title. Everything is set up for it and it all functions very nicely, even allowing you to zoom right into a specific character or spot to watch the action in real-time, or rewind it to review the action that went on. 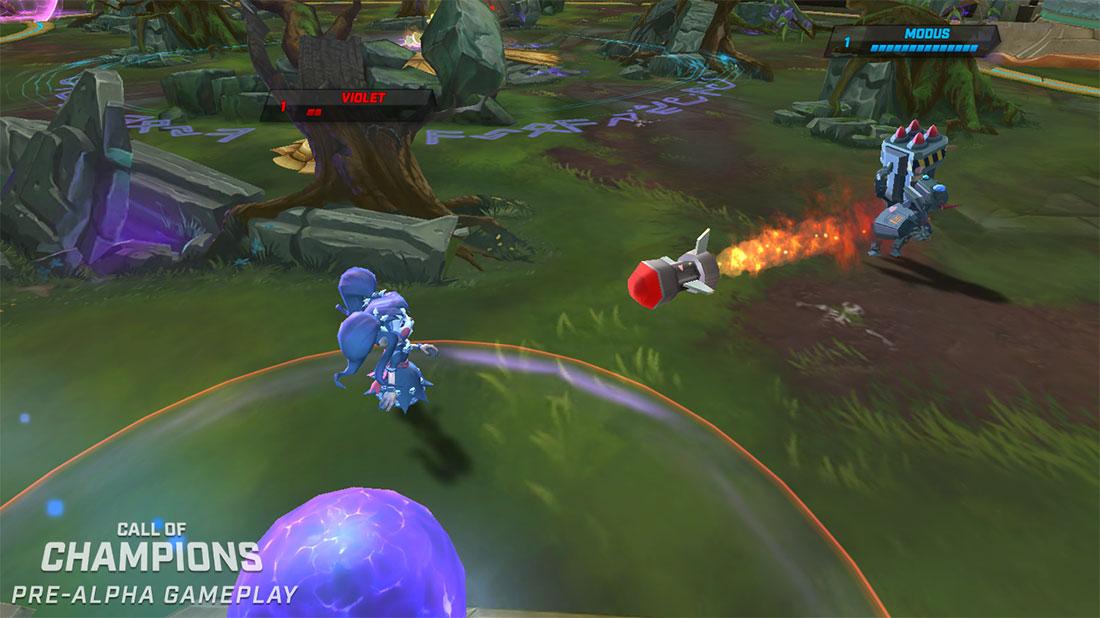 Everyone is probably wondering about the in-app purchases and we have news on that as well. This is a MOBA so there can’t be any sort of pay-to-win or advantage available. We thought that the IAPs would be for variant looks of characters. It actually isn’t. Instead the only IAPs that will be available will be for boosting XP to leveling your character up to max level faster. Since matchmaking is based off of people around your current Champion’s level, this doesn’t give anyone an advantage if they put money into the game. All it does is make your favorite champions reach their max level faster.

Walking away from Call of Champions was a bit hard. The game is really fun and that was just against some AI opponents. Playing against other people should be even better. Spacetime Studios is looking to have a beta going shortly, and from there the company would like to have the game out and in your hands by the end of Q2 2015.