As with last years leaked road map for nVidia chipsets, this new one shows off a couple of new chips we have yet to hear about. In this new roadmap, which shows upcoming codenames for future chips coming in 2012/2013, we get to meet two new members of the family, Kal-El+ and Wayne.

Since we already know that Kal-El will be a quad-core chipset which is already slated to come out in tablet form later this year while phones sporting Kal-El are looking at an early 2012 release time frame, Kal-El+ hints at a beefier version of the Kal-El quad-core chipset. Judging from where Kal-El+ is located on the road map, we are guessing it will start making an appearance in mid-to-late 2012. 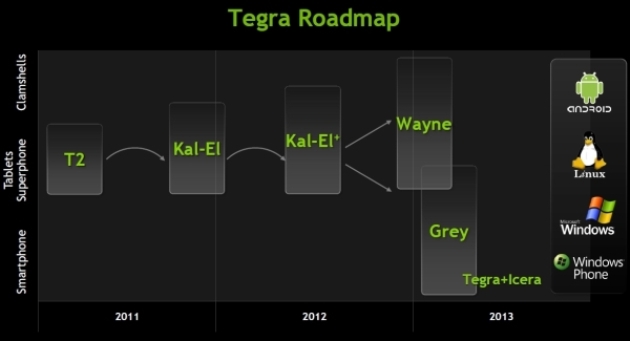 Wayne, on the other hand, we know nothing about. Will it be a much faster quad-core than Kal-El+? Perhaps it’ll have more cores that Kal-El? As of right now that is all up in the air for speculation but what we do know is that with previous leaked road maps and chips in those road maps, the power they usually provide in terms of performance is always becoming more of a jump than previous ones. Kal-El is supposed to be 5-7 times faster than Tegra 2 and there was talk of a future chipset awhile back that would be 75x faster than Tegra 2. Would that be Kal-El+ or Wayne?

For those of you curious about Grey, this chip will be geared towards more basic smartphones while Kal-El+ and Wayne are focused more on Superphones and tablets.