Before getting into this we aren’t hear to discredit the source who tipped off Engadget about this. In fact we just wanted the low-down on this phone being developed by Sony Ericsson according to the source. Since the report, no further information has been brought to the table about it and while we don’t have a bunch of insider connections at Sony Ericsson, we did relentlessly bug a few people.

Finally getting a hold of the Executive Escalations Manager over at Sony Ericsson we got a bit more information regarding this little gem of a device that has us all worked up. After a week of bugging people and waiting for responses, the Executive Escalations Manager was willing to help us and did some digging of his own. This is what he returned with: 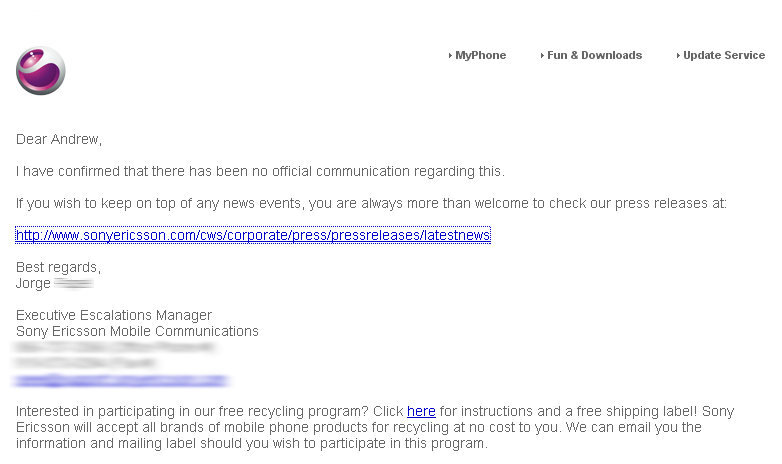 What does this mean? One of two things, either this PSP GO-like phone was complete rumor and is not actually being worked on and as such was literally just a wet dream for all of us or that the company is being very tight lipped about it right now. It could be either judging from how my conversation has gone with the Executive Escalations Manager as originally he had no idea about it at all but then came back with such a clean answer.

A few things to consider as well. Google has stated the Gingerbread would be out late this year now granted October is fairly late in the year but they were more looking at a November/December release date at the earliest. Secondly being half way through August already, having this leak out this late seems a bit unusual as, following the history of Android leaks, we usually hear about possible phones months in advance.

On the flip side Engadget just reported that Sony is taking aim at iPhone gaming with a new ad for the PSP so what better way to really take a chunk out of the iPhone by making an Android gaming PSP GO-like phone?

Are we going to stop digging now that we have this answer? Not for a second! We want to be able to confirm it 100% either way. What does everyone else think? Sony Ericsson keeping it under wraps ‘officially’ right now or is this just a rumor to get us all worked up? We still have our fingers crossed and are still waiting to hear back on some more information about this.