Angry Birds Star Wars gets yet another video, this time with Han Solo and Chewbacca

If you haven’t had enough Angry Birds Star Wars videos to watch, whether it be the earlier promotional videos with scenes from the actual movies or the new gameplay videos Rovio has been releasing steadily, then you’re in luck as today Rovio has released yet another Angry Birds Star Wars video. This time we get to see Han Solo and Chewbacca in action. At this rate we won’t need to play the game because we will have seen everything in all the videos Rovio has been releasing.

Angry Birds Star Wars gets a new gameplay trailer, this time with C-3PO and R2-D2

Time for some more Star Wars news but this time it is about the upcoming Rovio Angry Birds/Star Wars crossover, appropriately named Angry Birds Star Wars. Rovio is continuing their onslaught of teaser videos and trailers and today we get a new gameplay trailer that features R2-D2 and C-3PO birds. The last video, in case you missed it, featured Luke and Leia.

Rovio gave warning a couple of hours ago on Twitter that they would be showing off the first in-game footage for their upcoming Star Wars / Angry Birds crossover game, appropriately named Angry Birds Star Wars. While Rovio has pumped out a video or two a week for the past few weeks since they announced the game, none of them have actually shown anything about the game. Now we get to see actual gameplay footage.

There is a new cross-over that will be coming to the world of Angry Birds and will completely themed around Star Wars. This morning the official announcement event will be happening in Time Square over in New York at 10am EST but we’ve already learned more about this new game along with when it will be arriving and yes, it will be a whole new game. Think of Angry Birds Rio but instead with Star Wars. 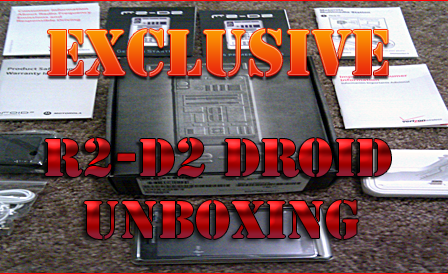 Just a few moments ago the nice UPS man came knocking on my door. Upon opening this box (I was slightly confused as I wasn’t expecting anything) I was shocked to see one of the Limited Edition R2D2 Droids sitting inside. After staring at it for about 10 minutes in awe and surprise I did what any normal Android fanatic would do, grabbed my camera and unboxed it!