Starting off the day fresh with news about the Playstation Android phone that will be coming our way soon. According to Pocket-lint’s source, Sony Ericsson will not be showing the gaming device at CES 2011 but instead will be using the Mobile World Conference in February for the official launch with units being available in April.

We sort of had an idea this would happen though from our previous reports on this device getting a MWC 2011 showing. This isn’t a rumored device anymore thanks to all the video leaks and people from LG, executives, basically coming out and saying it exists without actually saying it. Got to love the games companies play.

Of course we also have to take into consideration the fact this confirmation, although leaked, comes right after the announcement of the Playstation app for Android. While the app is also going to be available for iOS, there is no reason the Android version can not have a section added for the Playstation phone.

That is not all though, Engadget is reporting that Sony Ericsson has also registered 4 new trademarks. This could mean that “Z1” and “Zeus” were just the codenames for the project. It has also been stated that Zeus is the name of the overlay on the Android OS for playing the Playstation games on. The new names could be the “Xperia Play”, “Xperia Arc”, “Xperia Duo”, and the “Xperia Neo”. Xperia Arc sounds the best out of all of them, god forbid if they go with Xperia Play.

Let’s just hope the benchmarks leaked earlier are a lot better in April.

Update Dec. 21st, 2010 3:00pm: So we did a bit of investigating to see which name Sony Ericsson would be choosing and we think we have managed to solve that mystery, well, hopefully. Checking out the domains Xperiaplay.com, Xperiaduo.com, XperiaNeo.com and XperiaArc.com turned up interesting results.

Xperianeo.com – for sale by the same guy as Xperiaduo. Got to love domain sitters.

Upon further digging we came up with some interesting information. Both Loopia and Jung Relations are based in Stockholm. Sony Ericsson, well the Ericsson company, is originally from Sweden. The R&D Department is in Lund, Sweden. Great, everyone knows Sony Ericsson is a Swedish company correct? If you didn’t, now you do. 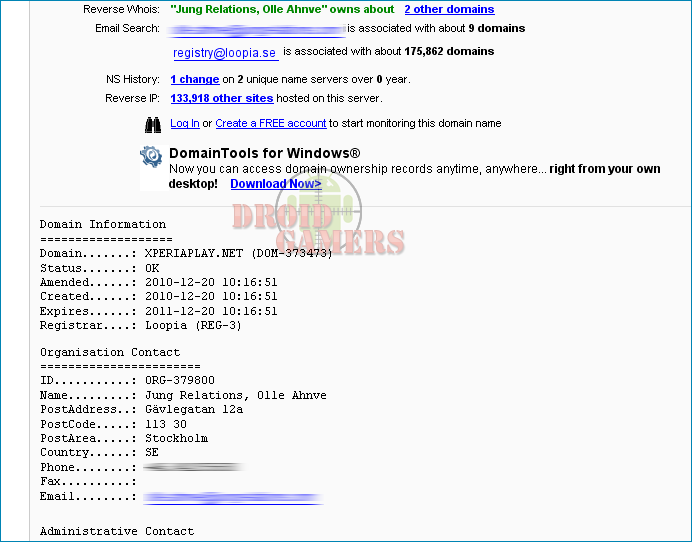 Jung Relations is a ‘curious communications company’ specializing in concepts, PR and more. They have partners in Denmark, Finland and Norway. They have a wide variety of clients all over the place when it comes to consumer goods including electronics. One of their major client? Sony Ericsson. The XperiaPlay domain for com/net/info are all registered to Jung Relations.

So it seems the name will probably be Xperia Play unless this is all just to throw everyone off and it’ll be named something completely different. Wouldn’t surprise us. It looks like the Xperia Arc, Xperia Duo and Xperia Neo might be some other Sony Ericsson products coming our way.

On a more humorous note, the XperiaDuo and XperiaNeo domains were registered today by the same person to sell. Someone must read one of the sites that reported on those possible names.