It isn’t a whole lot longer, roughly 30 seconds more, but the whole dark, eerie sweatshop theme in some unknown Asian country is still bothersome. We are glad they aired it! Also note that there is an official Facebook page for the Xperia Play, seen at the end of the commercial.

Also a countdown ad is now out basically confirming that the Xperia Play will be officially announced at MWC 2011. Not like we didn’t already know this, especially after leaked photos of the booth they will be displayed out surfaced last week as well. Those booths were sporting T-Mobile logos as well so hopefully we will see it land on T-Mobile here in the US. 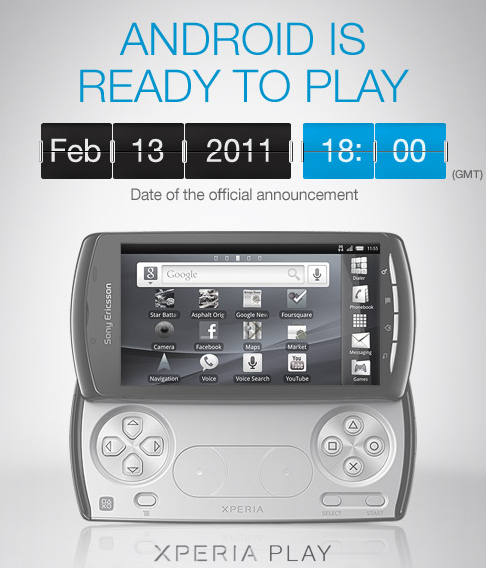 For all you UK readers out there though, good news, it is official that O2 will be stocking the Xperia Play, according to Eurodroid. No word on pricing for either North America or UK just yet. No matter who it lands on though, we will get one and beat it up for everyone in a review.

Update 8:49am Feb. 7th 2011: Great news for T-Mobile users, Pocket-lint is confirming that indeed it will be available to T-Mobile users, as well as O2 in the UK, for purchase this April! Vodafone will also be stocking the Xperia Play in the UK.

Update 10:01am Feb. 7th 2011: Phandroid is now also reporting that the Xperia Play will be arriving in Canada as well at launch. It seems the device has shown up on the Canadian Sony Ericsson website.